So, How Have You Been Keeping Busy? A Post-Toast Analysis

By Nicole, Nicole, and Mallory

Mallory: Hi pals! Nikki, I know you are currently sweltering in the land of Landlord Fighting, so please feel free to let this pass by you as th’ idle wind, which you respect not, but I wanted to set up an email for us to do a little post-Toast chat.

It’s been a year! What are you guys up to? What’s new and exciting in your lives? (I say this like I haven’t been at Nicole’s Utahn fortress for the last three weeks, or like I wasn’t just on a weird hand-cranked mountain rollercoaster with Nikki four days ago.)

Remember when we used to have this website? We wrote so much!

Nikki: I wish we were together always. And I cannot deny that I would sell various prized possessions to be back in Nicole’s beautiful aggressively air-conditioned mountain fortress right now; my air conditioner, as you know from last night’s desperate texts, is languishing and there is no joy in my life.

What am I up to? I am working a lot, editing and publishing wonderful writers at Catapult. I taught a writing workshop for Kundiman this summer, and will soon suit up for the Asian American Lit Festival. I’m also working (very diligently, hardly ever sleeping even, if my editor is reading this) on book edits! It’s hard to write a book while working and parenting full-time, turns out? I keep forgetting to do anything else, like eat regular meals or, just occasionally, ask my children how they are doing. Everything is happening at once, and it’s a lot, but I am glad for all of it.

(The Mountain Coaster was not actually hand-cranked, was it?? YOU DID NOT TELL ME THAT WHEN I AGREED TO GO ON IT.)

How are you both??

Mallory: My professional and personal goals are one and the same, which is to sort-of-always be in the same room with both of you, companionably on our phones, in a sort of Mild Internet Coma, for the rest of eternity, periodically waiting our turns to read something out loud to one another. This is mostly why we invented the Toast. (Do you capitalize the The in The Toast? I go back and forth.)

It was hand cranked in the sense that we controlled our own speed! It wasn’t, like…there wasn’t an old-timey prospector hand-cranking the entire coaster in some shack somewhere. You remember!!!

Pretty much all I’ve been doing is making videos on Instagram where I pretend to be both Joan Didion and Anna Wintour saying things like “Pasadena Pasadena Pasadena” to each other. Nicole??

Nikki: Okay, remember, YOU controlled your own speed. I think my speed controls were broken. There were two speeds in my cart: standstill and full throttle. (I am so bad with all things mechanical and it’s frankly embarrassing, I might edit this later)

Also I DO capitalize the “The” in “The Toast,” always. I don’t think I could go back and forth. I don’t have a strong feeling about it one way or the other, but as you both know I require consistency.

Mallory: Nicole is outside in the backyard picking up after her dog and she is eight months pregnant and it is hilarious.

RELATED: the other day Nicole and I had lunch at a VERY fancy restaurant that had peacocks just walking around (we both agreed that if we were male peacocks we would be furious at female peacocks for not keeping up their end of the hotness bargain) and she accidentally spilled coffee all over herself and my instinctive, immediate response was to burst out laughing, which made me so happy, because it means that I have lost the very very last of my Guest Manners when I am with her. The only people I would laugh at for spilling coffee on themselves are my immediate family and Nicole, end of list.

The other reason I know I have lost my Guest Status is that last week Nicole’s husband – whose approval I crave more than any other human being’s on the planet; I have asked MULTIPLE times if I can be allowed to make him eggs – asked me to help give their dog a bath. It was wonderful.

I can see the top of Nicole’s head through the window and I can’t stop laughing. I should help.

Nicole: I’m so glad the sight of me, hugely pregnant, bending over to collect dog poop was a source of genuine joy to you! I have enjoyed our time together so immensely that knowing you are departing on the morrow is not yet something I can process or acknowledge.

I have been fairly hermit-y this year, having over-committed to glorious mountain solitude and also television recapping (Poldark and The Young Pope for Vulture, with Outlander having been added to my plate come its GLORIOUS RETURN in September, The Crown for Decider, and Game of Thrones for ELLE.com, where I am also the newest relationship advice columnist). Which I like doing a LOT, by the way.

I miss The Toast often. The readers and each other, mainly, as opposed to actually Making the Site, but there are for sure so many times I have said “I wish we still had a website so we could tell the people about [strong positive opinion about Bruno Mars/enraged rant about Bruno Mars being only a FEATURED ARTIST on Uptown Funk/how Julio gets a shout-out in Uptown Funk AND That’s What I Like/the occasional non-Bruno Mars-related opinion.]”

Nikki: I really miss you both so much, which is weird because I saw you last week and we still talk and leave goofy comments for one another on Instagram, and if anything I talk with you more about our real lives than I did when I sent you dozens of work-related emails every day. (BTW, thank you so much for allowing me to guilt you into resuming your Instagram posts, Nicole! It is a daily joy to see you both there.) I also love that you both have advice columns now, because I can read them and imagine the responses in your voices, and it’s like you are warmly and patiently advising me personally on how to fix…okay, problems I don’t actually have, but still.

I miss The Toast community, too. I’m really glad I’ve gotten to meet some Toasties in DC and New York! Not to lead us deep into the ongoing wretchedness, but I think I missed the site most in the weeks after the election (they felt less like weeks, honestly, and more like one long, unbearable day). I know we’d briefly discussed putting up an open thread the day after, and then we decided not to, in part because we couldn’t stand the thought of that being the last post (and anyway, people were obviously finding support elsewhere; they truly do not need us). But the next day, and for days after as I was calling and texting and reaching out to friends, I thought a lot about the readers, collectively as well as individuals — how much I really wanted to talk to them and find out how people were doing. I’ve thought about that so many times since, that feeling of missing something with just a lot of love and no angst whatsoever.

Do you think now that the curtain of silence has been breached with new stuff, we’ll all feel free to duck in here and write posts now and again, when inspiration strikes (or we publish a book) (or when we just feel like sharing our deep and unresolved feelings about, say, WonderTrev/Star Trek crossover fanfic (sometimes I need to de-stress!))? Would you like a courtesy heads-up before I write and publish “How To Tell If You’re In Your Own Oversharing Memoir”?

Mallory: I miss you both too! I miss both you in a way that is hard to describe and is unlike how I have ever missed anyone else. I miss Nicole right now, and I am sitting across the room from her. I do feel a real sense of there is something the three of us have that I’ve never had with anyone else –– and that extends to everyone who’s been a part of the Toast, that includes Marco and Roxane and Jaya and to a lesser extent Jaya’s man Matt – that makes me feel like I’m always leaving summer camp and I’m worried that you’re going to forget me when you go back to school. And part of me worried, quite a lot I think, that when we ended the site something was going to vanish between us, and it’s been a real relief to see that it hasn’t. I NEED YOU BOTH SO MUCH. I LOVE YOU AND I WISH WE ALWAYS WORKED TOGETHER.

Nicole and I will always be doing the same things at the same times, probably. Every time I go to visit her I attempt very consciously to pick up more of her mannerisms and vocal tics. I find everything she does and says enormously charming and feel about her new stock sayings or turns of phrases the way that heroines in Edwardian fiction feel about the latest Paris fashion. “Oh, is Nicole saying ____ now? I can’t wait to show my friends at home.”

IN REGARDS TO what will happen now that the VOW OF SILENCE has been lifted, PROBABLY NOT super often? I have my beautiful dumb TinyLetter for thrusting my thoughts at the People now, and also the Toast runs on much shakier legs now that we’re only paying for bare-bones hosting costs, so I don’t want to break the old girl with overuse. But yes, obviously when your book comes out I want to see the watchfires of the Toast ablaze once more.

Nikki: I feel the exact same way about you all! I loved working with you and I was a little worried you wouldn’t keep in close touch with me when the site closed — not because you’re unrepentant monsters or anything, just because we so often talked about the site and that would be gone. I’m so glad we are still in one another’s lives now, a year later. And I’m very grateful to The Toast for bringing you into my life (which admittedly is a little weird because YOU TWO ARE THE TOAST, so I’m basically thanking you for bringing you into my life, but whatever, I will not attempt to clarify or take it back).

Also I need to hang out with you both again in the not-too-distant future.

Nicole: One of the best moments of my life was when Mallory and I picked Nikki up at the airport and I got to watch you two hug for the first time, having already had the privilege of hugging Nikki the previous summer. It was such a short visit but it felt so right just to be together and to talk and to get serious about the difficult things in our lives and also to laugh at my goofy-ass dog. Sunrise, sunset. Oceans rise, empires fall. Etc.

Mallory: I can still tell when you are quoting Hamilton, Nicole. 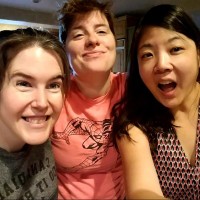 Add a comment
Comments Off on So, How Have You Been Keeping Busy? A Post-Toast Analysis