Following the death of Dr. Henry Morgentaler on May 29th, 2013, we reached out to a number of Canadian women of all ages to ask for their memories and thoughts on the subject of his life, work, and legacy. Few had met him, all had opinions. Here’s one. – Ed.

I heard the news of Dr. Henry Morgentaler’s death as I was driving the 34 kilometres into work. I had anticipated feeling saddened by his death; he loomed large in my life, although I only heard him speak in person once. I had no idea what he had been doing in this last decade but I suspect he was still performing abortions until he couldn’t see anymore. At least, that’s what I’d like to think. He was 90 years old.

I felt, surprisingly, not only sad but extremely out of sorts, and had a hard time concentrating on the work at hand that day and for several days after.

I first heard Morgentaler speak on a Saturday morning in the early 1980s at a pro-choice gathering in Kingston. I had recently taken a job as executive director at a local shelter for abused women and although I had spent most of my time before that challenging classism as an activist in Toronto, I was gradually coming to see myself as a feminist. I finally felt I had found a home. Connecting feminism and class-consciousness made sense of so many of my experiences and those of the people around me.

Morgentaler had already been promoting and performing safe abortions since the late 1960s despite experiencing harassment, violence and threats of criminal charges. He clearly wasn’t interested in making a big name or a lucrative career for himself. I remember thinking at the time that he seemed too good to be true. At the shelter, we spent a lot of time helping women build their shattered self-esteem and a sense of control over their own decisions. At that time, the only abusers I saw were men. The victims were always women. This made my worldview at the time very simple: women were good and men were bad.

Morgentaler was a mystery to me, a contradiction in terms — a selfless, helpful man — but he was so genuine and eloquent and confident in his beliefs that I came to believe he was the real thing. He helped me see grey, rather than black or white, in my own experiences, and I’d like to think his attitude was evident in my work after that.

That morning in May, hearing him speak, memories came flooding back. I wondered what things would have been like for my best friend if a Morgentaler clinic had been available to her back in 1972. She was a “good Catholic girl” who knew abortion was a serious sin. She turned up at my door unannounced, asking me to help her get to New York City to find a doctor who would perform one. She had been carrying this secret for a month and was emotionally and physically ill from the stress.

We rode a bus across the border into NYC (together, of course), with no idea of what we would do if we were stopped or ran into any kind of trouble. I was broken-hearted for her. It turned out to be a shady affair, and costly – I was terrified for her safety the whole time, but thankfully she experienced no complications.

We have never spoken of it since.

I too was born and raised Catholic, and like many other women in the late 1960s and 1970s took plenty of risks with sexual activity. I just happened to be one of the lucky ones and avoided pregnancy until, ironically, I was married and in my first term of a Masters program at the University of Toronto. The timing was all wrong; I simply did not want to have a child right then. One of my classmates at the time was in her forties with four children. I remember wondering what was wrong with me, why I couldn’t handle having even one. Look what she was managing!

I made an appointment with my doctor at St. Michael’s Hospital, which required my abortion to be approved by a committee. In order for it to be approved, it needed to be judged “therapeutic.” You might guess what the committee at a Catholic hospital decided.

When the doctor told me I’d been rejected, I was devastated. I put the question to him: what was I supposed to do now? His response was, “Well, it wouldn’t be that bad, would it?” At that moment, I realized what he had done: he had deliberately not referred me out, knowing full well that at St. Michael’s I would be sure of getting a negative response. He was delaying the process, hoping the clock would run out and force me to bring the pregnancy to term.

By then, I was already at 8 weeks and extremely scared. I knew I had only two choices: fight or flight. I let him have it, demanding he refer me somewhere else where I would be assured of a positive response. After ten more days, a mandatory psychiatric assessment, and another review committee, I had a “therapeutic” abortion at another hospital. I took one day off — it was a Wednesday — and was back in school on Thursday morning. Only one woman in the class knew what had happened and we are friends to this day, 35 years later. Makes sense to me.

For many women, there is still a huge stigma and lots of judgement about abortion. Many women still carry unnecessary guilt, which is so unfortunate, given that they made the best decision they could have at the time. I realize, however, that my abortion is a part of my life that I have shared with very few people over the years, probably due to fear of judgment or having to explain myself.

Several years ago, I found myself working for an open adoption agency and loving it. Adoption, particularly an open adoption, was never on the radar for me back in 1978. But it’s a viable and wonderful option for many women. The importance of true choice!

Through this work, I also met some amazing men. Women too, of course, but the men seeking adoption with their male (or in most cases, female) partners seemed extraordinary. They were not hung up on having their own sperm do the job, were very concerned about what their partners were going through and more than anything just wanted to be parents. They were also open to having the birth mother, birth father and birth grandparents become part of their extended family.

These men were thinking about what was in the best interests of this child that was about to be born. Just like Dr. Morgentaler, they’re men who are challenging patriarchy, not only to support the rights of their female partners as true equals, but to encourage other men to do the same. Black and white stunts everyone’s growth, often irrevocably. I like grey. I am grateful to Dr. Morgentaler. 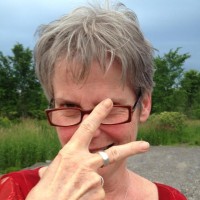 A lesbian feminist mother, former shelter, adoption and HIV/AIDS worker, currently juggling 2 part-time jobs as a legal assistant and pedicurist, living in Yarker, Ontario. She occasionally performs in the drag king group "Just Boyz" and is a major groupie for her singer-songwriter daughter and a hearty opponent of Stephen Harper.