1. A Portrait of the Author as a Young Fan

I got my first computer when I was fourteen, the summer before my freshman year of high school. It was a Dell, and it was blue, and it weighed around as much as my little brother. I don’t remember how long it took for the intoxicating freedom of private internet access to translate into the discovery of Harry Potter fanfiction, but it can’t have been longer than a few weeks. I used to creep downstairs after my parents had gone to sleep to plug my laptop into the dial-up cable in our family room and load all seventeen chapters of a story in different windows before scurrying back upstairs and reading them all in bed until three in the morning, always ready to snap the computer closed and pretend to be asleep in case anybody came looking.

Some years later – when my family had upgraded to wireless internet, and I had upgraded from FanFiction.net to Livejournal – I started telling myself that at some point I would outgrow fanfiction, and fandom in general; adults did not read or write fic, and those who did were weird. They wore capes and rarely cut their fingernails. I was not going to be one of them – I was going to read exclusively Serious Works of Literature, and discuss them in sophisticated coffee shops.

I kept telling myself this until I was around twenty, or twenty-one, and then I decided that persistent self-delusion wasn’t cute.

2. The Author Fails to Install Tumblr Savior in Time to Save Herself from That Dumb MTV Werewolf Show

Teen Wolf is the sort of show that I would have disparaged mightily as an actual teenager: high school isn’t anything like that! These “teenagers” are clearly all in their mid-twenties! Werewolves are stupid! Fortunately, I’ve gotten considerably less discerning as I’ve aged, and I can assure you that Teen Wolf, despite being a phenomenally dumb television program, is also totally awesome.

I mean, okay, yes, none of the kids on the show seem to ever have any homework (do you really want to watch fictional high schoolers do homework, though?), several of the actors are around twenty-seven, and werewolves are still pretty stupid. I mean, maybe that’s just the super embarrassing makeup. But whatever, guys, whatever. This is a show that actually included this shot of my Imaginary Boyfriend Tyler Hoechlin, resident adult on the show (he is, in reality, several years younger than some of the actors playing teenagers) as it is that delightfully, gratuitously dedicated to shirtlessness. (Also, it is really funny, and really heartbreaking, and just generally a highly enjoyable way to pass the time.)

It didn’t all happen at once: it was a slow build. Last summer, pictures and GIFs and general insanity relating to the show started springing up like a particularly invasive species of mushroom on my Tumblr dash. At this point, I had no idea what Teen Wolf even was, and I was…confused. Hoechlin was too muscled for my taste, and I did not understand the big deal about Dylan O’Brien, Tumblr’s Imaginary Boyfriend, at all. But the posts accumulated, and in spite of myself, I started to get curious – not so much about the show itself, but about the intense enthusiasm for it. People cared about these characters so fucking much. There were lots of feelings! Screaming! Sobbing! Flying into the sun!

Then, in early October, 12,600 words of pure beauty were delivered into my inbox, like a sign from God, and I was pretty much screwed:

“Oh my god,” Stiles says, the first time Derek takes off his shirt. “Wow. Can I—” his hand hovers over Derek’s chest for a moment, close enough that Derek can feel the heat of it.

“That’s kind of the idea, right?” he says, like he hasn’t thought about it, gone back and forth over it in his mind, whether it’s creepy and fucked up to get involved with Stiles or kind of okay, maybe. The rest of his life is so creepy and fucked up it’s hard to get a clear picture about whether it’s truly wrong to make out with Stiles, to seek him out when he needs help, to like the curve of his mouth, his impulsive, reflexive kindness, the gangling shape of his body that’s slowly resolving into something newly adult, narrow and tall, a body that he’s grown used to having at his back, that can swing a crowbar, fire a gun, make Derek lose what little resolve he has.

“Goddamnit,” I said to myself, miserably, and proceeded to read the rest in one sitting.

3. The Author’s Rapid Descent into the Land of Magical Thinking

Derek is played by Hoechlin; Stiles, by O’Brien. The hypothetical relationship between the two characters, known colloquially as Sterek, is by far the most popular aspect of the fandom; of the 19,845 stories classified as Teen Wolf on the Archive of Our Own, 13,313 of them are classified as Stiles/Derek – and that’s not even counting Tumblr. These characters are not, in fact, the leads of the show – unlike Tyler Posey’s endearingly moralistic hero, they are snarky motherfuckers with tons of fucked-up psychological problems, much better suited to supporting roles.

Slash – i.e. male/male – pairings tend to stretch the limits of plausibility a little due to underrepresentation of queer characters in the media, but they are usually based on something. Imagine my surprise, then, when I discovered, upon watching the actual show, that Stiles and Derek only shared between four and five minutes of screentime alone together in the entire first two seasons of the show. (The third season, which premiered at the beginning of June, has given them some banter, but no alone time.) Most of these minutes constitute Derek threatening Stiles, slamming him against hard things in a distinctly unsexy manner, and otherwise appearing to find him deeply aggravating. When, in a recent episode, the characters believed Derek to be dead, Stiles was indifferent. They have a good rapport, but basically no sexual tension: this really is one of our greatest achievements in delusion, as a subculture. I was impressed, in spite of myself.

But despite the fact that there are a whole lot of rabid Sterek fans out there who are incredibly invested in their pairing “becoming canon” – many of whom have turned against a new female character introduced as a love interest for Derek in a decidedly ugly fashion – the simple fact of the matter is that it really, truly doesn’t matter whether the characters ever express more than aggravation for each other on the show: those episodes are merely the jumping off point for an incredibly rich and creative community that produces writing, art, and thoughtful commentary and criticism at a truly extraordinary speed.

The characters on Teen Wolf are well-sketched outlines of psychologically complex beings: their childhood traumas are the core of the show, but they spend more of their time running around and trying to avert danger than talking about their feelings. This is appropriate for a teen action show but not as moving as, say, a novel that probes the depths of a flawed consciousness. What fandom does, essentially, is provide the psychological depth necessary to achieve that kind of emotional catharsis, and it has done so in this case by creating a relationship that really doesn’t exist on the show at all.

Fandom is a hive mind: it’s the ultimate communal creative experience. There has got to be somebody out there who was the first person to suggest that Derek and Stiles should get together – hats off to you, Random Internet Stranger – but it doesn’t really matter who that person was. What matters is the fact that the hive-mind seized on this idea and fucking ran with it. There are thousands of people across the globe living with Stiles Stilinski and Derek Hale in their heads, not as stagnant finite entities (as is the case with, say, well-known characters from classic novels) but as eternally dynamic and changeable, if distinct, beings. With some substantial help from showrunner Jeff Davis, we have made up these people, worked out how they interact with each other, and produced massive quantities of fiction backing up our vision. Who’s to say that’s less real than what we see on TV?

4. The Author Grows the Fuck Up

I got into fandom because I was a lonely teenager, and because thinking about fictional people seemed preferable to thinking about my own messy, complicated life. In thinking that I would outgrow it, I think I was imagining a future version of myself who was completely content with her life, who didn’t need any kind of distractions, a kind of Platonic ideal of myself that seemed inevitably, distantly attainable – but only once I grew up.

I am only twenty-three – hardly all grown up – but that idea seems both hilarious and kind of pitiable to me, now. I spend a lot of time thinking about my problems, but I also spend a lot of time thinking about fiction. I don’t really know how to be a person without filtering my life through stories, as a creator and an audience member. I like Teen Wolf because it’s entertaining and the actors are hot, but I like Teen Wolf fandom because the characters are all fucked-up messes replete with childhood trauma. I wound up writing two long pieces of fanfiction about that very subject, one about Derek and one about Stiles, and at the end of each piece I realized that even though I had been writing about the characters, I had mostly been writing about myself.

I don’t think I ever would have been able to grasp that, as a teenager, but I can now. Fandom, it turns out, is not just a child’s hobby: it’s something like therapy, only a whole lot more fun.

I recommend trying it out.

Next Time: A Brief History of Slash. 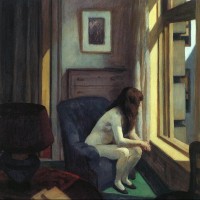 Morgan Leigh Davies is a writer and the editor-in-chief of Big Bang Press. She has read a lot of books, and possibly even more fanfiction. She lives in New York, and you can find her on Tumblr and Twitter.