I’m working in my kit again. I thought I could escape, but then my phone started nagging me. So I sat down to answer it and to reply to that other thing, and to edit that one thing and to make that other thing. Sitting still is hard. I just want to go ride. The internet is such a dick sometimes.

So here I sit, my padded shorts feeling like diapers in my cushioned office chair. On the bike, I don’t notice the padding. Off the bike, it shifts and bunches like an oversized maxi-pad. Finally, I pull up the straps on my bibshorts and zip my jersey.

If you’ve never seen bibshorts, they look like shorts with suspenders attached. Before the time of Lycra, cyclists wore wool shorts with actual suspenders and leather chamois sewn into the crotches. The wool chafed and sagged and the leather turned stiff and coarse like heavy grain sandpaper. These days bibshorts are a weird, one-piece contraption, the parts sewn together painstakingly by women in a factory somewhere in Romania. The sewing process is not easy. The lycra is pieced together and the seams placed just so. No one wants a seam in the vagina.

I’m a Title IX girl. I swam in college, my team funded because the law required it. Eventually I grew bored of chasing the pool’s black line and turned into a mountain bike racer. I wasn’t really meant to be a bike racer; I have long arms and short femurs. But sometimes it’s so freeing to do the things we weren’t meant to do. My friends and I used to say that women’s participation in sports was one of the last battlegrounds of feminism. We were more optimistic about feminism then, and in truth, about life.

The wheels thunk as I ride down the stairs to the sidewalk and shoot through the grass to the street. The bike doesn’t stop especially well. Somewhere between the emails and interview transcripts and editing corrections and can you just do this one thing, I need to adjust the brakes, but I haven’t gotten around to it. It adds excitement to the whole thing to ride a bike that doesn’t really stop. You just go faster.

There’s a car coming, and the brakes being what they are — or aren’t — I hit a hard right turn with more speed than wisdom. It’s a constant fight with gravity, the bike. Maybe if I’d actually shown up to physics class instead of going to the beach, I could explain how all those centrifugal and centripetal forces work. But I didn’t. So I just turn the bike, hope the tires hold, and pedal on.

There’s a dirt playground not far from where my office chair and my laptop sit, left for now to their own devices. It’s nothing epic, not the kind of thing you’d see in the photos in a magazine where riding a mountain bike is all tall trees and big jumps and deserted trails a long way from anywhere. It’s just a park that used to be a landfill. From the right angle, through a well-chosen Instagram filter, it might almost look pretty.

The place doesn’t matter all that much, though. You just have to get out there. In more than twenty years as an athlete, that’s the thing I’ve learned. Every year in January, I see the New Year’s resolution people crowd into the gym. I’m happy to cheer them on, but most of them are gone before the month is over. You just have to go — go to the gym, go to the pool, go on the bike, go for a run, go surf.

And if you just keep going, one day after the next after the next, it becomes as essential to your life as the air you breath and the chocolate bar you keep in your bag for emergencies.

I fold the bike through the downhill switchbacks and feel the tires catch and release in the loose soil. My attention strays on a straight, fast section, and I superman into the bushes. Wonder Woman never does stupid shit like that. It’s the kind of crash that’s funny until I have to pull the prickles out of my sports bra. On the way home, my dirty shirt gets funny looks from the tourists strolling along the boardwalk toward their cocktail hours and steak dinners.

Facebook is convinced I’m a lesbian, which is the painful kind of cliché that only your best friend’s mom or a faceless data-crunching algorithm could possibly believe. Oh, you’re a woman! You play sports! You must be gay! It stretches the elastic of convention too far, apparently, to be a straight woman who likes to get sweaty. Forty years after Title IX, it’s all still a little too subversive.

In truth, women athletes occupy an uncertain space in mainstream American culture. Open a women’s magazine and athletic women are few and far between. Fitness tips tell you how to make your ass thinner in five easy steps. Try if you can to find cute, feminine clothing that will accommodate a swimmer‘s built shoulders or jeans that will fit a bike racer’s rock-solid legs. Catalogues show smiling women with perfect hair running uphill like gazelles in a Disney movie. Sometimes they go surfing in fluttery dresses and straw hats. They’re all so shiny. It’s not bad, shiny. It just isn’t me.

I pedal my blue Schwinn over to the coffee shop and the guy behind the counter asks me if my hair is ever dry. It is sometimes, but not that often. I am in awe of my athletic friends who are good at fashion. They can win bike races and walk in stilettos. I’ll go ahead and admit that I’m not one of them. I don’t own a hair dryer. I had one, but it broke, and I never got around to buying another one. I have carbon fiber shoes, hand-made in Italy, but no hair dryer. I wear board shorts and flannel shirts a lot. No doubt Facebook knows all about that, too.

Sitting at the hair salon, I flip through the beauty magazines. I like fashion even though I can’t actually do it. The pages are an endless succession of creams and concoctions. They promise eternal youth and a lineless face. I catch sight of myself in one of the surrounding mirrors. No magic potion could possibly erase the marks of the thousand hours I’ve spent staring at the horizon waiting for set waves, of the miles I’ve ridden in the driving rain, or of the summer days I’ve marinated in the pool’s chlorinated waters. Trace the contour lines of my face and read the stories of my life’s adventures.

This is not to say that women athletes are immune to the pressures that try to dictate how we look and who we are. If we have an Achilles’ heel, it is our ruthlessness toward our own shortcomings and our relentless drive for perfection. The competitive engine that wins races and crushes interval workouts becomes destructive when we turn it against ourselves instead of our rivals. I’ve seen friends starve themselves to go faster. It works in the short run, which makes it all the more seductive. Then it exacts a harsher toll. I once knew of a women’s swim team whose coach weighed his athletes before practice each day. Talk about feeding our worst insecurities.

Then one day you realize that what your body can do is far more important to you than how it looks. This is the best revelation you’ve ever had, and you’re surprised it doesn’t come accompanied by the flourish of unseen trumpets. It should. Sure, you’ll still be frustrated when you can’t find a party dress that fits, but it’ll be a temporary irritant rather than an existential crisis. You’ll maybe still wish you could be thinner or prettier. Don’t most people wish for that at least once in a while? But from now on, it won’t consume you. Instead you’ll go outside and in the glowing embrace of a warm afternoon sun, you‘ll play with joyous abandon.

In this part of California, the coastal mountain ranges rise steeply, forced upward by the violent collisions of the earth’s shifting underground plates. When it comes to topography, California is such a drama queen, all massive highs and plunging lows. Bounded tightly by the ocean and the mountains, the town is built in the narrow floodplain of a seasonal river. Ten miles out to sea, new mountains push up through the Pacific and form the Channel Islands. Fifty miles overland lies the San Andreas fault that runs the length of California, twisting and torqueing the landscape all along the way.

From my doorstep at sea level, I can climb 4000 feet in about an hour of pedaling. The road to the summit is carved into the mountain’s crumbling shale and soft sandstone, the elements of a prehistoric seafloor now pushed up and exposed to the light. On the downslope side, the cliff drops with elevator-shaft suddenness. Each winter, the run-off washes away big portions of the pavement’s fragile ribbon. Each spring, the construction crews put it back. It’s as if Sisyphus had a million tiny rocks slipping through his fingers.

I climb until I reach the top or until my legs demand that I stop. The legs do that sometimes, they make demands. And the catalogues, they lie. It’s not pretty, riding a bike up a steep hill. It’s sweaty and difficult and slow and torturous. A bright yellow sign clings to the cliff’s edge and warns of falling rock. I push onward until I reach the sign that inspires more fatalism than caution. The rocks may fall, but I’ll still be right here climbing.

Here at the upper boundary of the California Bight, the coastline bends to face south and the mountain turns its face unflinching toward the sun. As the road switchbacks upward, the temperature rises. There is no tree cover and the blanched grasses gleam and shift. Lizards sit baking on the pavement, flicking their tongues. A heated wind blows downslope, and my unzipped jersey billows out behind me. Sweat rolls down my arms, and drips off my handlebars. I ride headlong into a hair dryer’s belly.

I reach for more gears, but there aren’t any. The steep gradient pulls at my legs and gravity drags me backward. My legs feel like shit, but I keep going. I’m kind of stupid that way. It strips things down to the essentials, climbing like that. Nothing much matters except keeping the bike moving forward, taking one breath after another after another. Looking down, I watch mesmerized as the pavement blurs and dissolves beneath my wheels.

Then it’s over. From the top, I look down at tiny buildings. The cars flash on the freeway far below and the infinite blue of the ocean overflows an endless horizon. Back down the mountain, the road unwinds all in a rush. The world spins, land, sea, sky in a vertiginous blur. I slow to let a car get a gap, then open it up. The corners are perfectly, irresistibly banked. It would be wrong to go slow.

Down through the neighborhoods with their million-dollar views, I ride back to my shack with the bikes stacked in the front room. I sit on the couch in my sweat-drenched kit, my feet propped on the battered coffee table, a cold drink in my hand. And for the moment, the outside world with its demands about what I should do and who I should be doesn’t seem to matter much at all. 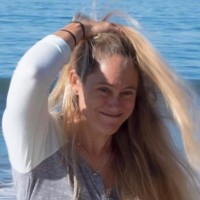 Jen See is a freelance writer. She lives in Santa Barbara, California and has more bikes than sense.