It was in the early afternoon, when the sun was still blazing. Black birds, like the ones I read about in the arms of the canon that had come to life simply to confront me, murmured overhead. To me, they were like eagles or hawks or another variety of heroically raptorial birds. In some version of reality, they were probably small, island birds that ate slugs or coconut scraps or dog shit. I was in my bikini; well, the bottom half of it (Saint-Martin is France, after all). Like I said, the sun was strong—the strongest it had been all week—which was fitting, or unfitting, since it was Christmas Day. It was hot enough to forget, but I hadn’t. For one long second, I thought that the birds were going to dive down and attack me, peck me until I died, or worse, bled. They travelled in packs—packs of four, five, six even—and I couldn’t help but define that moment or have the moment be defined by a June Jordan poem in which a hawk desires her dying body: He makes that dive / to savage / me / and inches / from the blood flood lusty / beak / I roll away / I speak / I laugh out loud / Not yet / big bird of prey / not yet.

Me, I was smoking packs of French cigarettes, which I had quit weeks before, and drinking packs of Trinidadian beer—without any visible effect—which I never thought to quit. The pool, which is the same shallow depth all the way through, was a few steps away. It was big enough for two, maybe three long strokes given the size of my body.

At the time, my skin conditions, if you can call them that, were out of control. That’s what I told myself, at least, to justify feeling out of my body, looking for ways to feel more erotically in it. All the same, my psoriasis was significantly better than before—less red, less flakey, less irritating, less evident. But the fungus on my back had come back. Spots, perfect circles of white discoloration that had made my best friend in high school gag. I also developed these darker spots on my soft, round face that I knew were attributed to the sun. But still, I couldn’t spend less than four hours a day, always including high noon, in the tenacious Saint-Martin sun. After all, it was the doctor who said the sun sometimes helps psoriasis. And it had helped my psoriasis. The price you must pay. For beauty? No. For preferring one flaw to another.

I was acutely aware of anything different that would make itself known on my body. My body had become a thing to manage, a thing negotiable between my general practitioner and me, and then between me and the several dermatologists she referred me to. Since my dermatology appointments were, for the most part, covered by government health insurance, I imagined the doctors squeezed me in between cosmetic dermatology procedures, botox, laser surgery and the like. It had taken them a year to figure out what I had. “It’s harder to tell on darker skin,” said my derm-cum-reality TV host. I asked for another referral almost immediately.

When I was first prescribed topical medication, I would lay out each cream, each ointment, each steroid in a sort of military line. I would pick one up gently, apply liberally (or not, depending on the tautological instructions) and then place them down, just as thoughtfully. But as time passed, and I saw a bit of improvement, I would choose to forget my medications. If I did remember, I would slather it on the bumps, on the redness, the irritation and then shove my clothes over it, leaving white or tarred marks on my clothes.

Professional help cuts both ways; it “helped,” aesthetically speaking, and made disease seem controllable but it often also brought a scrupulous attention to every potential symptom or cause. In other words, it was simultaneously a sigh and a reason to sigh. The persistence of it all weighed enough but was increasingly uncountable.

Late that summer, I had decided to go back to wearing make-up again. I had gone six months without it, for no reason at all it seemed. My mother, flying from her home in Toronto, gave my fifty euros and one hundred U.S. dollars for my twenty-first birthday. I hadn’t spent a penny here and, well, wouldn’t for a while.

The local police force in Saint-Martin is different from les gendarmes, which I won’t translate because it’s untranslatable. And also, technically speaking, a word in English. Both the local police and les gendarmes are known for limited responses, depending on whom you ask, who wants them there. More often than not, the gendarmerie set up stops in the roundabout just outside of Marigot, the capital on the French side where the tourist boats come in and out. And often, they conduct control in Sandy Ground, where a fair amount of the black Saint-Martiners live. Naturally.

They have big trucks that resemble mini-army tanks. To someone who has never seen an army tank. They methodologically rake the ground to seize drugs. They being la gendarmerie, of course. I heard there were people who suggested les gendarmes should have a constant presence in Sandy Ground and create a permanent branch there.

Black American artist and writer Romare Bearden is connected to Saint-Martin and perhaps, just perhaps, disrupts paradisiacal accounts of the tropics-as-inspiration. In a different way he made the trope all the more inane, which is what tropes tend to do, depending on how you use them. When he died in 1988, a friend of his told the New York Times, ”St. Martin meant more to Romare Bearden than Tahiti ever meant to Gauguin.” Bearden’s wife, Nanette, was born on Staten Island, but her parents came from the island of Saint Martin. Her mother, from the Dutch side, and her father, from the French.

The year before he died, Charles H. Rowell, founder and editor at the black journal Callaloo, interviewed Bearden and explained how the interview came about: “He had been ill, he told us, and was recovering quite well. In a few days, he would be off to his Caribbean home on the French side of St. Maarten. It was there, not New York, he said, that he would give me the interview I was determined to tape. New York, he said, was for working, for painting, not for talking.”

I didn’t sleep a wink that night. I had gone to bed early, maybe around 9 p.m. because I was tired and because I had to wake up at 5:30 a.m. the next morning to go walking via Dawn Beach on the Dutch Side.

I got awoken, in the pitch-black, deep night, by the banging of metal shutter doors. I awoke abruptly, realized it was the family two houses down, Patricia, and her two kids, Sandra and Sadie. Patricia is white and her kids are not. This matters.

“Go away!,” yelped Patricia. It was a terrifyingly canine sound. A sharp shout that was so real it almost felt faked. It had a tinge of childishness, a tone that evoked true fear, a true cry for help. There was always something about Patricia that was overbearingly dramatic. And yet.

“Go AWAY!,” she repeated. “You tried to come into our house.”

I wasn’t sure if that was a gesture toward reconciliation or a tool of self-consolation, like a toddler sucking her thumb amidst a parent’s wail. Again, she banged on the zinc accordion hurricane shutters, trying to get the attention of the others. Who were the others? I wasn’t sure. In those tropics, we lived in a dense condo compound that people didn’t go to for the sake of remoteness, but still, it seemed like everyone kept to their own.

It was only 11 p.m., an hour that back home, in the city, would seem like the beginning of a night, a time that wasn’t known as “unsafe.” All times weren’t, depending on where you were. Here, the night never settles but seems on the verge of either sundown or daybreak.

After the alleged intruder called Patricia racist and Patricia defended herself because, LOOK!, her black kids!, the authorities came, whether the local police or les gendarmes, I’m not sure. I hadn’t left my bed.

I didn’t sleep a wink that night, of course. How could I? And what if I had? A wink is nothing at all, I thought; it’s half a shut eyelid. 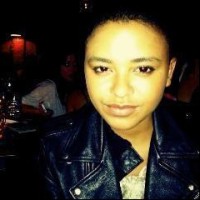 Tiana Reid is a writer and editor living in Brooklyn.