Sidekick No More: Writing Asian Superheroes and the Challenges of Representation

As a child, I didn’t like Jubilee very much. I know this doesn’t sound like a big deal. For some of you, it might sound like no kind of deal, so to explain: Jubilee is a member of the Marvel superhero group the X-Men. She is young, Chinese American, and known for delivering sassy one-liners while wearing a bright yellow trench coat and shooting fireworks out of her hands. She was also prominently featured in the ’90s X-Men cartoon that served as a comic book gateway drug for many nerds of my generation.

I do love Jubilee now. I’ve come to adore her vibrancy, her brashness, and her affinity for big earrings and bubblegum. But sometimes I retcon my memories so I loved her then, too. Because really, it seems like I should have.

That’s the problem. I should have.

Growing up as one of the only Asian Americans in my tiny hometown, I longed for representation in the comic books and sci-fi/fantasy stories that served as my most beloved entertainment. I didn’t even know if it was possible, but I was always looking for a heroine to identify with, reaching out for something—anything—that would allow me to be more than The Other, the one who got constant queries about her country of origin. Jubilee should have been my savior—Asian Girl Doing Stuff! And with my favorite superhero team, the X-Men! Not an exact mirror (I’m half-Japanese), but I couldn’t afford to be picky.

I know that wasn’t her fault. She’s only one character, and can’t hope to represent All Asians Everywhere. But to my younger self—who had felt invisible for so long, who tended to see faces like hers worn by bad stereotypes or not at all—Jubilee represented a new kind of disappointment. My younger self felt let down by the very thing that was supposed to save her.

When there are few representations of something, the ones that exist matter more. While I can convey the reasoning behind this from an academic standpoint (stories are important; we internalize who gets to be the hero; if we never see ourselves as the hero, we never believe we can be that in real life), it’s harder for me to put the emotional side into words. I know it’s a visceral thing. I know my heart still beats faster whenever I see a woman of color onscreen or on the page getting to Do Stuff. Looking for that representation feels like searching for a wifi signal in the desert, all of your internal circuits lighting up when you finally find it. Suddenly all of the hopes you’ve held onto for so long get pinned to that one character. Because if she’s not what you want, what you’ve been reaching out for so desperately, how long will you have to wait for another character to come along?

In 2015, the ABC sitcom Fresh Off the Boat premiered. Based on chef Eddie Huang’s memoir, the show chronicles the lives of a Chinese American family living in ’90s era suburban Orlando. Before it aired, it felt like Asian America was holding its collective breath. There was cautious excitement, but also major anxiety: that sickly feeling marginalized people get when they’re about to see themselves represented on a larger stage. Will the representation be good? Will it be stereotyped? Will it set us back so far that we’ll have to wait decades for another chance in the spotlight?

Jenny Yang, Phil Yu, and Joanna Lee coined a term for this anxiety: “rep sweats.” I connected to the concept immediately—what marginalized person hasn’t felt that specific brand of nerves? But as Fresh Off the Boat aired and many of us finally let out that breath and declared Jessica Huang our new queen of gif-able moments, I didn’t realize what should have been obvious: there’s a whole other way to experience that fear.

Here’s one thing I did pick up from Jubilee: I’ve always been comfortable being the sidekick. TV, movies, and other media told me that was all I could be. I was a great wingwoman at college parties, a fabulous Background Girl #2 in high school drama productions, a reliable shoulder to cry on whenever friends were going through crises. I flew under the radar and liked it. I made myself smaller so the Wolverines in my life could take center stage.

I eventually wrote and sold a novel about another kind of sidekick: the personal assistant to a glamorous superhero. I made them both Asian American. I created the Asian Girls Doing Stuff I’d always wanted. And I was proud of this, but as word about the book started to get out, another feeling got mixed in: a sickly, anxious gut-bubble. I was having the same worries about representation, but from the other side. Instead of worrying that the entertainment I consumed elevated bad representation, I worried that the entertainment I created did the same. Or that people longing for mirror characters would feel let down by my Asian Girls Doing Stuff the way I had with Jubilee – because while I never thought she was a stereotype, she still wasn’t everything I wanted.

As a writer, I know it’s impossible to give everyone everything they want in a character. But an irrational part of me felt pressure to accomplish this somehow, because I know what it’s like to be on the other side of that want.

As more and more Asian women—some longtime sisters-in-arms, some total strangers—told me how meaningful it was for them to see a book starring Asian American superheroes come into existence, I saw everything I’d always felt reflected back at me: the longing for representation, the need for characters who look like us, the hope that we’ll finally see ourselves in a way that’s centered, not stereotypical, and not Othered. I felt uncomfortable being on the other side of that hope for the first time. Because I still thought of myself as a sidekick, and people don’t look at sidekicks with hope.

I don’t think I ever expected to matter. Women of color are constantly told they don’t. That had been the guiding force behind my lifelong sidekick persona. So for a while, I tried to ignore the rep sweats: to shrug them off, shove them down, and not make them matter so fucking much.

But they finally came pouring out one day in a coffee shop in LA, where I met my friend, the aforementioned Jenny Yang. One moment we were talking about something seemingly benign, and the next I was crying, blubbering about how I remembered what it was like to want representation so desperately and then end up feeling disappointed by characters I couldn’t relate to or found hurtful and offensive. I told Jenny how I was afraid of letting people down. How I was scared of putting “bad” representation out there and doing irreparable harm. How I kept trying to make this not matter so much—to retreat back into sidekick mode—because admitting that something matters is admitting it has the power to hurt me.

Jenny looked at me with such empathy and understanding. And then she straightened her spine and told me it was good for things to matter. That for those of us who have been waiting for so long, there was no way to make representation not matter—whether we’re coming at it as a consumer, a creator, or both. She was Coach Taylor, I was a downtrodden football team, and she dragged out the motherfucking whiteboard and wrote STATE in big block letters.

“I know you’re feeling so much right now,” she said. “But you’ve got to remember something: we’re all in this fight together. You don’t need to do this alone.”

I realize that trying to get rid of my fears twisted me up into more knots than simply living with them. The truth is, I do feel a fierce responsibility to the Asian American communities I love so dearly—my girl gangs, my LA arts circle, all the established Asian American authors who have welcomed me into their world. Watching these people put themselves out there so fearlessly makes me feel like I can do the same. Like I must do the same. And that means learning to live with my complicated feelings about representation because I’m trying to be there for them, because I’m acknowledging that these things do matter. I own my damn rep sweats.

I am one person. I know I can’t represent All Asians Everywhere any more than Jubilee could. I can’t give everyone everything they want and need in art, in stories. But I hope that those who don’t find what they need in my stories will find it elsewhere, that we’ll keep working toward having a variety of superheroes to choose favorites from. Thanks to the existence of Kamala Khan and Melinda May and Daisy Johnson and Silk and Cassandra Cain, Jubilee isn’t the only game in town these days. Like me, she isn’t alone anymore.

I do love Jubilee now, and I can’t help but think that if my younger self were growing up today, she would, too. She would also marvel at the fact that I have become an Asian Girl Doing Stuff in real life. She would tell me that I’m no sidekick. She would tell me to come out from under the radar, even if it means anxious gut-bubbles, tears in coffee shops, and worries about representation. She would tell me not to be afraid to let things matter. I like to think I would listen to her. 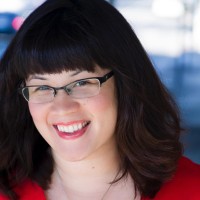 Sarah Kuhn is the author of Heroine Complex—the first in a series of novels starring Asian American superheroines—for DAW Books. She also wrote The Ruby Equation for the Eisner-nominated comics anthology Fresh Romance and the geek rom-com novella One Con Glory.