The First Strike: Talking to Mary Kay Zuravleff About Lightning and Writing

When I spoke with Mary Kay Zuravleff a few weeks ago about her new novel, Man Alive!, I began by asking how she decided to open her book with its main character, Owen Lerner, getting struck by lightning. Zuravleff looked almost embarrassed. “The idea came from Oliver Sacks,” she admitted. “He wrote a piece in The New Yorker about a surgeon recovering from a lightning strike. But that’s rare for me. I usually just dream things up.”

Man Alive! may have sprung from Sacks’ article, but Zuravleff dreamed her story very differently. Sacks’ subject, Tony Cicoria, became obsessed with piano music after getting hit by lightning. Owen becomes obsessed with barbecue. Why? “It just came to me,” Zuravleff said–an answer she gave over and over during our interview. She told me that she considers imagination “a form of intuition” and that her ideas for character and plot come, as she put it, “in the first strike.” For example, she knew that Owen’s sons were twins before she knew that the less-favored brother would be the one to resuscitate his electrocuted father, which sends his twin into a spiral of self-doubt and self-harm. She decided that Owen was a pediatric psychiatrist before she knew that the damage from the lightning strike would likely produce symptoms that mirrored his autistic patients’. And the beauty of Man Alive! is that the power of the random comes through just as clearly as Zuravleff’s tight authorial control.

Getting struck by lightning is an excellent example of random chance. Owen is putting a quarter in a parking meter when he’s hit. To his family, the strike is a traumatic accident, yet as Owen recovers he begins to see it not as an accident, but as a gift. He buys fulgurites–glass tubes that form when lightning hits sand–online, and when the Lichtenberg figures that the lightning made on his arm fade, he reproduces their branching lines first in Sharpie, then as a tattoo so that, Zuravleff writes, “Owen will bear the marks of belonging to the lightning.” As far as Owen is concerned, he didn’t just happen to get electrocuted. That bolt of lightning could have had any of the men at any of the meters in Rehoboth, Delaware, but it picked him. It may have temporarily scrambled his brain and burned a hole in his hand, but it gave him new empathy with his patients, and of course, it gave him his new love: barbecue.

Owen’s appreciation of the random mirrors Zuravleff’s. When his barbecue obsession occurred to her, she took the idea and ran with it—and so does Owen, who, within weeks of leaving the hospital, digs a grill pit in his backyard. As a premise for a novel, lightning-induced barbecuing sounds goofy, improbable. It is goofy and improbable, and that makes it charming. But it’s creepy, too. Owen barbecues because the smell in the pit “occasionally matches the one in his head [during the lightning strike], when he felt a rapture he cannot help chasing.” When he starts comparing his wife, Toni, to a side of meat, his obsession becomes genuinely frightening—until Toni starts to get accustomed to it, when scary blurs into sexy. And then Zuravleff describes the meals Owen cooks, the chili-rubbed buffalo tenderloins and cured glazed bacon. When his friends come over they “clean their plates, pick their teeth, ask for doggie bags.” One dinner guest standing at Owen’s barbecue pit says, “‘Heaven smells like this,’” and I believed her, because by that point the book was making me hungry as hell. It’s hard to find a way to make a story quirky, funny, dark, and sensual all at once. Zuravleff dreamed up a fantastic one, and she trusted herself as a writer enough to run with that impulse.

Zuravleff leaves all the ends in Man Alive! loose. When the book is over, Owen is still recovering from the lightning strike, and so is his family. Toni has no idea how to deal with this new version of her husband. The three Lerner kids don’t know what to make of their more childlike father, or of their burgeoning adult selves. None of them is on the path they had intended to follow. Nothing feels secure, but there is a confidence to the novel’s final chapter. The Lerner siblings, briefly isolated, reunite and start to support each other again. Owen starts thinking about ways to use barbecue as therapy for his patients. Toni maybe, finally, starts to relax. However, these are beginnings. They give us some security, but they aren’t answers. How could they be? After all, this is a book that begins with a lightning strike, and as many times as Owen asks, “Why me?” or his family, “Why him?” there can be no response.

Still, the ending is satisfying. Zuravleff says that her books begin with questions, and so I asked for the one at the heart of Man Alive! Her response: “How much are you allowed to change if you want to stay in the same family—and what if you don’t?” On one side there is fear of abandonment by one’s family, and on the other, the fear of being nailed down. Toni and her children want the old Owen back; Oven wants his family to love this new version of him, and by the end, they do. He’s allowed to change, but the process isn’t easy for him or for the people he loves. Along the way there are broken bones, bad boyfriends, bowls full of pills. Everyone in the family is damaged, but at the end of the book, they’re still in. And after reading over 300 pages in one sitting, so was I. 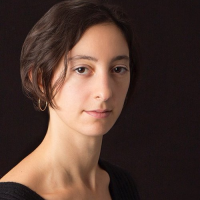 Lily Meyer is a MA candidate in Creative Writing at the University of East Anglia. She grew up in Washington, DC.