Two years ago I spent my summer reading a great history of the Riot Grrrl movement. The book, Girls to the Front: The True Story of the Riot Grrrl Revolution (Amazon | Indiebound) by Sara Marcus, chronicled the rise and short reign of Riot Grrrl’s prominence in America by following some of the young women at the front of the movement.

After finishing it, I downloaded some Heavens to Betsy and Bratmobile songs and sat on my back porch, wishing I could go back to 1993. The lyrics were so raw and evocative, I could picture girls shouting into microphones while furiously strumming guitars in basements packed full of other girls dancing their hearts out.

I wondered what it was like to be at one of those shows. Or to get a zine in the mail that said all the things you wished you could to the people who were in control of your life. I tried to imagine what it must have been like to feel chills the first time you read the Riot Grrrl Manifesto, knowing you were not alone, that there were others like you out there.

I never got to be a teenage girl. I am a transwoman who did not come out until I was in college and then did not transition until I was old enough to rent a car.

Even though I try not to think about it these days, because transitioning later in life is as much a part of who I am as being transgender in the first place, I really regret never having all the typical teenage girl experiences: having girlfriends I did everything with, getting dressed up for the prom, having a first kiss or a first date. I had my own boy versions of these experiences, of course, but when I transitioned I left most of that behind me. In a way, my life started over again at 27 when I let myself become who I really am.

Reading Girls To The Front only made me feel even more like I missed that boat (filled with maxi pads, liquid eyeliner, fishnets and chiffon prom dresses) entirely. It made me really sad, but I accepted that I would never get to experience what it was like to be a part of Riot Grrrl for myself.

It never would have occurred to me that I would get to live out my Riot Grrrl dreams in a video game.

The game is called Gone Home, and it’s set in late 1995. You play as Katie, a girl who spent a year backpacking around Europe while her mom, dad and kid sister, Sam, moved into a giant house in the Oregon hills. You arrive home late one night to find the front door locked and to your surprise, nobody waiting for you.

In order to find out why nobody is home, you start looking for clues. The house is old and dark, and there is a massive rainstorm, creating a persistent background of rattling windows and cracking thunder. The game has you play in first-person perspective, and as you move from room to room, you often have to scramble through pitch dark for the nearest light switch or lamp.

Littered throughout the house are scraps of ephemera: bills, to-do lists, magazine articles clipped out for later, letters from school and work. The story is told through these objects and through a set of letters from Sam to Katie presented as narrated diaries.

The diaries help keep the plot moving, but the real meat of the story is in these things you pick up and study. You find yourself having to read between the lines to piece together what is going on, and often the most tragic of events are only hinted at with the vaguest of clues. In this way, Gone Home tells its story through induction, something that most other video games have yet to figure out. It’s the kind of story that almost has to be told through a game.

The story begins with Sam starting in a new high school after your family moved. You quickly realize she is going through her own teenage rebellion phase, finding notes passed in class, letters to your parents from the school that indicate Sam has fallen in with a new, rougher crowd, class assignments turned into mocking parodies.

And then you find the first cassette tape.

Through an audio diary, Sam tells you that she was given the tape by her friend Lonnie, who said “You’re gonna like this one.” So you insert it into a tape deck and with that familiar tape hiss you hear a girl sing:

The guitar roars to life with a killer riff and the drums kick in a second later. You instantly understand what Lonnie was talking about. It is remarkable that the makers of Gone Home went to the trouble to license actual Riot Grrrl music to be used in the game. This means you-as-Katie get to be right there with Sam as she hears this music for the first time and Riot Grrrl becomes her life.

As the game progresses, you find out how Sam began to learn more about who she is and what kind of person she wants to be. Soon she is going to her first punk show with Lonnie. As you enter new rooms of the house, you start to find show posters, set lists and Sam’s first zine (Kicking Against The Patriarchy!) made from cut-outs of magazines and comics.

But this comes with a heavy price. At risk of spoiling everything–you should really experience the narrative for yourself–I can say that you follow Sam’s emotional journey as she experiences the highs and lows that come with figuring out who you really are.

For weeks now I keep thinking back to the things I saw in that house: the funny notes between Sam and Lonnie, the way you could tell Sam’s parents were trying to understand what their daughter was going through and ultimately how they failed her. How their own stories play out on a parallel track, culminating in the events that lead up to Sam making an important choice that will change the rest of her life, with you rooting her on as you piece it together.

In contrast to Gone Home, my teenage years were about as vanilla as you can get. Raised by middle-class parents out in suburbia who divorced while I was in high school, I had my share of angst, but it was mostly a tempest in a teapot. It was not until I was in college and learned that a person could be transgender that things started to make sense for me.

I had supportive friends who encouraged me to explore, but when I came to the conclusion that I wanted to transition to living as a woman, I started running into problems that culminated in forcing me back into the closet for years. By the time I finally did transition, I felt like I could not wait a minute longer and I was resentful for having wasted so many years not being the person I am.

But even if I had been born a girl I would have missed out on Riot Grrrl anyway. In 1993 I was only nine years old. And growing up I never had any guiding cultural influences, no cool aunt or friend’s older sister to give me mixtapes and hand-me-downs. As much as I regret it now, all my music and movie recommendations came from watching countless hours of VH1 and MTV until I was well into college.

I like to lie and tell people I did not discover music until 2005.

So even if I had been a girl, I still would only have read about Riot Grrrl in a Rolling Stone retrospective many years too late. My version of Revolution Girl Style Now was asking my dad to drive me to Best Buy so I could buy the Spice Girls’ first album.

Despite all that, I figured it all out eventually. Through the internet I have been able to find people who think and speak the same way I do about the things that matter to me, I have made friends I am able to confide in, in ways I did not think possible, and I have had the experience of counting down the days until my favorite band came to town before finding myself standing in the front row screaming along every word. In a way, Titus Andronicus is my Bikini Kill and Waxahatchee is my Bratmobile.

Reading Girls to the Front made me regret that I did not get to participate in the Riot Grrrl movement, but playing Gone Home both gave me a real sense of what it was like and reminded me that my experiences are just as valuable. It did this by not just telling me about what happened from a historical perspective, but by giving me a proxy and letting me connect the emotional dots for myself.

Even though the details were different and I came to it many years later, I was Sam, and Gone Home was my story too. I am just so happy they reminded me. 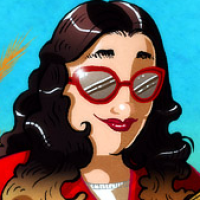 Alice Lee can now rock a leather jacket, ripped black tights and combat boots with the best of them. She writes things at The Yearbook Office and talks about video games on her podcast Girlfriend Mode.