A note on The Toast

This is not a joke. Hillary’s team had talked to me a few weeks back about doing something, but I didn’t want to do, like, a “If Hillary Were Your President” type thing, and then they got in touch on Wednesday and said she wanted to write something HERSELF (it seems her people show her Two Monks or what-have-you on long campaign days) and I said only if it was funny and they said “she was thinking more heartfelt?” and here we are. – Nicole Cliffe

I know that today is the final day of The Toast, and I wanted to take a moment to reflect on what this space — and spaces like it — mean for women.

In nearly every industry, from publishing to scientific research, women have had to forge their own paths against overwhelming odds and less-than-friendly welcomes. When I arrived in the Senate in 2001, I was one of just 13 women, and I remember how thankful I was for my female colleagues on both sides of the aisle. My friend Barbara Mikulski famously started a tradition of dinner parties for all the women of the Senate. Over a glass of wine — okay, maybe three — we’d give each other support, advice, and highly relevant tips to navigate being in such an extreme minority.

I’ve always had great admiration for women like Barb who take it upon themselves to create spaces where women can speak their minds freely. With this site, Mallory, Nicole and Nikki did the same for so many women — and they made us laugh and think along the way.

I’m looking forward to seeing what they — and the many great writers who’ve contributed to The Toast — do next. (At least two are working for my campaign!) As we look back at what this site has meant to so many of you, I hope you’ll also look forward and consider how you might make your voice heard in whatever arenas matter most to you. Speak your opinion more fervently in your classes if you’re a student, or at meetings in your workplace. Proudly take credit for your ideas. Have confidence in the value of your contributions. And if the space you’re in doesn’t have room for your voice, don’t be afraid to carve out a space of your own. You never know — you might just be the next Nicole Cliffe, Mallory Ortberg or Nikki Chung.

Thank you, and as my friend Barb would say — keep giving them hell. We’re counting on you. 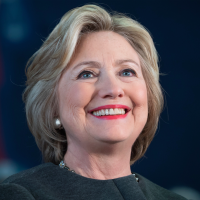 Hillary Clinton is a former First Lady, senator, and Secretary of State, and is currently running for President. She thinks your hair looks great exactly as it is.