The Ghosts of Gettysburg

Gettysburg, Pennsylvania, is a haunted town. It makes sense:  The town has 350 years of triumphs and tragedies in its past. Besides the infamous battle that ravaged the town and surrounding farmland and included one civilian death, Gettysburg was home to a stop on the Underground Railroad and an orphanage run by a woman with a penchant for torturing her charges. Northwest of the town center is my alma mater, Gettysburg College, which is frequently present on “10 Most Haunted Colleges” lists. The college was founded in 1832, and one of its buildings served as a signal corps station and hospital during the battle for both Confederate and Union soldiers. With over 180 years of history, it certainly has earned its fair share of ghost stories.

Stevens Hall, now a stately Neoclassical dorm, was erected in 1868 as a preparatory school for girls. In the 1870s, a few girls from the school befriended a boy from town. One day, in the dead of winter, the boy escaped his abusive home (ostensibly, the aforementioned orphanage) and found refuge in the girls’ room on the second floor. That snowy night, the headmistress came around to the rooms to check on the girls before bed. As she approached the room with the boy, the girls hurriedly hid the boy on the ledge outside their window. The headmistress took her time talking to the young women, and she did not leave the room until nearly an hour later. The girls threw the window open to look for the boy, but all that was left were small footprints in the snow on the ledge. They ran outside to see if he had fallen, but the boy was nowhere to be found. To this day, sightings of a boy in the window, blue in the face as if frozen, are common among female residents of Stevens Hall.

While chilling, this story is not true. I don’t mean “not true” in the “ghosts don’t exist” way. I mean “not true” in the “this story was made up in a creative writing class at the college and was appropriated into a Ghosts of Gettysburg book by a famous paranormal author whose name rhymes with Smark Schnesbitt” way. I know. I was disappointed, too.

I am a sucker for any “Ghosts of [Enter City Name Here]” books. I collected them as a child, and I, in fact, had four of the Ghosts of Gettysburg series. As I entered my freshman year at the college, I knew the story of Blue Boy. I knew the story of the girl who jumped from the tower of Glatfelter Hall. Her lover broke their suicide pact, and now she tries to lure men up the winding stairs to push them off. I knew about the two professors who descended into the basement of Penn Hall one night to find a fully functioning Civil War hospital when the elevator doors opened. I knew about the sentry who paces the cupola of the same building. I knew about “The General,” who was always saved a seat at every performance at Brua Hall. And I was excited and determined to see or talk to someone that had seen these spirits.

Much to my chagrin, I quickly learned that many of these stories were made up by students or theater professors and had little, if any, recorded experiences to back them up. This isn’t to say that we didn’t have our share of paranormal experiences, though. Oddly, however, the majority of them happened in a freshman dorm.

“I’m pretty sure Rice Hall was some sort of portal,” my friend A said when I tried to source some stories for this piece. Indeed, the majority of occurrences seemed to happen on the second and third floors of the dorm. Late one night my friend R woke up in his room on the third floor to go to the bathroom. When he got back into bed, something was pulling on the edge of his blanket near his knee. “I said, ‘Go away!’ out loud, and it stopped,” he told me, but he could never shake the uneasiness he felt at night.

V saw a man in a top hat who would appear as a reflection in her second floor window when she sat at her desk. “He’s not scary,” she would tell me. “He’s just there.” When A’s roommate was away, the spirit of a young girl would stand by my friend’s bed at night and brush her hair.

Then there was the shadow in the second floor girls’ bathroom. Occasionally, when alone in the bathroom, a shadow would pass from the mirrors across the wall into the last shower stall—gently moving the curtain as it passed. The one time I saw the shadow remains my only encounter with the paranormal.

Yet no one has ever been especially impressed or frightened by these particular stories. These spirits didn’t have tragic backstories, or even names. There was no history to scour through to discover their identities. And besides, who would want to? They didn’t pull pranks or lure men to their death. They just were.

We are drawn toward stories of ghosts who interact with their own pasts as well as our present. We like ghosts who try to avenge their deaths or continue the noble pursuits they had in life: a basement full of Civil War doctors who still struggle to save the lives of wounded soldiers, a beautiful young girl who attempts to lure college boys to their deaths, a frozen figure in a window. These stories are more exciting, to be sure. But why are we less curious about the quieter spirits?  It is, I believe, because we are afraid to face our own afterlife. It is to assuage our fears that we will not be left to the mundane tasks that we performed in life: Eternally pacing the hall, brushing our hair. 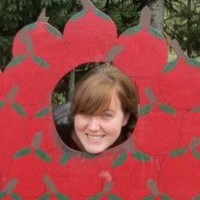 Laura Jarrett is an assistant editor living in New York. She believes in ghosts, but aliens are a bridge too far.