I Once Explained Steampunk To Sam Shepard

On a spur-of-the-moment decision to travel with a posse of graduate students, my advisor invited my friend and I to an odd think-tank-type meeting at the Santa Fe Institute. The whole weekend consisted of a series of surreal conversations in which biologists, computer scientists, and humanists (us) attempted to figure out if we actually had any kind of shared language with which to discuss digital research and quantitative methods.

In other words, a group of probably crazy people from incredibly specific, remarkably different fields tried to decide if they all mean the same thing by Big Data.

The most surreal moment, though, came as we were getting a tour of the place, which is both beautiful and lives up to every imagined expectation of what a place like “The Santa Fe Institute” should look like. Inscrutable dry-erase marker commentary written all over glass walls, lots of open-flow floor plans, “idea pods,” stark desert views.

In the midst of this, we were casually introduced to the current artist-in-residence, Sam Shepard, as well as his teenaged son, who both gave the impression of having arrived there directly from an even more remote location that probably did not have wi-fi and was possibly located about thirty years in the past. They were about to leave to go fishing for the afternoon, but first we all sat down to lunch together and set out trying to describe to each other what we do. My advisor talked about working on the history of the novel, we argued a little about what text actually qualified as the first novel, and Shepard and one of the other attendees got into a long discussion about their shared interest in collecting antique typewriters.

I really wish I could remember any of the names or details of the typewriters, but all I can recall is an undifferentiated flood of model numbers and their various desirabilities, linked to qualities like weight, noise, keyboard feel, and required maintenance.

I honestly can’t remember exactly how it happened, but it was probably sparked by the fact that I had absolutely nothing to contribute to a debate about which antique typewriters make the least noise and was feeling like I’d done a poor job of justifying my presence at this whole bizarre meeting. I think I said something about how maybe antique typewriters were now harder to find thanks to steampunk fans, and Shepard said he’d never heard of them.

The next thing I knew, I had launched into some kind of incoherent…. “It’s sort of an interest in nineteenth-century technologies, but with a fantasy bent that imagines them as capable of twenty-first-century…technologies? So, like, you get a lot of pretend time machines? [Sam Shepard’s already deeply-lined face grows increasingly concerned] Which is not actually a twenty-first-century technology haha, of course, hahaa, but also a lot of, you know, goggles and, I don’t know, airplanes, and things that are built to look like old trains and steam-powered… things… and it was sort of spurred on by novels by William Gibson? [looks desperately around the table for confirmation, which does not arrive] and it’s gotten sort of, um, popular? And, you know, maybe that’s why… typewriters are harder to find now?”

I believe he then said something along the lines of “Hmm, isn’t that interesting?” and then left to go fishing with his son. The rest of my weekend was spent mentally replaying that comment and flashing back to the performance of True West put on by several of my college friends during our sophomore year, while a medievalist and a German biologist named Manfred argued about how to define a “unit.”

Kat Weaver lives in Minneapolis with her girlfriend and two birds. Her portfolio can be found here. 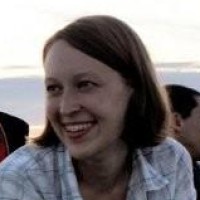 Kathryn VanArendonk watches a frightening amount of television and has no concept of life outside the academic calendar.