Holding Hope: On Being a 911 Operator

I’ve listened to a lot of people die, and take it from me, people don’t slip away quietly like they do on screen, with one last longing look and a soft sigh of disappointed resignation. There are, of course, some quiet deaths—dying in one’s sleep is something many of us hope for. But the body is built to fight, and even in the most exhausted of frames, it can kick up a racket on its way out. It’s not polite. It doesn’t ask permission. It rattles and gasps and wheezes like an accordion being run over by a tractor-trailer. It fights with the bouncer and hurls epithets over its shoulder as it’s carried out.

I’ve worked 911 for seventeen years as the first of the first responders. I’m the person who tells you how to do CPR when you see a guy drop in front of Starbucks, when no one else wants to help, when you can’t remember one single thing you learned in that class you took before you had your first kid.

I’ve heard so many people die that sometimes I can tell the person is dying before the caller does. That fish-gasp-snore sound (called agonal breathing) is the reason CPR is sometimes started too late to help.

“Oh, I can’t do that. He’s still breathing, can’t you hear that snoring? Just get here!”

But I can tell by the sound that he’s not snoring, he’s actually dying, and without immediate intervention he won’t make it. It’s up to me and only me to convince the eighty-year-old woman that she’s strong enough to pull her husband off the bed in order to get him on a flat surface (You can’t do compressions on a bed. Pull the sheet he’s lying on. Don’t worry about the fall is what I say. You can’t hurt a dead man is what I don’t say). It’s up to me to convince the seventeen-year-old girl to give mouth-to-mouth to a friend who’s overdosed, even when the caller is high as hell and doesn’t want to get anywhere near the stuff coming out of her friend’s mouth. It’s up to me to tell the mother how to cut down her son who’s hung himself with a rope made from his stepfather’s ties in case there’s still oxygen lingering in his blood. Speed. Now. The faster, the better. The more convincing I can be, the better chance the person has of being revived.

You answer the phone. You talk two hikers through giving CPR to a stranger on a hillside. Tell one how to pull the latitude and longitude off their iPhone because the call came in on the wrong line while coaching the other hiker not to stop compressions (tip: know how to find this location info on your phone). Get the helicopter ordered, help it land safely in the right place.

Finish your slice of pizza long gone cold. Fiddle with the crossword puzzle from the day before. Answer the next phone call. Don’t ask about the endings. HIPAA laws make it clear that unless you have a need to know, you have no right to know anyone else’s medical information. It can be frustrating to never know the endings. Unless you make the endings up yourself.

I started writing them down, fictional plots based on nothing but the conglomerate of grief I stored in the back of my mind—the endings I wrote to all my novels were hopeful, because hope was what I heard every day on the phones. The hope that I—that someone—could help before it was too late.

One novel’s inspiration came from talking to too many people with early-onset Alzheimer’s—they always know something’s wrong, but they can’t quite tell me what it might be. Sometimes they can’t remember their names or why they called 911. But they always hope I’ll be able to help. With something.

Another novel, The Ones Who Matter Most, was the result of listening to hundreds of women over the years entering miscarriage. “No, no, no, no. Not this, no.” The liturgy these women chant is millennia old. Don’t sit on the toilet, I tell them. Don’t cross your legs. They cling to my words, hoping that if they do what I say, they can change the ending.

Hope. I hold out hope.

Because without hope, we don’t go on. Hope is the only thing that lets us say goodbye to our loved ones in the mornings—the hope we’ll come back together later, safely.

Hope is the thing our brains hold without us having to try. Our bodies, even at the edge of death, still hope for oxygen, still try to grab at it. Hope is extravagant and senseless and often just plain ridiculous, and yet still it rises.

Once I took a call for a 103-year-old woman who stopped breathing while at a family birthday party. Her great-grandson did perfect CPR—I could hear the sound her chest made as he did compressions in exactly the right rhythm. All the while, he panted and muttered, “Come on, Grandma, you can make it. Come on, Grandma. You can do this.” Behind him, the whole family cheered them both on. I was listening to a house full of hope. A home full of love.

I don’t know if Grandma made it or not. I’m guessing she didn’t, but what a gift, to be 103 years old and your family’s still not ready to let you go.

I’ve just left the day job. It’s not like it’s a spur-of-the-moment thing. I’ve been working both 911 and writing, ninety hours a week, for ten years. I’ve published three literary novels, ten feminist romances, and one memoir, and this is what I’ve been working toward. I’m as ready for this leap as I’ll ever be.

It’s been almost two months of complete self-employment and I’m still twitching from adrenaline withdrawal, but not having to wear a pager to go to the bathroom is great. Actually sleeping at night—every night—is even better. So even though my hopeful dispatch manager has put me on the part-time roster just in case I feel like picking up some shifts, I think I’ve made the right choice in taking off my headset for good.

I spent seventeen years listening to what can go wrong, hearing stories of predictable losses and freak accidents. I had the two best jobs in the world: giving immediate, life-saving assistance, and then making up stories about what happened next (in all cases fictionalizing the stories completely to protect those affected, including in this essay). I knew that sometimes, while on 911, I helped someone save a life.

And then a couple of readers wrote to me, saying I’d saved their lives. That’s exactly as untrue as it would be if I took credit for actually restarting someone’s heart over the phone. In not one single case did I put my hands on a chest and push. There was always someone else following my directions—they did the life-saving. In the same way, I don’t believe my writing can actually save someone.

But in both those jobs, I played the same role: to be the holder of hope. On the phone, I was the placeholder, the voice the caller clutched while waiting for an actual hand. In my books, I’m also just a voice, something to cling to while a reader’s world slips sideways. And I’m hoping like hell I get it right. From now on I’m wearing no headset and leaving behind only black marks on a white page, holding the space for hope and the shaky breath that follows it. 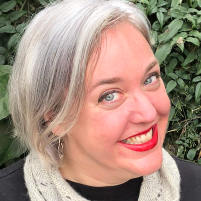 Rachael Herron is the bestselling author of thirteen novels, including The Ones Who Matter Most and Splinters of Light (Penguin). A half-New Zealander-half-American, she holds an MFA from Mills College.