There’s No I In Tina Fey

At a part-time museum job I had in Hyde Park, I cut out a photo from the Chicago Tribune’s daily of Tina Fey and her husband Jeff and thumbtacked it next to Tina Turner and Minnie Mouse on our breakroom wall. Everyone I knew in Chicago loved Tina and some of us pretended she was our friend. The caption under the photo said that she and Jeff went to our museum on their first date. I took pride in that fact. I may have only worked in the museum’s movie theater, where I told field-trip kids to turn off their cellphones, but my employer helped Tina find love.

This first date had happened long before I started working at the museum, but still, I took some of the credit.

Unlike Tina, though, I was not happily married or happily dating or even happily single. My boyfriend and I had been broken up for about six months when I decided I was in a funk and needed to shock my system. Some of my coworkers were taking classes at Second City – where Tina, Stephen Colbert, and Steve Carell had spent time back in the day – and I decided to sign up for Comedy Writing. This was one of those sounded-good-at-three-in-the-morning ideas, because there was a slight problem: I wasn’t funny.

“You are the un-funniest person I have ever known,” my boyfriend had said to me. He said this before or after we broke up that year; relationship timelines always get blurred. When I asked him why he thought I was “un-funny” he said, “You just are.” He also told me that he never said “un-funny,” because that wasn’t an in-the-dictionary word. I swore up and down I heard “un-funny,” though. Anyway, as much as this is because of him, it’s is not about him. It’s about me. Me and Tina.

Throughout my life I was never considered the “funny” one in a friend group – I was probably either the “crazy” or “intense” one. No matter which “one” I was, I had already signed up for the writing classes, and I was too broke (see: museum job) to back out. And like Liz Lemon says, “I don’t care. I’ll start my own group. Rejection from society is what created the X-Men!”

Perpetually late to things that make me nervous, I stepped off the Brown Line’s Sedgwick platform in Old Town about five minutes after my first class started.

I walked into the shiny building and passed a poster with Tina’s “Rules for Improvisation” hanging on a wall near the concession stand on the De Matt Theater level of Second City. These rules came from her book, Bossypants, which I got as a Christmas present and read during the tundra season. Laughter didn’t keep me from freezing that winter, but Bossypants did ease the pain.

Tina developed her improv rules while studying comedy at Second City, and, to me, they doubled as life lessons. Her rules included: Agree (rude or combative scene partners weren’t fun to play with), Yes, And (the most touted improv rule that basically means go with the other players and add something to the scene), and Make Statements (questions moved the scene forward). While these simple statements were useful and made a hell of a lot of sense, my favorite life-improv-lesson was Rule #4: “There Are No Mistakes…Only Opportunities.” I’d wager that anyone who thinks writing comedy is easy has never tried it. When I started, I questioned everything I knew like I thought that was funny and no one else did so I must be crazy.

I’ve never been one for motivational posters. A picture of a cat gripping a couch for its life with “Keep On” scrawled above it did not inspire me. It made me sad.

And want to adopt a cat.

That day when I sat in Comedy Writing, I felt like a reject-poster cat. In the fifteen minutes of class time I had missed, the other students became best friends, bonding over a mutual hatred for tardy classmates.

Our instructor talked about the class schedule – learning scene structure, joke telling, and writing sketches. He was a short man with shoulders like a semi-professional football player. He had bouncy-ball eyes and looked funny. Not, look-at-that-freak-show funny, but can-tell-a-joke funny, and this made me hate him. He told us to get into pairs and interview each other. My electric-blue best friend chose a partner other than me. We were already in our first fight. A big guy wearing bifocals sat alone, the only other partnerless person, so we got together.

My interview partner started talking to me about his life and what else I can’t remember because all I could think was this guy is just neck, like seriously he has no chin and that’s fine but I wonder how he shaves in the mornings. He finished neck-talking and started grilling me about my comedy tastes. The whole time he asked me about comedy things he kept changing his voice into different Muppet characters.

“So, what’s Tyler’s favorite comedy?” the instructor asked my Muppet partner. Upon hearing my name, I snapped into survival mode. We were supposed to let our partners tell the class what they had “learned” about us, but I am way too Capricorn for that.

“Well,” I said, “try not to judge me for this, but I really like Mean Girls.”

The room lacked Lindsay Lohan fans. Other people said movie favorites that sounded like they were highly regarded in comedy circles, because I didn’t recognize them.

The level of social terror I felt after my Mean Girls response ranked second on my list of all-time anxious moments. The highest rank came from the day my middle-school classmates laughed at me for participating in a spelling bee. Sitting in this comedy school, where people were supposed to laugh, I heard silence.

I considered that maybe the ex-boyfriend had been right all along. The Guinness Book of World Records un-funniest person. Submit my name. The thought of grabbing my bag and leaving flashed through my head.

But instead, I tightened my fists.

The museum didn’t pay me enough to spend something like $310 for one class.

“I love that movie, too,” my electric-blue blue jeans friend said.

In this sentence of solidarity, she regained my undying friendship. The instructor’s face turned rosy like a wine-drunk. In less than three seconds his expressions went through the five stages of grief: denial, anger, bargaining, depression, and acceptance.

“Don’t ever be ashamed to admit that,” he said. “That is a great movie, and Tina used to walk through these very halls.”

The rest of the class started saying how they just loved the movie as well. Someone said something about how well-written it was for a teen comedy. Whatever, you guys hated it, I thought. But, I couldn’t focus on Mean Girl haters when I just heard the casual namedrop of Tina Fey.

The instructor called her “Tina.” One word,i do like he knew her! When talking about celebrities (exceptions: Cher, Madonna, et al) or people you barely know (exceptions: that guy, what’s-her-face), common etiquette dictates the use of first and last names. Example: Instead of saying, “Remember that time Tom jumped on the couch,” I would say, “Remember that time Tom Cruise jumped on the couch.” In the first sentence it could be any Tom – that crazy coworker of yours or hot stepbrother; in the second, it’s the one-and-only king of Scientology.

The instructor moved on to the person sitting next to me, but I knew the twinkle in his eye was reserved for me.

I mean, “Tina,” as I later referred to her in my daydream fantasies and perpetuity and all essays I ever wrote with her in them.

“Tina used to sit in this same chair as me,” I’d casually drop in conversation even though I had no idea of the statement’s truth.

The teacher went on talking about something that wasn’t Tina (at which point I stopped listening), and I couldn’t help but laugh at myself. Surrounded by funny people and my just-over-our-first-fight new best friend, I started to realize what Tina’s Rule #4 – “There Are No Mistakes…Only Opportunities” – really meant. Maybe certain people (who shall remain nameless) would always think of me as un-funny. I had a zero-times-zero chance of leaving a peed-in jar in an SNL office like Tina wrote in Bossypants that some male SNL writers had a tendency to do. Maybe I’d be the only one to ever laugh at my jokes. But why should that stop me from saying them?

Tina worked at SNL for nine years and never had a big, recurring character like some of the other cast members. Sure, Tina had her Sarah Palin impersonation after she returned as a guest, but recurring characters are usually a cast member’s bread-and-butter. When Tina hosted SNL this season, she said, “I didn’t have any characters. I never did. Just, pleasant.”

No big characters and she did all right for herself.

I think I’ll be all right too. Well, as long as I stop motivational poster cat-scratching the couch and get in the scene. Oh, and work on my final punch line. 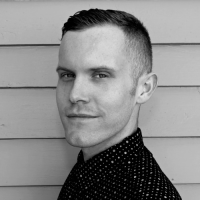 Tyler Gillespie is an MFA nonfiction candidate at the University of New Orleans. The Awkward Phase, a Tumblr he co-runs, was a finalist in the Chronicle Books “Great Tumblr Book Search.” He tweets here.