The Place You’d Never Know Was There: Stripping in Tokyo

It’s a late summer night in Tokyo. On the streets of the Roppongi entertainment district, a man named Lucky is stopping groups of businessmen on the street and trying to hustle them into a strip club called Glamour.

A tiny club the size of someone’s bedroom located on the penultimate floor of a building just off Roppongi’s main drag, you would only know about Glamour if you happened to work there or had been coaxed inside by one of the club’s touts, like Lucky.

Touts, or flyers as they were known, were a common addition to the staff of Tokyo’s strip clubs, and ubiquitous on the streets of nighttime Roppongi. They would follow pitch, harass, and cajole any male passerby into whichever club he worked for, usually describing it in terms more generous than deserved.

Glamour’s touts, however, were critical to the club’s operation. They were the only means by which a customer could enter, because the club’s door – and often, the elevator to our seventh floor location – was locked. It had to be, because Glamour had no license and most of the girls no work permits; we couldn’t just let anyone walk in off the street.

Our seventh floor location afforded our touts (who worked on commission) some room for manipulation. Our building also housed a large, well-known, Western-style, “classy” strip club called 7th Heaven. Potential customers would naïvely ask the flyers to take them to 7th Heaven and the flyers, almost always West African men, would respond in the affirmative, then drag them up to our seventh-floor hole. The strippers of 7th Heaven were thoroughbreds, professionals; we were scruffy, unmotivated.

The flyers worked as a team. As one was hauling some poor soul into the elevator, another would call the club on his cell so that Mama, a Cameroonian woman also known as Traci, could unlock the door, turn on the lights, crank up the well-worn hip-hop CD and wake up the girls before the elevator doors heaved open to reveal our flyer with customer in tow.

At this point we all lined up in the hallway with a welcoming cry of Irrashiamasse! Here things could go one of two ways: either the customer would be drunk or game enough to advance into the tiny club area, take a seat and accept a proffered hot towel, or he would look at us, at the club, Mama bearing down on him, and recoil in fear, disappointment, or shock. In this situation we would employ various tactics to try to convince him to stay: guarantees of the fun he was certain to have, assurances that he could choose any girl he wanted, tempting him with free drinks, but I always had the misplaced stubbornness of someone who thought herself too proud to beg. Besides, the nervous ones usually turned out to be trouble.

Lucky’s customer that night didn’t even give us a chance. He walked in, took one look at us and said: “Is this all you’ve got?”

In a second he was out of the door. Lucky got pissed, believing that Julia had lost him a sure sale, and everyone went back to sleep.

I took my drink into the small private room, a closet-sized space with an armchair and tacked-up naked lady poster. I let my heels fall to the floor, laid back on the chair and looked out of the window into the late summer night sky. Typhoon season was beginning and the spots of rain on the window blurred the streets’ neon lights. What usually resembled the bright colored lines of the Tokyo subway map now blurred together into a wet pulp, the map rendered unreadable. I looked toward the wet neon blur of Roppongi’s streets. Down below, as if it were a body of water of unknown depths concealed by a thin sheet of ice, lay the water trade. I had long been treading along its surface, careful not to slip but hoping to fall through.

Mizu shobai, or the “water trade,” is a euphemism for the nighttime entertainment business in Japan. There are several, unproven explanations for the term’s origin — the industry’s impermanence, is one; the association of water with pleasure another.

Roppongi mostly existed for the water trade; you only went there to work in it or to consume it. And Roppongi was unforgiving in either case. If you were just there to work and were smart about it, you learned the game quickly and left after your tourist visa was up. You were supposed to get in and get out: a straight sprint from the arrival hall at Narita Airport to departure three months later on a flight somewhere else with a purse full of cash. If you lingered, you would start to slip. Come back and renew your visa for another three months and it would start to seem normal, and that’s what would send you into the water trade. I dawdled. I hadn’t meant to stay, but something had distracted me. I was 26 now and had first arrived at the age of 19.

At first, I fancied myself as some kind of pioneer. As if I had unlocked the secret way to bypass all of life’s inanities and head straight for the money. In the early mornings I would strut around with a smirk and a pocket full of cash, walking in the opposite direction of what I called “the drones” rushing to their offices, while I was returning home from the club.

In the end, though, I wasn’t so different from the office workers. I was, after all, working a 9-5 gig, too. It’s just that my hours were in the dark.

For every night of unhinged, cash-rich customers; of nights when I’d laugh, drink, and party, incredulous that this was my job, there would be a least two of utter boredom: the nights we’d all lie stretched out like sullen cats on the couches, telling each other to wake the other up when a customer came in. But there would be no customers. I’d just lie there, under the dim lights, looking up at the speckled silver of the mirror ball float across the ceiling, getting more and more pissed off and, the longer the days stretched out from a last good night, getting more desperate.

On good nights I could forget about it all because, while I was making money, it seemed like nothing else in the world mattered; that I would just keep doing this forever, and that would be OK. On bad nights, the fear and doubt, and the following three words would set in: Is this it?

It was difficult to think that this might really be it. That all there was to look forward to was getting older in this second-rate club, watching the hours tick by as I waited for someone to show up who might be willing to pay to see me take my top off. It was too much to deal with, so on those nights we would all tell each other our plans; reassuring ourselves that this was just a stepping-stone on our way to something else.

Most of us had earmarked the money we expected to make for further ventures: some for more traveling, some for college degrees, some for real estate, and some for the families left back home. Most of us accepted that this was something we were going through on the road to some higher purpose. Except Stinne.

Stinne seemed to genuinely think that she was too good for all this. She liked to remind us that she was what she called “an educated actress,” and hinted vaguely about being famous back home in Copenhagen. It was her way of raining on everyone’s parade.

The week before, I’d had a profitable night with some Danish guys and was feeling pretty pleased about reaching my financial goal for the week. Stinne said, “Well, I’m glad they didn’t pick me. I was just in this big commercial on Danish TV. They would have recognized me and wondered what I was doing here in this club.” The not-so-subtle insinuation was that no one would question what I was doing here. I wasn’t too good for this place.

The Akon CD, which had been quietly playing as we napped, gets cranked up to full-volume. In a Pavlovian response, we all sit up straight. We know what this means, but Mama yells it out loud, anyway: Customer!

We all pat our hair into place, tug at our teeny-tiny dresses, and shuffle toward the hallway. I hear the sound of the elevator opening and Lucky making his usual pitch: “Just take a look,” he says. “If you don’t like, you leave.”

Irasshaimase! We sing in unison. Smiling, hoping that this is the one. The one that gets us one step closer to whatever it was we came here for. 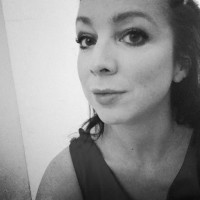