Gal Science: Get Some Sleep

As The Toast searches for its one true Gal Scientist, we will be running a ton of wonderful one-off pieces by female scientists of all shapes and sizes and fields and education levels, which we are sure you will enjoy. They’ll live here, so you can always find them. Most recently: How to Build a Galaxy and Fight an Army.

Hi, Toast! As a brief instroduction, my own research is focused in the areas of infectious disease and cancer, and using organic chemistry and enzymology to discover new drugs. Specifically, I design and synthesize molecules to inhibit enzymes that are integral for the progression of various disease states, and I love it because it lies on the interface of chemistry and biology. But I also have a great deal of excitement about other really cool, new research findings outside the area I specialize in. Stuff like sleep, and why we do it and what it means.

I would venture to guess that most of us have suffered from sleep deprivation at some point in our lives, whether mildly self-induced as a consequence of some current stressor or as part of a larger, more widespread pattern. What’s interesting about it is that pretty much everyone has the same uncomfortable experience in the lack-of-sleep situation: inability to concentrate, incompetence when it comes to decision making, forgetfulness, general non-retention of information. So why does sleep deprivation universally make us all feel like we’ve just crawled out of the primordial sludge? And why is sleep so important?

It’s an interesting question seeing as pretty much every living species on the planet Earth sleeps (well, at least all vertebrates). There’s this disease called fatal familial insomnia (FFI), in which people suffering from it are physically unable to sleep. It starts sometime in adulthood when they begin to experience progressively worsening insomnia, which persists throughout the course of the disease. They suffer from panic attacks, paranoia, etc. Then, after about four months of insomnia, they start hallucinating. This lasts for about five months until they lose a ton of weight, disintegrate into dementia, become unresponsive to environmental stimuli and die. In one instance, doctors tried to alleviate the symptoms of an FFI sufferer by using sedatives to induce a coma, but even this was unsuccessful. These people simply cannot sleep. You know what causes this disease? Misfolded proteins in the FFI sufferer’s brain. The same type of thing that causes mad cow disease. But I digress…the point is that sleep is crucial. Crucial enough that lack of it will kill you. So crucial that hibernating bears wake up from hibernation to sleep. So what is the science behind sleep? What is this crazy phenomenon where we lie dormant, in dark places, snoring and drooling and mumbling without any outward semblance of self-awareness?

It’s generally pretty well accepted that the purpose of sleep is to allow for the rejuvenation of various systems in the body (immune, nervous, etc.). For instance, rats that have suffered skin burns have a retarded rate of healing when sleep deprived. Sleep is also intimately related to memory and brain function. But that is only part of the story and our understanding of the subject is incomplete at best.

An article published recently in Science by a team of researchers from the Center for Translational Neuromedicine at the University of Rochester Medical Center illuminates one of the crucial functions of sleep (DOI: 10.1126/science.1241224.) From their research, Xie and coworkers have concluded that during sleep, the toxic products of brain metabolism (yes, our brains create waste just like the other organs in our bodies) are evacuated from the interstitial (in-between) space among brain cells. Here’s the thing: our brains do not have a lymphatic system (a system that transports stuff that needs to get moved.) So this interstitial space among brain cells serves the purpose of a lymphatic system in the brain – removing toxic metabolites produced by normal brain functioning. The interstitial space holds the brain waste until it is washed away by the flow of cerebrospinal fluid (CSF), which is filtered out of the blood and pumped into the brain. After percolating around the brain a bit, the flow of CSF (and the waste products it picks up) is eventually pumped back out into the blood stream around the brain, where it can ultimately be removed from the body by other means. Now, how does sleep affect this?

So usually, this interstitial space occupies about 14% of the total volume of the brain. Xie and researchers monitored both anesthetized and naturally sleeping mice and found that the interstitial space increases by over 60% to occupy 23% of the total volume of the brain when the mice were in both the anesthetized and sleeping states. This allows for an increase in the flow of the CSF and the toxic brain metabolites transported by it. These researchers found that when the mice were awake, the CSF flow was limited only to the surface of their brains – occluding the transport of toxic metabolites from deeper in the brain tissues. While in the waking state, the CSF flow was limited to just 5% of the flow found when the brain was in a sleep state. When the mice were asleep, the interstitial space was found to expand, allowing the CSF to flow into the deeper tissues of the brain and more effectively carry away harmful products of brain metabolism.

Bottom line: the increased flow of CSF through the interstitial space during sleep allows for the more effective removal of toxic brain metabolites. One of those toxic metabolites is a peptide known as β-amyloid (Aβ). This peptide is intimately related to the progression of Alzheimer’s disease (it forms plaques in the brain). Xie and researchers put radiolabeled Aβ (basically put a tag on it so they could monitor its whereabouts in the brain) and found that when the mice were sleeping, the radiolabeled Aβ was evacuated from the brain two times faster than when the mice were awake.

These findings by Xie and coworkers shed some light on the symptoms experienced by sufferers of FFI, right? Because of their inability to sleep, the toxic waste products of brain metabolism build up in the interstitial space of their brains, and they experience panic attacks, paranoia, hallucinations, and eventually dementia and death.

So here’s the proposal for the purpose of sleep: during the day, the brain accumulates toxic metabolites in the interstitial space. When the accumulation of these metabolites hits some concentration, we start to feel tired. The accumulation of metabolic waste flips a switch in our brains, indicating that we need to go to sleep so they waste can be more effectively cleared from our brains. The result is the cycle of wake and sleep states that we all experience. So get some sleep – it’s a beautiful thing. 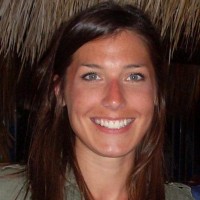 When she's not doing sciencey things, Sarah St. John enjoys slow running, eating greasy food, and backpacking through the mountains. Currently, she lives in Indiana with her partner Chris and their two dogs Marin and Melvin St. John-Clark.