Gal Science: Why We Study

As The Toast searches for its one true Gal Scientist, we will be running a ton of wonderful one-off pieces by female scientists of all shapes and sizes and fields and education levels, which we are sure you will enjoy. They’ll live here, so you can always find them. Most recently: Get Some Sleep.

Many times in my life, beginning very early but increasing exponentially after I became a psychology major in college, I have declared that some topic—most likely relating to human cognition, atypical development, social interaction, or our vast, tricky brains—is “fascinating.” You have probably done it too. You have to say it a certain way, with breathiness and an extra little oomph on the first syllable. You can do it in class, at a dinner party, while you’re watching a TEDx talk somebody shared on your newsfeed, anywhere! Try it with me: “I just find that FASCinating!”

In my experience, researchers choose their research topics for a few reasons. Sometimes that is the lab that we sort of fell into as an undergrad, and then, seven years later, we retroactively classify our accidental path as our “program of research.” Sometimes we really, truly want to help people, or fight a social injustice. I am not selfless enough to claim that this is my primary or only goal, though I have become competent at making arguments about the implications of my research for national health, since that is the way we get money to study the weird thing which obsesses and frustrates us, mildly holds our interest, or fervently holds our advisor’s interest. Sometimes we pick a topic because we find it—are you ready?—FASCinating!

What would you have picked? I chose to study how teenagers grow up on the Internet, because I grew up on the Internet (that is the final reason for choosing a topic: as we like to say, “Research is ME-search!” We are often insufferable.) I also, almost entirely unrelatedly, chose to study brain activity during social cognition, because I was seduced by the bright, shiny blobs on the perfect grey brains in all of those CNN, Newsweek, and Huffington Post articles. An aside: you know brains don’t really light up like a Christmas tree, right? I’m still working on perfecting my retroactive program of research. Turns out it is well-nigh impossible to Facebook during a brain scan, but fortunately teenagers are now totally over Facebook, so there may be a bright, shiny blob of light at the end of the tunnel. Mostly, my days consist of interviewing teenagers, poring over social media accounts and dissecting the subtleties of a carefully-placed emoji, feeling like a boss when I finish a scan and email a kid a picture of her brain, and getting haltingly, incrementally better at writing scripts to analyze my growing pile of data. My friends are somehow just as happy as they invent new words and new toys to study language development, analyze the electricity consumption habits of our city, and use a lovable one-eyed dog to scare the living daylights out of rats in order to better understand PTSD.

Here are all of the other FASCinating topics I thought I would study while an undergraduate at a school that was basically academic summer camp: Sleep paralysis. Ape language. Oxytocin. The very nature of consciousness itself. Schizophrenia. Maybe you wanted to study the brains of serial killers, sexual fetishes, and whatever is behind the trippy art people make on LSD.

It takes a few years to discover that:

1) Sometimes, all of the cool stuff has already been done and a couple evenings of drunk Wikipedia rabbit-holing will yield the same amount of pleasure as an entire career devoted to that subject.

2) Our research pipe-dreams do often reveal something about ourselves, but more often they reveal our ignorance or insensitivity. My friend actually researches schizophrenia. The other day, in the process of piloting a study on me, she explained that decrements in premorbid IQ often predict the onset of schizophrenia. I was ashamed that, as a student of psychology (not of clinical psychology, but nonetheless), I assumed that individuals with schizophrenia were, if not of average intelligence, then certainly A Beautiful Mind-style geniuses. Doesn’t that seem so much sexier? It is so easy to think of mental atypicality as FASCinating in the abstract, to be taken in by media portrayals of autism or psychopathy or amnesia. Sexy young asylum inmates in movies rarely suffer from tardive dyskinesia.[1. This is not to say that a diagnosis from the DSM means one will lead a sadder or lesser life; only that one does lead a life, not a television series.]

Psychologists by their very job description study humans the way that biologists (or… other psychologists) study finches or rodents or primates. We watch your behavior, note your responses, subject you to electric shock or gruesome imagery or viruses, and then we turn you into data. Here’s a confession: sometimes we think it is kind of funny that we get to do those things, and sometimes bragging about them is a great way to make friends with hot bartenders.  I do believe that most of us feel in our hearts that the temporary discomfort we have caused you was worth the knowledge afforded to society, plus twenty bucks in cash. But this doesn’t stop me from occasionally pretending to be the sexy neuroscientist in a superhero movie.

Plus, whatever we each believe, there are checks and balances. These days, every school has an institutional review board, or IRB, that prevents us from doing anything particularly egregious, like locking people in a pretend prison in the basement of Stanford, only stopping that experiment because our graduate student begs us to so do, marrying said grad student, and then laughing uncannily about it in documentaries years later. Oh, wait, haha, never mind…did you know that the Stanford Prison Experiment was approved by the university’s Human Subjects Review Board?

It is worth noting a few things about that particular example—first, I can assure you that our IRB applications are now much longer and more detailed, and I have to have confidence that the process has been refined over the past forty years. Second: any of you who have taken an introductory psychology class probably know all about the Stanford Prison Experiment—and the oft-cited Milgram experiments—because for all their flaws and ethical questionability, they taught us something important: just like the Ancient Romans and the Nazis, Americans have not managed to rise above our horrifying human nature. So maybe the mental anguish of a few long-haired college boys wasn’t all in vain (and yet…knowing the results of these experiments hasn’t stopped Americans in positions of power from continuing to do repulsive, unspeakable things.)

Ultimately, I think Zimbardo and Milgram’s work continues to show up in textbooks not because they teach us so much about human social behavior, but because they teach potential researchers that we are going to have to grapple with ethical questions from the very beginning. Maybe I study selfies and reblogs and #yolo because you—and  your younger sisters and your nephews—make it easy for me.  You leave little nuggets of information online for me to pick up and quantify. Have you ever asked a teenager to explain the appeal of Instagram? You don’t need to apply a shock; honestly, you don’t even need a monetary incentive. But I’m happy to come down off of my high horse, because I wouldn’t have my nice developmental theories if generations of scientists hadn’t switched baby mice at birth and sewn shut the eyes of kittens (yup. Sorry.)

As I was writing this essay, I received an email alerting me that animal rights protestors would be gathering outside our brain imaging center in a few days. The animal rights parade makes an appearance roughly 2-3 times a year; they are derided by some and ignored by most. Attached to the email was a graphic which I suppose came from the organization; in the interest of full disclosure, I don’t know the actual source, but it seems unlikely that our administrator decided to do a quick Google Image Search and attach an illustrative pic for funsies. The graphic reads: “One struggle, one fight: Emancipation, Civil Rights, Women’s Rights, Animals Rights.” The first three items have a check mark next to them. Three down, one to go.

I raged for a bit, and then posted it on Facebook (because I express my emotions most effectively with the assistance of social media). I said, “I’m glad that they got that Women’s Rights/ Civil Rights thing all figured out and put to rest so that they can focus on more important things, like wearing costumes and putting an end to cancer research.”

See, the thing is, though, while plenty of people on the medical campus are doing cancer research, fewer psychologists are doing so—some are, more than you might expect, but many of us are not. So while mice and monkeys and dogs are dying to save lives, some of them are dying so that we have a better understanding of the development of perception, or parental attachment, or other more “basic” goals. And as someone doing developmental research I am complicit.  And that is okay with me—I believe that animal research doesn’t have to lead directly to the discovery of a cure for a fatal disease in order for it to be important and good. I don’t think, however, that I have the stomach to anesthetize living creatures in a bell jar and then give them brain lesions. Does that make me a hypocrite? Maybe so. (Note: Whatever your views on animals research, putting it on the laundry list after a series of human rights that are so NOT “checked off” is really, deeply not okay.)

In some of my projects, I work solo—I troll the Internet, spy on teenagers’ public identities, and gather data without doing harm to anyone or anything other than my search history, which is creepier than ever (You should see the fun hashtags I come up with to find examples of online adolescent risk-taking behavior #420 #sexy #party #shotshotshotshotshotsEVERYBODY). When I do collect data from real live actual teenagers or college students, I like to think that their experience is, if not fun, then at least more profitable and perhaps more interesting than standing at a cash register for three hours. It’s easy for me to care about these kids, because I’ve seen their online lives and I know what dumb but oh-so-typical decisions they are making on the weekends. And there is a danger in that—in being too FASCinated—as well. I’m still doing science, and ultimately what I need is good, unbiased data. Just because one participants’ photo log of her last two years of high school is as compelling as the first season of Pretty Little Liars doesn’t mean her neural data is supporting my hypothesis.

A brilliant professor at my school uses fMRI to detect awareness in patients who are in a vegetative state and were previously thought to have no conscious thought. He can use these brain scans to ask patients yes or no questions (the “blink once for yes, twice for no” of people who can’t even blink). It is incredible science, and it has the power to do so much good. God help me, it is still so, so fascinating. 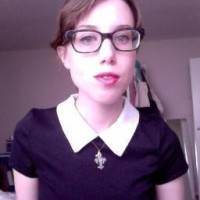 Lauren Sherman is a doctoral student in developmental psychology. She studies adolescent social and neural development, particularly in the context of digital media. She also sings opera, reads genre fiction, and tweets.