Eat Me: Can S/he Make a Cherry Pie?

Previous installments of Jessica Valenti’s “Eat Me” column can be found here. Most recently: Sunday Sauce.

I grew up in a house in Long Island City, Queens that my great-grandparents bought almost 100 years ago. There was an apartment upstairs and over the years the downstairs was a paint store, my grandfather’s butcher shop, and a candy store that turned out to be a front for a fraud and hijacking ring. (My parents got wise when they found the house surrounded by armed FBI agents. Their phones were tapped for about three months afterwards.) After my sister was born my parents took over both floors, knocked down all the walls and called it a loft.

Despite its name, Long Island City is not a part of Long Island (hmph) – but is the area of Queens closest to Manhattan, right over the 59th street/Queensboro bridge. Before LIC was condos and 20-somethings dancing at Warm Up, it was factories that everyone knew were sweatshops and sex workers lined the blocks as soon as it hit 6pm. Most mornings, my mom put on gloves and picked up used condoms thrown from car windows in front of our house and into our yard. Our ‘yard’, really – 250 square feet of uneven concrete. It doubled as a parking space after my parents poured cement on the curb to make a ramp and built swinging gates to open it up the street – a not so legal move to stop our car tires from being stolen and the windows smashed.

There was a lone space of dirt at the cracked intersections of concrete. When I was a toddler, my parents planted a cherry tree there that grew bigger than they ever expected. Its branches reached over the gate so fully that people walking by could pluck off cherries without breaking their stride. My sister and I would watch for the cherries – the greening of the branches, then the white flowers, then the fruit – and fought over who would climb highest on the ladder to pick the “best” ones.

The tree started producing more cherries than my parents knew what to do with – one or two hundred pounds a year – so my father filled brown paper lunch bags and gave cherries out to neighbors, shop owners, or anyone who stopped to look at the tree.

My parents met a block from what would become my house, yard and tree when my mom was 12 and my dad was 15. They got married five years later. They leave a lot out when they talk about their childhood, but the violence comes out in dribs and drabs. I heard rumors of my father throwing a man through the window of a bowling alley for beating up his younger brother. Of my mother hiding from her drunk father and handsy uncles. Of shoplifting (my mom) and of being beaten near to death by a group of boys from a rival neighborhood (my dad). Of why you shouldn’t trust cops. My cousin told me once about my father catching a thief in our house and chasing him down the block with a hammer.

My parents loved our house, but they did not want me to go to school near there. I tested into a magnet junior high in Manhattan and started taking the subway to it when I was 11. First my parents walked me to the station – 39th BeBe Avenue on the N line – but later let me walk the three blocks by myself. When I was 12, a man masturbated in front of me on the train platform. Despite warnings from my parents about what to do in such a situation, I froze in place when it happened. He finally stopped when a train pulled in. I tapped a man in a suit coming off the train and asked for help but he didn’t stop moving. So I waited for the next train, figuring I should get to school – but got off one stop later at Queens Plaza when I couldn’t stop shaking.

Every day after that, my father walked me up to platform to wait for the train. The booth worker let him through the gate without paying after my dad explained what had happened. He gave him a bag of cherries every week as a thank you. Waiting for the train one day, I noticed an odd shape under my father’s jacket. He tried to distract me with a joke but when I asked him about it a second time he pulled up his shirt to show me the metal pipe that was sticking out the top of his pants. He assured me that no cop would ever arrest him for beating up a man who flashes children. Today he tells me he knows that was a lie, but he had to bring the pipe with him anyway.

A few years ago my parents realized they couldn’t afford to stay in our house, but that young hip families would pay a lot of rent to live there. Around the same time, the tree started to die – disease crawling up the trunk, resulting in fewer and fewer cherries. They didn’t tell me when they chopped it down – I saw the hacked stump when I dropped by one day to peek over the fence to see what the house looked like without us in it.

Towards the end of the tree’s cherry season, when we had exhausted our paper bag supply and the yard was splattered with red streaks and browning fruit carcasses, I would gather up the cherries we had left and make pie with my mother. The pie kept for about as long as it took to get the red stains off of our fingers. A few days.

Pies always seemed intimidating to me as an adult, but the truth is that they’re fairly easy to make if you can get the dough right. To make the crust, mix 2 sticks of butter, 2 1/4 cups of flour and a dash of salt in a food processor until it’s crumbly. Add either a tablespoon of sour cream or a 1/4 cup of ice water then run in the processor until the dough makes a ball.

Cut the ball in half – roll one out on wax paper to put in the bottom of your pie dish (the other ball should be rolled out too; you’ll use that as the top).

The inside of the cherry pie is as easy as…well, you know. Get about 4 pounds of sour or sweet cherries. (I prefer sweet.) Pit them, and mix with a cup of sugar and 1/4 cup of cornstarch. Add the mixture to the crust in the pie dish, add the top. You can decorate with holes, cut-outs, etc – I just like to let it be. Brush the top with a mixture of water and sugar.

Bake at 375 degrees until the top starts to brown and bubble – usually about 40 to 50 minutes. 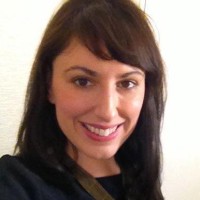