On The Bisexual: Their Care and Feeding

Good day, mythical creature aficionados. I am Miss Lemonade from the Institute of Bisexualia (currently the only faculty). I have devoted my life to the study of these pernicious, beautiful and at once complex creatures. Since the first recorded cave painting of a bisexual at Lasceaux, we have been entranced with these beings.

Mayhap you have purchased this fact sheet (for the low price of a farthing!) because you have finally constructed your own delicious kale garden to attract these precious beings or perhaps wish to go on a bicycle safari to capture a glimpse of them. I will give you all the collected wisdom I have gleaned from not only observing them but also living among their kind.

It should be noted that contrary to popular myth, they are not actually invisible all the time. Their invisibility is believed to be an advanced form of camouflage that allows them to adapt to human social conditions. This camouflage is created by the 5th bodily humor that only bisexual bodies can produce (I have labeled this “green ice”) that allows them to disappear at will. This ability alone makes it hard to track native bisexual populations but I will assure you, there more than 6 of them living currently.

The most confusing part of my research is classifying them into a known species or even family of Animalia, potentially due to their adaptability.  Bisexuals are, after much discussion, a class of marine and freshwater mollusks with laterally compressed bodies enclosed by a shell in 2 hinged parts. This seems to lend credence to the idea that they are the offspring of humans and the Old Gods. However, new research into bisexuals shows that their numbers might include yetis and possibly cats.

Their bodies (when I have been able to study them up close) have many interesting properties as well:

Much of the actual life cycle of these woefully misunderstood beings is shrouded in mystery as many hide their important moments from the prying eyes of us humans. It has been hotly debated among those of us scientifics that study bisexuals where exactly they come from – is it natural birth or is it something else entirely more spectacular? The origin of bisexuals as a whole is believed to have happened when scientists collided two heterosexuals together at the speed of fabulous but many of the findings from this experiment were considered falsified. What we are left with are more believable theories – collapsing hearts of neutron stars, eggs or maybe crawling from mountain holes.

When a bisexual is finally birthed into the world, it contains a multitude of special talents that make it able to communicate and move away from its parents immediately, unlike many types of humans. Most are born with the ability to quote all the dialogue from the 1929 German film, Pandora’s Box as well as write in Java (though they eventually graduate to PHP.)

While a bisexual can be created, it is often not considered a full member of bisexual society until it matures. Ruling elites of bisexual seem to require a full set of paperwork and only given out a limited number of licenses from dying bisexuals to newly fledged in order to keep the true population at equilibrium.

As as a bisexual’s lifespan, they seem to be as fleeting as the half-life of a lab-created element and as endless as the stars all at once. Some even speculate that bisexuals, like Captain Jack Harkness, cannot actually die. Given the anomalies expressed by one Prudence Winthrop in Madison, Wisconsin, it is also possible that bisexuals possess cyclical rebirth not unlike phoenixes. Though unnaturally long-lived, given that some corpses that have been made available to me personally for autopsy, it is possible to kill bisexuals. If you manage to cut off a bisexual’s forehead horn or strip their bark away, they will die. This death is marked with a piercing howl. It is low and mournful and will create sonic waves that cause diarrhea and depression in un-attuned creatures.

What little we know of a bisexual’s life, we seem to know the most about their sexual proclivities. Bisexuals inhabit a variety of sexual practices that we can observe or speculate about given our data.

When a bisexual reaches sexual maturity, they often sprout a horn and sometimes gossamer wings that they will use to attract other mates. How bisexuals differ from human beings is that they will copulate and interact intimately with not only bisexuals but humans of all genders. They are one of the few types of animals we know of that will do this and on a rather frequent basis. One could presume that this means we could label their inherent sexuality but bisexuals time and again have deftly resisted categorization.

Noted physicist Erwin Schrödinger first developed his theories about quantum mechanics (As it is common knowledge that bisexuals use high-level imaginary mathematics to traverse large spans of sexual time-space) when attempting to observe the perceived sexual behavior of bisexuals – he believed that a bisexual, until observed outside of the special ultramarine disco cage he had constructed, would be both straight or gay. Swarms of bisexuals disagreed with this theory and tore Schrödinger’s beloved pet cat Muffins apart limb from limb in protest. It is now very hard to cage a bisexual due to this reason.

The only known record of bisexual copulation from humans, however, is Beowulf.

(Thanks to everyone who participated in #bisexualfacts and inspired this article.) 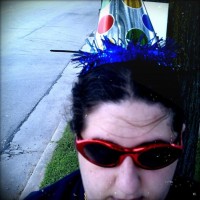 Nico Deyo is an freelance writer, artist and terrible video gamer. When she's not stirring up trouble on social media, she's analyzing feminism and social justice concepts in video gaming via her blogs Very Lemonade, Apple Cider Mage and her podcast Justice Points.