Amy Spalding is a pet enthusiast and young adult fiction author. She grew up outside of St. Louis, and now lives in Los Angeles with two cats and a dog. She and I ate brunch and discussed our mutual hatred for sad commercials featuring dogs.

Let’s get down to brass tacks. What is your dog’s name, and what breed is she?

Her name is Violet! She’s a mutt, so when I rescued her–that always sounds so dramatic. When I got her, her foster dad said she was black lab, German shepherd, and greyhound. I think of those, greyhound is the only one I believe. Maybe a little black lab? I think miniature pinscher, and maybe Basenji, especially because she doesn’t bark a lot. But recently, someone said that she looks like a giant chihuahua, and I think she does! So those are my guesses.

How old is she?

Awww.  [I don’t know why that age is cute to me.] Where is she/ what is she doing while you write?

A lot of times, I write at coffee shops because Violet is actually super distracting. When I’m home and writing, she often sits and just stares at me. And it’s really creepy, and clearly she just wants attention. It’s very irritating. Basically if I’m doing anything that involves me concentrating, she’ll just stare at me.

How did you find Violet?

I saw this adoption group at a farmers market. I emailed a guy from the group and described the dog, and so we arranged to meet up the next week at the farmers market. And as he walked up, I was like “I did not ask about that dog. I asked about a different dog. This is awkward. Do I say something?” Then I decided, “I’ll just look at this dog, and tell him later that I decided not to get a dog.” And then I met her, and she was amazing! So I got her after all.

That’s a great dog story! What if you ever ran into that other dog that you had originally asked about? Do you think it would be weird?

Ugh, it would be so awkward.

You have a dog AND cats, which is a  controversial choice. Do you hate that question “are you a dog person or a cat person?”

WHAT?! This interview is over.

I know. It’s crazy. When I was growing up, we had dogs, and I loved dogs, but I always wanted a cat. And when I got a cat, it was like my sunshine came into my life. I love cats, I love how they’re just really easy and low-maintenance. BUT I really wanted a dog, and there are so many benefits of having a dog- you can be social with a dog, you can take her places. And people know your dog. People don’t necessarily give a shit about your cats. I still feel like I’m a cat person, but I’m very close to being both.

You know, I think when you’re writing for teenagers, it makes more sense to write about people than dogs. But it it weird that my first two books, there are no pets in them at all. And I’ve always had pets- my parents got a dog on their honeymoon. So I’ve never not had a pet. I think it’s really weird that I wrote two books without pets in them.

Do your upcoming books have pets in them?

My third book does. It’s not the main character’s pet, but two of her friends have pets. One of them gets a dog in the book. And the new book I’m working on now, the girl’s family has dogs. It’s really fun writing about fictional dogs! Because you just get to name them, and describe what they’re like, but not actually have to do any work. It’s like having a fantasy football team- a fantasy pet!

Do you miss your pets when you’re away at book events?

YES! I really do. I always forget how much I take for granted that my pets are just AROUND. Like my dog sleeps in my bed, so when I’m sleeping somewhere else and there’s no dog at my feet, I’m like “oh right, that’s a really big part of my life and I miss it when I don’t have it!” I think pets are just this weird understated part of our lives.

They’re like this thing that’s halfway between living thing and inanimate object.

Exactly! It’s like “where’s my chair that loves me?”

Ink is Thicker Than Water centers on a family who runs a tattoo shop. You, yourself, have a lot of tattoos. Have you considered getting a tattoo of Violet? Or do you have one that I can’t see?!

I don’t. But I have considered it. And the reason I decided not to is that my family always had dogs when I was growing up, and I’ll probably have other dogs in the future. And I thought, if I start getting tattoos of pets I’ve had and loved, I’m going to run out of space really quickly, and dogs and cats could get relegated to weird unseen parts. So I have these [tattooed] pawprints on my collarbone, and those are for all animals that I love. Otherwise it would just get out of control. I would just be a living canvas of dogs and cats.

If Violet got a tattoo, would you be mad? What if the tattoo was of you?

No, I think it’d be super cool and badass! But actually I think if it was of me, I think that would be weird. I think I liked it better if I thought it was, like, a favorite treat.

Who is your biggest celebrity dog crush?

Oh my God! I just like looking at pictures of Corgis online. So I feel like it doesn’t have to be a specific corgi. I feel like all Corgis are celebrities to me. And if I’m out, and I see a Corgi being walked, I go (gasps) “A CORGI!” as if I have spotted a celebrity. People have walked away from me for doing this.

What is the thing you love the second-most in the world (second to your pets)?

I don’t know, I guess…Diet Coke?

I thought you were going to say “writing,” but I really like that you said Diet Coke. 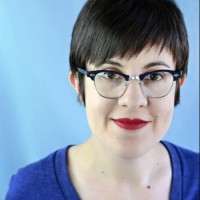 Allegra Ringo is a Los Angeles-based comedy writer. Her greatest passions are sparkling water and her dog Pistachio.