If you’ve read or watched any of the coverage of Shirley Temple’s death in the last two weeks, you’ve probably seen a mention of Bill “Bojangles” Robinson, the dazzling tap dancer who co-starred with Temple in some of her most memorable films. Temple probably had no idea at the time, but her dance routines with “Uncle Billy” were remarkable not only for their seemingly effortless precision and beauty, but also because they managed to shatter one of Hollywood’s biggest barriers without many people even noticing.

As her New York Times obituary notes, Temple “may have been the first white actress allowed to hold hands affectionately with a black man on screen” (an act that was surely allowed only by the fact that she was seven years old at the time.)

It’s impossible to critically examine Shirley Temple’s film career without talking about race and the way ethnicity was portrayed on film throughout the 1930s. According to black film historian Donald Bogle, “Blacks appeared so often in her important films that there was an inside industry joke that a Temple picture was incomplete without at least one ‘darky.’” And out of all of her co-stars, both black and white, there was no one more important than Bill Robinson.

The pair’s first collaboration was 1935’s The Littlest Colonel, set immediately after the Civil War. Robinson plays Walker, Temple’s grandfather’s stereotypically loyal butler. The film’s most memorable scene is the famous “staircase dance,” which begins when Walker tries to convince his young charge to go to bed (the “affectionate handholding” starts about 2 minutes in):

There are many deeply, heartbreakingly racist things wrong with this scene — Walker’s cheerful subservience chief among them, but the dance itself is still dazzling, all of these generations later.

Throughout her life, Temple would speak of her time working with Robinson in glowing terms and once named him her “favorite star of them all.” She devoted pages and pages of her 1988 autobiography to the memory of working with her “Uncle Billy” on their famous dance routines.

The feeling was most likely mutual. A New York City reporter profiling Robinson once noted that the walls of his home were covered with photos of various stars and other luminaries — including FDR — but that “for each one of those others there [were] two of Shirley Temple.”

On the surface, it was an unlikely friendship even if you took out the vast age difference and racial divide. While to Temple, Robinson was a kind and gentle figure, he was known for his quick temper, fondness for gambling and the little pearl-handled gun he always carried with. He was sharply criticized for his choice in roles and was frequently accused of being an “Uncle Tom.”

Temple and Robinson both became child stars at a very early age. Orphaned by the age of seven, Robinson was raised primarily by his grandmother, a former slave. He began dancing on stage when he was eight. By the time he was 11, he was popular on both the black and white vaudeville circuits, becoming known among the latter as a “pick” or “pickaninny” — a young black child performer who danced behind the white leads. Robinson grew up on the vaudeville circuit and developed his famous “staircase dance” along the way.

Here’s Robinson doing his staircase dance solo in 1932 in his mid-50s.

Although Robinson’s preternatural talent and obvious charisma was obvious right from the beginning — Fred Astaire once called him the greatest dancer of all time — he wasn’t “discovered” by mainstream (that is, white) audiences until 1928, when he was 50 years old, after he was cast in Lew Leslie’s hit Broadway revue Blackbirds of 1928. His routine from the show included his now-famous staircase dance and his performance was both a popular and critical success. In this audio recording, listeners can hear how Robinson’s transforms his feet into a percussive instrument that accompanies Don Redman and his orchestra.

Despite the late start, Robinson’s film career soared, and by 1937 he was making $6,600 a week — an astonishing sum for an African American entertainer. As for Shirley Temple, she was making $10,000 a week during this same period.

Robinson was limited onscreen to playing butlers and other subservient roles. The Littlest Rebel — Robinson and Temple’s second film together — was released later that same year. As the title suggests, the movie takes place on a plantation during the Civil War. This time around Robinson plays “Uncle Billy,” a loyal slave to Temple’s six-year-old Virgie Cary. The film begins with Uncle Billy performing at Cary’s birthday party at the plantation — a dance that is interrupted when the news of the attack on Fort Sumter arrives.

Needless to say, The Littlest Rebel is filled with unrealistic moments, like when the duo heads to Washington to personally ask President Lincoln to pardon Virgie’s father. They decide to tap dance on the street for change when they realize they don’t have any funds:

(The film is also memorable for a scene where Temple is briefly in blackface.)

From a very young age, Temple seemed to be well aware of the social gulf between her and her favorite co-star. She once recalled hearing about Robinson’s isolation during the filming of 1938’s Just Around the Corner, as he carefully followed the unwritten rules of Hollywood at the time:

We were performing in the movies for the last time, a moment which may have escaped us both. Leaving one last kiss on his shiney cheek, as I always did. I headed for my cottage and he towards the commissary. Later I was told that inside he paused to chat at the first circular table, where some other dancers urged him to sit. Declining with a customary chuckle, he had picked a single table against the back wall and eaten alone.

During the filming of Rebecca of Sunnybrook Farm (also released in 1938), after seeing that Robinson continually drove to her rented cottage in Palm Springs to teach her their dance routines, the 10-year-old Temple asked him where he was staying. After initially putting her off, Robinson explained he was staying in a room above a drug store on the main road.

Donald Bogle recounted the conversation that followed in one of his books:

“But that’s where chauffeurs sleep!” said Shirley. “But you’re not a chauffeur!”

“Now darling, don’t you fret. I’ve got a secret,” he told her. “I may be staying at the chauffer quarters, but my chauffeur is staying there too.”

What’s not clear is if Temple ever critically looked at the roles that were offered to her dear friend. Throughout the four films Robinson and Temple appeared in together he was consistently cast as a smiling, helpful, dancing helper. As Bogle points out, in Temple’s films “the black servants represented fellow children with whom she could sympathize with more readily than with real (white) grownups or even real children.”

The strong bond between Robinson and Temple would last long after the veteran dancer’s death in 1949. When Shirley Temple — now known as Shirley Temple Black — was named the Ambassador of Ghana in the seventies, she’d often talk about working with Robinson in her speeches and in private conversations. It was also said that Temple Black made clear to State Department employees and Ghanian officials that she despised Jerry Jeff Walker’s 1968 hit “Mr. Bojangles” — about a homeless man with a drinking problem — and refused to have it played at any official functions or in any car she was riding in.

Robinson’s film career began to wane after his last film with Temple, leading him to return to his theater roots. He did return to the silver screen in 1943 to star alongside a young Lena Horne in Stormy Weather, which was based in large part on his own rags-to-riches story.

And, yes, they dance on a staircase together and, yes, it’s perfect: 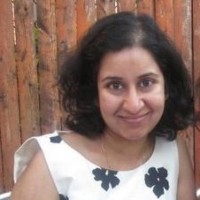 Lakshmi Gandhi is a freelance journalist and an editor at The Aerogram, where she writes about all things South Asian. You can find her on Twitter at @LakshmiGandhi.