For a long time, getting a film to appear on the big screen was a physically demanding task that involved setting up heavy reels in an intricate system of pulleys and slots. In recent years, more and more cinemas made the jump to a future of digital everything. This allowed people who lacked extensive know-how and/or male genitalia, like myself, to work as movie projector operators. While projectionists still have to perform some traditional tasks in the maintenance of the projectors (there are 17 projectors at my job and they are all my babies), these have been reduced to a very small portion of the job. Instead of setting up a physical reel, a projectionist creates a playlist for each show, telling the projector when the lights should go out, what sound to play, what images to show, etc. As a result, whereas my job used to be performed by four people at a time, it has now become a strangely solitary task. It is a job that is performed, mostly, in darkness (because any light behind a projector seriously messes up the projected image) and alone.

As a film projectionist, I get to see every movie on the first day of its release here in Belgium. However, since time is limited, I only get to see about five minutes of a film before such trivial things as “actually working” whisk me away. Five minutes of film may not seem like a lot, yet it is not hard to form a (ridiculously subjective and blatantly wrong) opinion about the following movies based solely on one or two scenes.

Through its promotional material, audiences were made to believe that both Uma Thurman and Willem Dafoe are in this film. They were not on the train though, so it is more than reasonable to assume that they are not in Nymphomaniac at all. Maybe they will make an appearance in Nymphomaniac: Volume II.

Verdict:  Watch it with your parents.

Paranormal Activity: The Marked Ones

What I saw: Hector, a guy that has a camera where his left hand should be, discovers that his friend Jesse is possessed. He tells Marisol, undoubtedly Jesse’s girl, and she hits Jesse unconscious with a baseball bat. Jesse is then kidnapped by an all-female cult who can apparently afford big real estate and fancy SUVs. When Hector and Marisol go into the cult-base to steal their friend back, general paranormal hijinks ensue. Five thousand jump scares later, everyone but Hector is dead. Hector flees into the house that the first Paranormal Activity took place in, looping this movie back to a film that no one could possibly remember any more. Young and old moviegoers alike leave their local movie theatres in baffled confusion, wondering who those two people in the last shot were. Tip: never introduce a new character in the last 5 seconds of your movie.

What I thought: For a movie titled Paranormal Activity the ghosts and demons in this story are all laughably dull (more like Paranormal Passivity, am I right?) Whereas this collection of jump scares may be useful to trick your date into thinking their constant adrenaline rush is due to your inherent awesomeness, they do not make for a particularly engaging film. If this movie is anything like its predecessors–and there is no reason to assume it is not–it is also not unlikely that these jump scares are limited to the final fifteen minutes.

Verdict: Go see the first two-thirds of any other film. Sneak in to watch the final part. Laugh.

Bonus Fun Fact: this movie has a budget that is 333 times bigger than the original’s, missing an obvious opportunity to get the number of the beast in there.

Verdict: Download it illegal- I mean, watch it at a friend’s house who owns a legal copy.

What I Saw: Harold and Maude/Martin and Philomena are working as detectives in America. They are trying to track down Philomena’s son to, presumably, kill him or something. Along the way, there are some awkward suicide jokes. In a hotel bar they talk about Guinness because apparently Philomena is Irish even though she does not sound movie-Irish at all. The duo manages to track down their target’s boyfriend who shows them some home movies. Dame Judi Dench cries, I cry, everybody cries.

What I Thought: This film is overflowing with that charm and glowing positivity that only a British film can bring out. It would be a solid enough film on its own yet probably forgettable. What makes Philomena worth everyone’s time, of course, is Dame Judi Dench. She is better than us and has granted us a 98 minutes opportunity to gaze upon her face. Dame Judi Dench is here to let you feel all the feelings that could ever be felt, and to do so in the safe environment of her features. Steve Coogan is also nice I guess.

Verdict: Watch it at home (have a Dame Judi Dench marathon.) While you wait for a decent copy, listen to the soundtrack of 1995’s Sense and Sensibility again.

The Wolf of Wall Street

What I Saw: Unfortunately, not the part with all the porn. Jonah Hill drives to a parking lot to deliver a case of money to a magnificently mustached crook who I think is his ex-boyfriend. Drama follows because the talking handlebar mustache never called Hill back after a night of passion. Hill causes such a scene that, after he conveniently drives of, police arrest the thug. This is apparently reason for celebration so Hill and Leonardo DiCaprio set out to get high. We see DiCaprio rid his body of all previous substances by means of an enema. The drugs don’t work and they are forced to watch Family Matters completely sober.

What I Thought: These scenes were basically scenes from a Seth Rogen-comedy minus Seth Rogen, so I honestly don’t see what all the fuss is about. They use the word ‘fuck’ a lot, which appears to be the only thing news sources have to say about The Wolf of Wall Street. Jonah Hill and Leonardo DiCaprio do form a very charming duo in this bromedy. Much like their predecessors, Harold and Kumar, I hope that they too will discover the true feelings of love and companionship underlying their stoned escapades.

More importantly, the scenes I saw contained no wolves. I feel that this is vital information, so I shall repeat: there are no wolves neither on or around Wall Street. If you were hoping this movie would be like Snakes on a Plane but with wolves instead of snakes, and Wall Street instead of a plane, you are out of luck. Also, you have a really weird taste in movies and an impossibly literal meaning-minded brain.

Verdict: Its Scorsese. Go watch it.

Bonus Fun Fact: The actors snorted crushed Vitamin B during scenes featuring drug abuse. They claimed that, unlike actual cocaine, it gave them more energy to perform. Don’t do drugs. 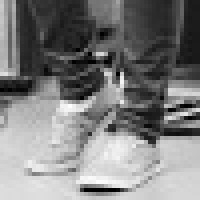 Laura Aerts is a writer living in Antwerp. When she is not watching and talking about movies, she makes music.