The Dark Is Rising: A Literary Pilgrimage

The Toast’s last literary pilgrimage was to Haworth, home of Wuthering Heights.

There’s a line in one of my favorite fantasy novels, Pamela Dean’s The Whim of the Dragon, which I think about all the time. Ted, one of the main characters, is contemplating the Secret Country, the fantasy land that he and his sister and cousins have found themselves in – which they may or may not have made up – and he realizes something. “The Secret Country was smoothed to the contours of his mind (or they to it.)”

“Smoothed to the contours of his mind.” That’s how I feel about my favorite books, the ones I go back to over and over again. They dig in to my brain and carve out their own space, one I can visit whenever I reread them, or even when I just think about them. But that space isn’t visual. When I revisit the world of The Secret Country trilogy, I don’t walk along its paths or through the halls of its castle. I’m not a visual reader; rarely do I see a movie playing when I read something. It’s the words themselves, the shape and rhythm of them, which imprint on me. It takes a special writer to put pictures in my head.

Susan Cooper is one of them. I first read her five-book series, The Dark is Rising sequence, in elementary school, after Narnia, I think, but before Harry Potter. This may be one of the reasons that as much as I love Harry, my heart belongs to Susan Cooper’s Will Stanton and Bran Davies, and Simon and Jane and Barney Drew, and Merriman Lyon, and the beautiful bits of the United Kingdom where the epic struggle between the forces of the Dark and the Light took place.

In spring 2011, I’d graduated college and been working for nearly a year. For the first time in my life I had a little money saved and vacation days to burn, so I decided to take a trip to the UK. I knew I wanted to spend time in London, where I’d studied abroad, and because of The Dark is Rising books, Wales was also high on my list. I hoped to see Cadair Idris, the mountain that plays a central role in Cooper’s The Grey King, and lucky for me, there was a hostel in nearby Corris. I booked flights and rooms, bought train tickets, told friends that I was coming, and at the beginning of July, I got on a plane.

I arrived in Machynlleth, Wales on a beautiful Sunday afternoon. From the train station I took a taxi up the nearly six miles of winding, climbing road to Corris. I left my bags at the hostel and went out to explore. I wandered past little cottages and up along the road that ran the length of the valley the town was nestled in. Looking down at the houses, I almost felt as if I was on one of the Old Ways that are crucial in the books, those nearly-forgotten roads and paths with history and latent magical power.

Looking down at Corris from the path along the valley

Back at the hostel I met a pair of German travelers who were planning to drive over to Cadair Idris the next day, and they offered to take me with them. I was grateful, since it would’ve been a long walk along a major road to get there – not a great idea if I was hoping to climb the mountain at the end of it! From what I’d read, the climb only required hiking along a path and steps, not actual rock climbing. Hiking I could handle.

Cadair Idris is part of Snowdonia National Park. Tons of walkers and hikers climb it every year. At the hostel they told us that school trips with small children go up all the time. Cadair is apparently translated as “chair”, making this the “chair of Idris” and Wikipedia tells me there are a couple guys named Idris it could refer to. One is a giant. The other is Idris ap Gwyddno, a prince who may have bested the Irish in battle on the mountain. I’m not sure if one of them was the inspiration for the Grey King, the malevolent great figure of the Dark who inhabits the mountain unseen and influences what happens nearby in Susan Cooper’s story, but either way the mountain is steeped in legend, both historical and fictional.

The start of the hike up Cadair Idris

The next afternoon we drove along the twisty roads and parked at the base of the mountain. After twenty minutes of huffing and puffing up a stone staircase through the trees, I gave up. I was wearing sandals and too many layers, and carrying too much stuff, but the main problem was my companions. They were just too darn fast! The sign at the mountain said the full circuit hike took, on average, five hours to complete. These guys did it in four.

The steps up Cadair Idris

There’s a legend that if you spend the night on Cadair Idris you’ll wake up either a madman or a poet. At the very least you’ll wake up with a couple hours walk ahead of you.

At the base of the mountain was a lake, Tal-y-llyn, and I decided to walk around it while the others hiked. Tal-y-llyn also featured in The Dark is Rising sequence as the “pleasant lake” by which the “Sleepers” lie. The Sleepers are dead kings who are roused by the playing of a magical harp and ride to help the Light in the final battle against the Dark. When Will Stanton first visits the lake, he nearly rolls down the mountain into the water through the malice of the Grey King.

It took me a while to find the right path to get around the lake, but when I did I marched along it, looking at the water, feeling hot but glad to be there. There were sheep up on the hill and one seemed to have escaped the fence and made it down to the side of the road. I wondered whether I should do something about it, but decided someone who knew whether it actually wasn’t supposed to be there, and who it belonged to, would probably happen along pretty soon.

In the book, Will’s aunt calls Tal-y-llyn the loveliest lake in Wales, and despite Will’s experiences there, I could see why. From a parking lot at the far end of the lake there was gorgeous view back at Cadair Idris. I stood by the lake and took a million pictures as a swan swam past and made the images that much more picturesque. As I continued on I found the other side of the lake to be shadier, and there were more sheep. They stared at me as I went by, and some of their bleats sounded eerily like human moans.

The loveliest lake in Wales

I felt like I was intruding on someone’s private property as I walked when I passed a house and a few stone cottages. An abandoned stone cottage plays an important part in The Grey King, and while it wasn’t located right by the lake in the book, I still felt totally justified in pretending that this was the cabin where the Grey King exerted his power on a poor dog.

After I met up with the guys and headed back to the hostel, they showed me their pictures from the hike. The part that interested me the most was Llyn Cau, a lake up the mountain that Susan Cooper talks about in Silver on the Tree. Legends say that a monster, the afanc, lived in nearby Llyn Barfog until King Arthur killed it, or until he cast it into Llyn Cau. If there was still a monster there, they didn’t get a photo.

I didn’t see everything I wished I could have on that trip. A car and a travel companion, or at least a better knowledge of the buses and a little more time, would have helped. But the places I did see have melded with the images I had before visiting, enriching the books’ landscape in my mind. Now when I read about Will’s visit to an old churchyard, I see the one I visited in Corris, and when I read about his drive to his uncle’s farm I think about the winding roads I rode upon.

A churchyard in Corris

When I visit Wales next, I’ll hike up Cadair Idris and see Llyn Cau for myself. I’ll find Craig yr Aderyn, the Door of the Birds where Will opens the oldest hills. I’ll make my way to Aberdyfi and take the Panorama Walk to see the Carn March Arthur, a hoof print supposedly made by King Arthur’s horse. From there I’ll visit Llyn Barfog  and make sure the afanc is really gone.

Near Llyn Barfog there’s a place where one can hear a beautiful echo, and in the book Will sings to the echo and the mountains sing back. There’s a line, a part of the puzzle that they’ve discovered, “Y maent yr mynyddoedd yn canu,/ac y mae’r arglwyddes yn dod.”, that means “The mountains are singing and the lady comes,” and in the story when the mountain sings the lady does come. When I go, I’ll sing to the echo myself and see who turns up. 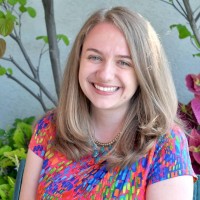 Sarah Evans is a writer of fiction-in-progress and blog posts about doing neat things in NYC. Besides children’s books, she compulsively reads fairy tales, romance novels, travel memoirs, and in a pinch, the ads on the subway.