As The Toast searches for its one true Gal Scientist, we will be running a ton of wonderful one-off pieces by female scientists of all shapes and sizes and fields and education levels, which we are sure you will enjoy. They’ll live here, so you can always find them. Most recently: When a Scientist Bakes Bread.

Well, the Earth’s temperature is currently 1 to 2ºF higher than usual, an indicator that something within our planet is messed up.

Temperature records from modern weather-thermometers date back 100 or so years depending on the location. But compared to Earth’s age—4.6 billion years—that’s nothing; if we condensed the Earth’s age into 1 year, the modern industrial era would be the last two seconds, with humans having been on the planet for minutes.

So how do we retroactively measure Earth’s temperature? While we can’t retroactively measure what our body temperatures were a day or year ago—so I think—the Earth actually leaves clues of its past climate conditions. These clues are hidden in nature all around us, and like detectives, we can uncover these clues, piece them together, and reconstruct how temperatures have evolved over time. Okay, maybe not as cool as Nancy Drew, but pretty close! We even have a snazzy name for these clues: “proxies.”

There are two main criteria for finding proxies of Earth’s temperature:

Therefore, we are looking for objects found in nature that are old, dateable, and climate-dependent.

On land, trees are the most obvious old, dateable, and climate-dependent entity. Certain trees can live for hundreds to several thousand years, and as we all learned when we were youngsters, we can determine their age by counting how many rings they have in their interior; their massiveness therefore exudes their age. I recently went to a redwood forest state park in northern California and we fit our entire group of 13 scientists plus one dog inside the trunk of a redwood.

The thickness of the tree rings is directly related to changes in temperature—tree rings typically grow wider during warm conditions (think about how your hands swell when it is hot out) and narrower during cold conditions (think about how your rings are all of a sudden too loose in winter). So the rate of growth of trees can provide a proxy record of Earth’s temperature in the past. Rainfall (or lack thereof) also affects tree growth in a discernable way.

But these trees only give us a small piece of the big picture: they aren’t in the poles and the oceans. And in the tropics, the lack of seasons makes it hard to even date the trees. So we need something else.

In the polar regions—the Arctic and Antarctic—there isn’t much there. I actually spent a week in Greenland once on a science adventure. It was below -36ºF (or ºC—practically the same thing when it’s this cold!) and our toilets were deep holes in the ice (envision a port-a-potty ice sculpture).

While the toilet holes were probably around five to ten feet deep, the thickness of the Greenland ice sheet is generally over 1 mile deep, and nearly 2 miles deep at its thickest point. For reference, the ocean is on average around 2 miles deep.

The snow on Greenland and Antarctica accumulates in incremental yearly layers that are (relatively) easily distinguishable. Scientists have dated ice back to 800,000 years! When the ice forms, tiny air bubbles are trapped, essentially preserving a piece of the ancient atmosphere. Analyzing these air bubbles can reveal the concentration of heat-trapping gases—such as carbon dioxide and methane—in the atmosphere at the time. The ice composition itself can also provide a record of global temperature.

Ice is frozen water, made up of two hydrogen atoms and one oxygen. Oxygen comes in two forms: a light version and a heavy version (also referred to as isotopes). It is easier to evaporate light water than it is to evaporate heavy water, because it requires less energy. The opposite is also true—it is easier for heavy water to condense than light water. Bad analogy: it’s easier to lift a slim person out of a pool, and it’s easier to drop a fat person back into the pool.

Okay, so this is the part where even my eyes glaze over. If you follow along and understand the following, you deserve a prize. Email me and we’ll sort something out.

The ice in glaciers is evaporated water from the oceans, that later falls as snow and becomes compacted in ice. When water evaporates, the heavy water is either left behind, or easily rains out in the atmosphere (larger person left behind or falls back into the pool). The light water, however, can make its way to the poles. Ice sheets therefore have more light water than the oceans. In a warm world, the ice sheets melt and the light water returns to the ocean. But in a cold world, the light water is trapped in the ice for long periods of time. By examining the amount of heavy water in ice cores, we can reconstruct past temperatures over hundreds of thousands of years.

Because this light and heavy water balance relates to the ocean in addition to ice, we can find similar types of records in the ocean. When sea creatures die, they slowly sink to the bottom of the ocean, where they pile up over time. There are literally mountains of dead things at the ocean floor. The minerals in the shells of tiny dead animals contain information about how long they have been dead, and what the temperature was like when they were alive.

We are beginning to uncover the vast amounts of information that these microscopic fossils can provide. We can not only analyze ratios of heavy to light oxygen, but there are a number of minerals in shells in which the exact composition is temperature-dependent. For example, there is more magnesium relative to calcium in shells at warmer temperatures. Further, these animals have temperature preferences and tolerances, so that their presence or absence also provides clues of Earth’s temperature. These ocean sediment records date back tens to hundreds of millions of years—beyond the era of the dinosaurs!

While these records may be far from perfect (sparse, multi-causal, requiring calibration, difficult to obtain, etc.), they provide a decent sketch of Earth temperatures over time, and especially enough information to tell us that the recent rapid rise in temperature is anything but normal. The Earth certainly has a fever, and we need to come together now more than ever to take care of her. 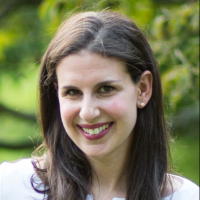 Dr. Ilissa Ocko is a postdoctoral science fellow at the Environmental Defense Fund in New York City. She is passionate about researching climate change and communicating the science effectively to a variety of audiences.