Interview with Maya Schenwar, Author of Locked Down, Locked Out

Maya Schenwar is Editor-in-Chief of Truthout, an independent social justice news website. She has written about the prison-industrial complex for The New York Times, The Guardian, The New Jersey Star-Ledger, Ms. Magazine, Prison Legal News, and other publications. She is the recipient of a Society of Professional Journalists Sigma Chi Award and a Lannan Residency Fellowship, both for her writing on prisons. Prior to her work at Truthout, Maya was Contributing Editor at Punk Planet magazine and served as media coordinator for Voices for Creative Nonviolence. Her new book, Locked Down, Locked Out: Why Prison Doesn’t Work and How We Can Do Better, was published last month.

Originally I planned to introduce this Q&A casually, sharing an anecdote about the sweet brilliance of my friend Maya Schenwar. But none of us live in casual times. This is a time of mass trauma. It is time marked by the face of Mike Brown’s mother, the voice of Eric Garner’s widow, streets filled with young people unwilling to watch time loop over itself, in the chokehold of a history in which Black Americans have never been able to breathe freely. Now is the time for the language of honesty. These days it sounds like the rallying cry “Black Lives Matter.”

It also sounds like the title of Maya’s book, filled with the voices of her incarcerated pen pals—one of whom is Maya’s own beloved sister, Kayla. Woven together with her family’s experience facing the formidable hurdles likewise faced by millions as they try to remain connected to a locked-down loved one, Maya’s analysis of our “prison nation” is that of a system rooted in the dehumanization of people of color, particularly Black people. Her assertion that “prison doesn’t work” does not revolve around wrongful convictions, nor does her challenge that “we can do better” point towards mild reforms. Instead her book demands we wrestle with questions posed by indictments and non-indictments alike. What would truly provide healing and safety for our society?

By phone and email, Maya and I discussed that and more, beginning with the question of how Locked Down, Locked Out came to be.

Maya Schenwar: I’ve been writing, commissioning, and editing stories on prison since I started as an independent journalist. Meanwhile my sister had been in and out of jail and prison for nine years. But I never brought in the personal element. I did not want it to be interpreted as if my sister’s story was representative.

Over the years, I also had dozens of pen pals, who wanted their experiences to have a larger platform. But articles on the internet are there one day and gone the next, and that’s part of the problem with prison: people disappear. I realized I needed to work on a lengthier and more permanent project. I wanted to write in a way that wasn’t “Here is my thesis and now I’m going to prove it…” I wanted the book to be a process of other people telling their stories, and my family telling its story, to arrive at other ways of envisioning justice.

Sarah Macaraeg: The book’s voice is unwavering. But was it difficult to share your story?

Maya: One piece of advice I got along the way and really valued was, “Be honest, even when your honesty conflicts with the point you are trying to make.” That conflict ended up happening in the course of writing Locked Down, Locked Out quite a bit: my beliefs didn’t always match up with what I was feeling or doing. I eventually thought, “I have to acknowledge this, otherwise the book will come across as preachy and annoying.”

At certain points, I did want my sister to be incarcerated, because she was creating all kinds of problems for herself and my family. Not because she wanted to, but because we live in a society that treats drug addiction as a crime and something that has to be hidden, which prompts all kinds of disasters, and sometimes death. At the time, I thought: “At least in prison she won’t die of an overdose.”

There’s another experience in the book, when my computer was stolen. This was a couple months after I interviewed a number of people on reasons to never call the cops. Once we realized my computer was stolen, the friend I was with mentioned calling the police, and without pausing I said, “Go for it. Yes.” But reporting the theft was not only totally unhelpful, it was psychologically demoralizing given my sister’s situation. I didn’t get my computer back, and I might have set off a chain that led to people being criminalized and arrested.

Sarah: Which bring us towards the book’s perspective. How would you describe it to someone coming across a radical critique of prison for the first time?

Maya: In a lot of rhetoric—from media, policy makers, and mainstream activists—there is an assumption that some people need to be in prison, and that reform is necessary to refocus our energy on punishing the people who should be in prison. We’ve been thoroughly trained to not have empathy for people who’ve been convicted of violent offenses—even though that could mean many things, and I believe all of us have the capacity to do violence. People have also been trained to be fearful.

My response, even to someone with no empathy whatsoever, is that prison doesn’t work. There’s an assumption that prison is necessary for “public safety.” What is most likely to perpetuate violence is putting people in a violent situation. Let’s look at what happens to people in prison. People experience physical and sexual violence. That’s “normal” in prison. The act of caging someone itself is violent and traumatic.

Meanwhile, people getting out of prison have not only experienced that violence and been traumatized by it, they have very few places to turn when they get out. Prison reduces their opportunities to get on track, get a job, and get housing.

Beyond that, and this is a big emphasis of the book: prison cuts ties between people. If someone has repeatedly, actually done harm—which a lot of people in prison have not—what will motivate them to turn their lives around is developing strong bonds, community, and positive relationships. Prison diminishes those relationships and often completely breaks them.

Sarah: Is there any harm reduction then that takes place in the system?

Maya: The legal system takes victims out of the equation. It’s the state vs. the perpetrator. Punishment of the person who has allegedly done harm is prioritized—instead of providing the person who has been harmed with what they need to get back into their life and heal. If it is a serious crime, support for the survivor is even more important, but instead there’s even more attention on the perpetrator.

Sarah: With non-indictments following the deaths of Mike Brown and Eric Garner, it’s difficult not to also see the legal system as a mechanism of granting cops impunity to be judge, jury, and executioners in the street.

Maya: If we think about the police evolving out of slave patrols and Indian constables, there’s definitely a sense they are part of the same system as prison. Even if you have to break it apart in order to understand it, the question of who is criminalized—not just who is incarcerated—is important to keep in mind.

There’s a lot of momentum around equalizing sentencing laws to get rid of disparities. Sentencing is just one part of the process. From surveillance to targeting, arrest, conviction, sentencing, incarceration, and parole, Black people are criminalized. At each of these steps, racist determinations are being made. Unless you start uprooting systems, you can’t erase what people call “racial bias.”

Sarah: The way you discuss the problem of prison being used as a “default solution” in the book reminds me of policing as well. “More police” seems to be the default solution to an essentially racist framework of “crime” oriented on struggling communities of color. But if we want to go the route of simple solutions for complex problems, why not transform police stations into job providers and substitute cops with social workers?

Maya: We’ve gotten caught in this tragic idea that prison creates jobs and supports communities—mostly rural white communities. But if we are truly invested in bringing this system to a halt, there needs to be wholesale reappropriation of resources. It sounds extreme, but it’s just about a way of doing things that values humanity instead of perpetuating destruction toward a certain section of humanity.

Sarah: Reproductive justice—which goes beyond choice to the right to parent children in safe environments, and have them or not—is an undercurrent in the book, given your sister’s experience. Feminism at large is not oriented on women and gender-nonconforming prisoners. What are some of the issues they face?

Maya: If you go to prison and you are pregnant, it’s very unlikely you are going to have an abortion, and that’s not because you might not want one. You might or you might not. But it’s usually not an option.

My sister, who entered prison pregnant the last time she was incarcerated, was forced to give birth under the eye of a prison guard, with no family present. She wasn’t allowed to go into labor naturally; her labor was induced at the convenience of the prison. She was separated from her baby after a little over 24 hours—and didn’t see her again until she was released from prison several months later. This is the story for so many mothers, except many of them end up losing custody of their kids permanently. (Child protective services agencies are particularly punitive toward Black women and children.)

Those are just a couple examples. For many incarcerated mothers, what motivates change or simply getting through such difficult circumstances is being with their children. Prison does the opposite of facilitating that.

Discussions of gender justice, as it relates to prison, also need to touch on the issues trans people face behind bars. Trans folks are regularly denied basic needs, including hormones and just being addressed as the gender they are—I have a pen pal who’s a trans woman living in a men’s prison, and they won’t give her my letters if I put her real (female) name on them. Often trans people are placed in solitary confinement for their “protection.” Keep in mind that trans people, especially trans women, are criminalized to an enormous extent, and are much more likely to go to prison in the first place—even more reason why we need to highlight the harm they’re facing while locked up.

Sarah: I’d love to end with more on your pen pals. What’s been their feedback, and your sister’s?

Maya: So far, my pen pals have loved [the book]. People seem glad I was asking them for insight, as opposed to just their experiences. I’m a journalist; I’m not an expert. A lot of the book’s suggestions on how “we can do better” are things people inside brought up with me. And thank god, my sister really liked it. Because otherwise I would have had to throw it away! 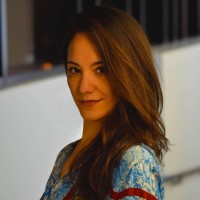 Sarah Macaraeg is a writer and journalist focused on exploring social justice issues via data-based investigations, essays, and oral history.