(1973) Do we fear demons? Or do we fear mere possession? Remember those scenes in The Exorcist? Demon girl creeping down the staircase like a spider; demon girl’s head spinning like a top; demon girl announcing death to all, then peeing on the floor? Demon girl clearly out of control. Demon girl is (gasp) prepubescent, premenstrual, hormonal! The patriarchy is powerless and must ascribe demon girl demonically possessed. But is she? What’s the cultural message? (The patriarchy made me do it?) The social consciousness’ fear of burgeoning womanhood? Women on the verge, girls with urges, hormonal surges and sex splurges? It is the horror of the whore, the female body in revolt, boy-toy exploits?

I was eight when my altruistic and socially conscious parents took in fifteen-year-old foster “child” Jerry. It was the winter of 1973 and the film The Exorcist had recently been released. My parents, avid cinemaphiles, had gone to see it, only my mother — probably due to her having been anointed at an early age in Catholicism, a byproduct of her colonialized, reservation school upbringing — spent most of movie’s length in the lobby smoking cigarettes and waiting for it to be over. She slept for weeks after with the lights on. Our new foster “child” Jerry boasted about having seen the movie — boasted because he wouldn’t have been old enough to get admitted — and one of his favorite ways to amuse and impress my sister and myself was to detail particulars of especially gruesome scenes as if describing the aftermath of a car accident. He recounted the horrors blow by blow. Vividly. He also laid the groundwork for monumental pranks. One of them involved rigging my mother’s dresser with strings and wires to slam the bedroom door shut after she entered the room. Another involved me lying in bed spitting pea soup and speaking some approximation of Latin or Tongues. These never panned out, but he did manage to get enough of his shit together to paint The Exorcist in red paint across the side of the backyard playhouse.

I have read post-feminist critiques on movies like The Exorcist, Carrie and The Exorcism of Emily Rose, and they all seem to view the “demon” as a symbol for female sexuality.  “Demons are a girl’s best friend,” one article surmised. The critiques point to the terror men throughout the centuries must have felt when confronted with feminine power. The articles point to the Salem witch trials, honor killing, foot binding and corsets. Not to mention infanticide, veiling, and female circumcision.

My first viewing of The Exorcist occurred sometime in high school in the basement TV room of a friend’s house, and ever since I’ve been haunted by unbidden images of possessed Regan MacNeil floating in her pea soup-stained nightgown while the priests shout the power of Christ compels you! For years, decades! such images have come to mind when I rise from the dark warmth of my bed to visit the bathroom. Flick goes the light, and the threat lessens, the demon girl scrambles back into the ether. It is this monster/boogie man that has forged itself into the neural pathways of my mind, and for reasons that have only recently become apparent to me, it’s been revelatory actually, like a breakthrough. Part of the reason for my indelible imaginings probably have something to do, if not everything to do, with our foster “child’s” habitual haunting of my own prepubescent burgeoning. I wasn’t in danger of being possessed by demons but having my virginity possessed by the fifteen-year-old sex maniac my parents deemed appropriate to live in our house. Not a day would go by that Jerry didn’t pin me down and torment me, that my developing breasts wasn’t the topic of discussion, that roughhousing always seemed to serve as just an excuse to feel me up. I developed early for my age and Jerry taught me that this was not a casual event, but that it should illicit special attention and not always unwanted special attention.

It was the seventies. Words like “inappropriate” and “pedophilia” hadn’t entered the national dialogue yet. I wasn’t especially alerted to the idea that what Jerry was doing to me was necessarily pervy or weird. He was just a kid, much like myself, except that he was older, a teenager. So for these reasons I never thought to tell my parents about it. I thought it was normal, I even felt flattered at times, sometimes liked the attention. Not always, but sometimes and only to a certain extent. Maybe if I hadn’t fought him off, put up resistance, he might have taken things further. He wasn’t the first adolescent boy who put his hands on me in that way. During visits to my mom’s rez, left behind at the house for a night of drinking by the adults, my much older cousin — like sixteen or older — on the pretense of being cold and wanting to cuddle up inside my sleeping bag with me for warmth, shoved his hand down my underwear, rooted around between my legs, for exactly what I didn’t understand. But it felt unwelcome and threatening, a personal invasion, and he stopped after I pushed him away from me. And that was the end of it. Maybe if sexual predation was a Judy Blume book I would have known differently, known it was wrong. Known enough to have been traumatized. Maybe if it was an after-school special or an episode of the Brady Bunch I would have responded differently, told my mother for instance, told anyone. Families weren’t having those kinds of discussions in the seventies, at least mine wasn’t. And despite my sixth-grade class introducing sex ed in the curriculum, only the basics were ever covered. My parents could sit in a theater for two hours viewing a film with a demon girl abusing herself with a crucifix, but broaching the topic of sex was off the table for family hour.

Jerry continued living at our house for the remainder of the school year and occasionally disappeared for two- to three-day stretches until my father must have realized Jerry’s rehabilitation was futile, that he wasn’t going to turn into an Eagle Scout overnight. So he returned him to whatever puppy farm he was rescued from. It was years later when I told my father about Jerry’s abuse. I’ve come to realize that it is the image of Regan MacNeil which serves as a symbol for my lost innocence. She haunts me. My parents in their neglect and ignorance inadvertently threw my childhood under the bus and I’m left with this special token, a souvenir t-shirt that reads: My parents took a permanent vacation and all I got was this stupid neurosis.

But is it ever too late to have a happy childhood? I’m still trying. Instead of fearing Regan MacNeil and all the other possessed girls from the oeuvre of possessed adolescent girl films, Disney needs to launch a campaign for the anti-princess. Imagine the merchandise! The anti-princess theme park. Ugly Stepsister bed sheets. Regan lunchbox replete with demon head twist-off cap thermos. Carrie White tampons and training bras for those “dirty pillows.” Nightgowns with your favorite possessed girl printed down the front. Give me the underbelly of disenchantment, the un-glittered, un-pink, un-speckled. As much as I wanted to be a Disney princess, as much as I admired Cinderella and Snow White and Sleeping Beauty, a part of me was ruined for that. I never identified with the princesses, preferring instead the stepsister, the wicked queens, the Ouija Board curious girl. As repellent and frightening as they were, I must have known I wouldn’t be, or couldn’t be, a princess. But it’s never too late. 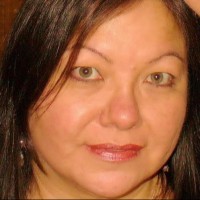 Tiffany Midge is the recipient of the Kenyon Review Earthworks Indigenous Poetry Prize for “The Woman Who Married a Bear” (forthcoming, University of New Mexico Press) and the Diane Decorah Memorial Poetry Award for “Outlaws, Renegades and Saints; Diary of a Mixed-up Halfbreed” (Greenfield Review Press).