An Excerpt from The Arson People

Elsie Davis and Nathan are making out in the back of Nathan’s truck and the curved metal of the truck bed is digging into Elsie Davis’s back. She gets on top of him and he reaches up, grabs her breasts, her rounded stomach fat, wriggles up face as if smelling something bad, says, “Your titties are too saggy, there’s nothing to them,” pushes her off. Embarrassed, she gathers herself, making the truck bed bounce. “Fuck you,” she says under her breath, lighting a cigarette. “I want to go home,” she says. Nathan obliges her and they do not speak until

until Elsie Davis runs into Nathan at a party across town at a mutual friend’s house. After a couple of beers she finds the nerve to say,

“What are you doing here?” he asks.

There is a girl next to him she recognizes but doesn’t know.

The girl is tiny with bleach copper hair because her hair so dark true blonde won’t happen, a black velvet choke chain with a metal rose pendant hanging from the middle, a chevron patterned bikini top with an oversized black tank top over it.

Elsie Davis looks at the floor, ceiling, bites her lower lip until it bleeds so she doesn’t start to cry.

“I’m going outside,” the girl she recognizes but doesn’t know says to Nathan while giving her a sad, pathetic look, poor stupid fat girl what is she even thinking?

Nathan watches the girl step out the sliding glass doors, looks Elsie Davis in the eyes.

“Look, leave me alone. Whatever happened the other night was a fluke thing. I am trying to get with Koharu-Mei, alright?”

Loudly says: “So stop trying to talk to me OK? God, I don’t like you.”

Elsie Davis starts with the back deck area which has a Hawaiian theme. Nathan’s parents are renown for their tiki parties and the backyard is always set for a party.

She pulls all of the decorations off of the enclosed fence area, cut outs of ukuleles and hula-dancers. There has to be at least 100 of them and she carries armloads, piling them in front of the door leading to the backyard. She stealthily douses the entire two tier deck in gasoline, three cans from Nathan’s parents’ shed and two cans she clumsily brought with her.

Once that is done, she hops the fence. Before she hops the fence, she throws all the unlit tiki torches over with her. She lights each one individually and throws them like a javelin back over the fence and into the yard. She watches the first one as it hits the edge of the stairs, it makes her heart jump, makes her palm sweat like she is kissing. She throws the rest of them, one right after the other, and doesn’t matter where they land—whoosh—whoosh—whoosh.

She runs to a very small patch of trees the alleyway behind Nathan’s house to watch the entire back of the house go up in flames. This is the best part, the watching. It is so beautiful and the beauty is what kills her the most.

Koharu-Mei lives on this road with her humongous family in a humongous house right on the lake with private beach front access.

Koharu-Mei goes to private school and drives a brand new Audi, as does the rest of her brothers and sisters, they do not car pool.

Koharu-Mei looks so good in a bikini, which Elsie Davis will never be able to wear.

Elsie Davis wore a bikini once in middle school when she was running three miles a day in order to go to the woods far away from her grandmother’s house to smoke exactly four camel wide light cigarettes. Her grandmother was convinced that she was doing it to get fit but really she was doing it to smoke. After she would spend the morning smoking, she would come back to the house and lay out in a pink halter hand-me-down. That was the first and last summer of Elsie Davis’s life that she wore a bikini.

Koharu-Mei lives in a bikini in summer and Elsie Davis, now knowing who she is, sees her at the gas station with all of her equally as beautiful and skinny friends that have glimmering skin and dark hair. Koharu-Mai has a summer uniform: oversized tank top and very small cut-off shorts that make Elsie Davis sink into her skin.

Elsie Davis is going to set Koharu-Mei’s Audi on fire. 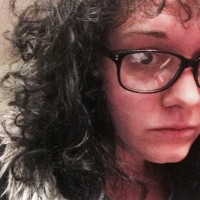 Katie Jean Shinkle is the author of Our Prayers After the Fire (Blue Square Press, 2014), and the appearing excerpt is from The Arson People, forthcoming from Civil Coping Mechanisms. She serves as Associate Editor of Denver Quarterly.