The Lie Tree: A Short Story

Go out to the Lie Tree, daddy would always say.

No matter the size of the whopper, us kids marched down the dusty back road, across fallen leaves and prairie dog holes, to the stately pecan tree, its twisted branches beckoning the sky. Sometimes, if the lies were really bad, we were forced to crawl the half mile on our hands and knees until we reached roots. Later, when the scabs hardened, we’d pick them off and feed them to the chickens.

One day, daddy said, he’d chop that tree down and peel away the layers of sable-colored bark so we could see our lies imprinted on the smooth flesh beneath. Lies always clung, daddy said. Stained your skin like they stained this here tree.

Mama lied when she met daddy. Told him she was already with child, and then she was. He thought her name was Clara up until the day Joey was born. And then she whispered in his ear amid the squalling baby and cigarette smoke stained air, the name’s Celeste.

I hate it, Bud said, kicking at its roots. He ground his grubby little fists up and punched the air in front of the tree.

Brushing your teeth, Bud, it ain’t that hard to do, Joey said, ashing a cigarette.

Sitting on the ground, I drew knees into my chest. You’re gonna get busted for that, ya know.

Dad does it. Joey shrugged. C’mon, Bud, out with it. We ain’t got all day.

Lip trembling, Bud whispered his lie to the tree. Bark grew underneath his fingernails as he gripped its sides and held tight. Bud started to cry and Joey patted the top of his bowed head.

I kept my mouth shut and thought about everything the tree knew about me.

The butterscotch colored vinyl of daddy’s that I scribbled my name on again and again in Sharpie.

Grape juice spilled on a couch cushion, flipped over to conceal the evidence.

Sneaking out of the house to join Marcie Cummings at a senior party where we both kissed the same boy.

Trying to pass off six beers as two.

Rob and just where, exactly, his hands have been.

Clementine, be mine, Rob rhymed. He had a rhyme for everyone in town. Betty from ‘bama, fresh from the ‘slama. June, June, take me to the moon.

Rob wore an eye patch over his right eye and painted hand-lettered signs for local business establishments. He wrote poems on telephone poles across our town. His bad eye hurt, but only on days when it rained.

Pressing a hand against his patch, legs wrapped around his waist, Rob lifted and steadied me against the Lie Tree. Bark flaked, rubbed off with our up and down motions, tickling the small of my back and leaving long scratches.

Paint-stained fingers in my hair, Rob said, I could punch you through drywall, Clem.

Mama said we were born into a family of liars. People who couldn’t tell the truth even if there were pliers gripping their tongues and bamboo shoots under their fingernails. It’s in your genes, she’d claim, and I’d check the pockets of my Wranglers to make sure I wasn’t carrying around any of our family taint.

When Joey lied about skipping school to fish the Canoochee he was made to live under the Lie Tree for two days in the dead of summer. I tried to smuggle out a pitcher of water but was stopped at the door. Daddy’s biceps bulged as he crossed his arms and pointed me back toward the kitchen.

Joey got sick a few days later but no one ever said anything about that.

When the world took mama, her tombstone read Clara. It made me wonder if daddy had always loved the woman who had lied to him first more.

I’d guess at the lies daddy would tell the tree. Because he sent himself down there too. Can of suds in his hand, shoulders hunched. He’d always return home red-faced and crying about mama, his shaky hands sloppily reaching for a hug from one of us kids. He’d sit us on his lap, tell us he loved us and we’d say the same thing back. Those nights were the good kind of nights; where no one ever got in trouble for their lies.

Rob told me to do to the one honest thing I’ve done since birth.

Rolling out of his arms, I said, I haven’t been honest since birth.

I practiced a lie to the Lie Tree before telling it to daddy. Ran a finger down one of its long roots, chipped off a piece of rough bark and stuck it in the pocket of my jeans before crawling back to the house and telling daddy I’d be home for dinner.

Far, far away Rob took me from the Lie Tree.  Far away from the town in a busted, rusted, gassed up station wagon.

One hundred miles traveled and four oatmeal cream pies polished off, I leaned across the bucket seat and cupped Rob’s jaw. Held his bad eye under a soft palm. I wriggled close, closer, until his paint-stained hand clutched my thigh and told him, my name’s Cassandra. 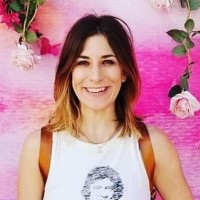 Jules Archer’s work has appeared in SmokeLong Quarterly, >kill author, PANK, and Foundling Review, among others. She is a copywriter who likes red wine, loud music and curse words aplenty.