First, my disclaimer: I am not a doctor. Yes, I study bones and exercise, and I do act like a know-it-all, but whatever I tell you can not be taken as a replacement for medical advice. This shouldn’t be shocking to most people, as it says “archaeologist” pretty clearly on my business card. What I practice – and am working towards my doctorate in – is bioarchaeology, the examination of human remains in archaeological contexts. My research gets even more specific, combining bioarchaeology with biomechanics and exercise science, studying how movement affects bone density, shape, and structure. I apparently make a pretty shoddy running partner as I’m always commenting on how people run, and a weird party guest because I encourage everyone to show me the crazy things they can do with their joints and muscles, but also a good half-doctor when friends are too busy or lazy to make a physio appointment when they break themselves. (The answer is always RICE, and once in a blue moon, get an x-ray so I can add your injury to my teaching collection.)

My research is pretty niche: I’m looking at social divisions of labor among ancient inhabitants of Nubia, or northern Sudan, and variations between hunter-gatherers, farmers, and pastoralists. I get to examine hundreds of ancient leg bones (primarily the tibia, or shin bone) using a 3D scanner. The tibia is particularly useful because it’s vertically oriented and responds to activity – the femur (thigh bone), especially in women, is often angled to accommodate wider hips, and bone changes have been shown to correlate more with body size and climate.

To figure out how ancient people used their bones and muscles, I look at lots of research on both bone chemistry and sports science. The fact that amazes people the most is that your bones are not static – they grow and change in response to your lifestyle. A study that makes this quite clear examined adolescent girls playing tennis. Tennis is basically a one-armed sport: unless you’re ambidextrous, you use your dominant arm (not to be anti-lefty, but most of the time it’s the right arm) for serving, forehand, and most of the support for backhand. So the researchers were able to see a clear change in bone mineral density over time between the dominant arm and the other arm – in some cases the bones of the dominant arm were up to 15% denser. (They were also tested against controls, who saw no difference between arms and lower bone density overall.)  I’m looking at the same concept, but in individuals who lived and died between 5000 and 1500 years ago. I can see clear differences between individuals – some have tibias that are long and pointy in cross-section, and others that are rounded and teardrop-shaped. Some of these differences are based on sex and size, and others are due to the types of activity they practiced.

Image: Tibial cross-sections. Left: a teardrop-shaped tibia and right: a sharkfin-shaped tibia. Courtesy The British Museum and thanks to Thomas Davies.

How does this work? There are two types of cell responsible for bone maintenance – osteoblasts and osteoclasts. Osteoblasts build bone, and osteoclasts take it away. The body is highly responsive to changes in activity, and bone is constantly updating itself accordingly. The general principle is that your body thinks what’s happening now will happen forever. In response to more activity (known as physical stress), bone will accumulate more osteoblasts to strengthen itself. Each step makes tiny microfractures, which tells the bone “Come on, I’m breakin’ here! Give me more strength!” and the osteoblasts pile on. In the absence of activity – during periods of prolonged sitting or lying down – the osteoclasts come in to take away unnecessary bone. Generally it gets sent out of the body in your urine. The basic principle is that the more activity you do, the stronger your bones will be. Studies of astronauts show that even a few days in space, where you don’t need to do physical work because you can just wear socks and sweats and float around, will sap bones of their mineral content, and it can take up to years to replace that bone. The interesting thing about this osteoblastic cycle is that – as mentioned above – it can actually change the shape of the bone. Another study has shown differences in tibia shape between runners and hockey players – because the runners put more stress on their tibias in a consistent front-to back direction and the hockey players put more stress on their tibias side-to-side, the osteoblasts have strengthened their tibias in unique ways to accommodate that stress. The corollary of this is that we can observe similar shapes in ancient humans and estimate activity patterns.

But wait! There are always caveats. The best time to build bone is right around puberty, during the adolescent growth spurt. Yes, the time when you might get your period any moment and you smell terrible and your limbs are flying around all uncoordinated – this is when you needed to be doing the most exercise. (But watch out! Too much exercise, especially combined with eating disorders – I’m looking at you, ballet and gymnastics – and your periods stop and your bones get weaker.) Bones continue to grow with less velocity until the early 20s, stopping slightly earlier in women than men, and generally have completed their growth (in both length and density) by age 25. Sorry, over-25s: it’s all downhill from here. Archaeologically, adolescence was often the time when young people would start to take up adult social roles and “occupations”, if they hadn’t already, so we can see what they would probably have been doing for the rest of their lives.

So, osteoporosis. Where does that enter the picture? Let’s first do some definitions. Osteoporosis is a clinical condition where the bones are 2.5 standard deviations below average bone mineral density (BMD), or the amount of calcium in keys regions like the hip and lower back. Low BMD puts people at risk for serious fractures. Average BMD is generally stated to be 1 g/cm2, but it varies by age and sex. Another method is hand examination of a hip x-ray to count the number of trabeculae, or struts of bone cells, in each direction. This method, called the Singh index, could possibly be more useful for detecting differences between and within populations. Osteopenia is the pre-diabetes of osteoporosis: it’s 1-2.5 standard deviations below the mean. It’s important to note that osteoporosis is not a disease in itself but a risk factor for fractures.

There have been numerous articles written about women and exercise. I often get emails from my mom and her friends with the latest from WebMD, usually with headlines like “Scientists Recommend Extra 23 Minutes of Vigorous Exercise to Promote Bone Health” or “These 15 Foods and 5 Exercises Prevent Bone Loss” or “Will Drinking Water Increase Bone and Hair Health?”. They, as perimenopausal women, want to know what to do with this mass of sometimes contradictory information. I will now tell you the Secret Tricks to Maintaining Bone Density Doctors Don’t Want You to Know: you had to build it in puberty, and you have to keep exercising to maintain it. As far as my research has shown, you can keep building bone and increasing bone density up until your 20s. After that, you can maintain or decrease your bone density. It’s quite easy to decrease bone: just do nothing. To maintain it, you need weight-bearing exercise. Osteoblasts respond to microfractures, so the way to keep those osteoblasts occupied is by running, jumping, bouncing on your bosu, Zumba, those crazy-intense boot-camp push-ups. Things that (sadly) will not work: cycling, swimming, yoga. Not that those aren’t healthy activities! They are still excellent for the heart, for weight maintenance, for stress. But they do nothing for your bones.

And then there’s menopause, that scourge! Estrogen – the surge of which is partly responsible for bone growth at puberty – significantly decreases at menopause, negatively impacting bone density; additionally, normal age-related changes include more faulty chemical signaling and hormones running amok, causing irregular calcium and phosphate processing.  At this point, doctors usually recommend that women take up weight-bearing exercise, but it may already be too late by then and they may be diagnosed with osteopenia. My mom had some bone scans taken over the last few years, presented below:

At age 49, her BMD was almost 1 g/cm2. Two years later, as she entered perimenopause, it had decreased by 1.5%. Three years after that, it had decreased an additional 5.6%. Wondering what had happened in the intervening years to cause the drop, I figured it out pretty quickly: she had a hysterectomy, sending her into sudden artificial menopause. Fortunately she’s very active, going for long walks multiple times a day, which has probably protected her bones to some degree.

So, what can you do to promote bone health? There are a number of recommendations around the web, including eating eggshells, leaping like fleas, consuming 1200 milligrams of calcium daily, and taking various supplements. The problem with taking supplements is that if you aren’t actively processing the calcium, you’ll just pee it out. The key to finding an exercise that promotes bone growth (or at the very least, preserves the bone you have) involves examining how bones grow in youth: in response to microfractures. This means weight-bearing activity with some active component – running, jumping, jogging, step aerobics. “But running is bad for your knees!” you argue. If you already have knee problems, running may not be the best activity for you; go for a walk instead. However, research shows that ground surface has a significant impact on ground reaction force and the pressure on your joints. Asphalt has basically the least impact absorption, which means every pounding step on a road echoes up through your joints. Running on dirt paths or grass will ease joint pain quite a bit. Additionally, running confers numerous benefits to heart and muscle health, and even gives older runners the energy efficiency of 20-year-olds. If you join a running club, there’s also the benefit of finding new social circles. (Secret: I find running alone really boring, so I always run with friends or in groups!)

The conclusion: running is really great for you. It may be the fundamental human activity, practiced since the dawn of bipedalism. I have yet to attain that “runner’s high” everyone talks about, but I know every time I go out for a run I’m encouraging my osteoblasts to get down to work and give me nice strong legs and tibias identifiable by future bioarchaeologists. (The beastly calf and thigh muscles are also worth it too.) 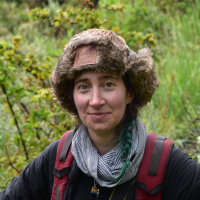 Stacy Hackner is a bioarchaeologist and PhD candidate at University College London. In her rapidly vanishing free time, she engages visitors at UCL’s three small museums and has previously talked at a comedy night for museum professionals.