Gal Science: The Science of B.O.

Last summer, I didn’t wear deodorant for three months straight (note: I was in Paris, and as a California girl, the Parisian summer might as well be winter to me). Before you stop reading and dismiss me as the most disgusting gal scientist to ever exist, hear me out! My fellow scientists and I were curious about what our body odor is, how it works, and why we are so disgusted by something that is, in fact, natural. We all think that body odor comes from sweat, but sweat in its original form is, by and large, odorless. There are millions of tiny bacterial species that reside on the surface of our skin that metabolize, or eat up, the different compounds that make up sweat. These bacteria thrive in warm and humid places, such as our underarms, and some of their metabolic processes create volatile compounds that we can smell: this is what we call body odor.

Some of the bacteria that are known to cause body odor are species within the genera Staphylococcus and Corynebacteria, and these species can be found everywhere on our skin. You can think of the body odor production process as one similar to the fermentation process for beer. Just as some beers smell or taste different from others, so do we smell different from other people. This is because there are small but important differences in the composition of the bacterial species that live on our skin. You might also find that some people (unfairly!) don’t have much body odor at all. Studies have shown that diet, social setting, and the genetic makeup we inherit from our parents can all influence the types of bacteria that live on us.

Think of your body as an ecosystem for the trillions of microorganisms (including bacteria, viruses, and fungi) that live in and on us: a rainforest of organisms. The various microorganisms that live on the surface of our bodies compose what is known as our skin microbiome. While some of these bacteria contain genes that are responsible for the production of body odor, most of them are there to help maintain the delicate balance of the ecosystem that is our skin surface. The skin is the first interface between the outside world and the inside of our bodies, and there is evidence that suggests the bacteria on the surface of our skin are key players in not only protecting us from pathogens and other bad things, but also helping our immune systems ward off bad infections without over-inflammation. Without these bacteria, we would have more severe skin and health problems.

Traditional antiperspirants and deodorants work in two ways. Deodorants are typically alcohol-based, which stimulates sweating, but also kills bacteria. Often deodorants are formulated with other antimicrobials, such as a compound known as triclosan and, more commonly, metals like aluminum, which work to eradicate all the bacteria that is present on the surface that it is applied to. On the other hand, antiperspirants attempt to stop perspiration and therefore lower the amount of moisture on your skin surface, which creates an unhealthy environment for your skin bacteria. These antiperspirants are also typically aluminum-based, and essentially react with the salts in your sweat to make gels that plug up the ducts of your sweat glands.

These strategies for reducing body odor work to destroy everything that is living on the surface of your skin, regardless of whether it is helpful to you or not. As you can probably imagine, this has many negative implications. One solution to the body odor problem that we need to work on is targeting specific genes that are responsible for making those volatile compounds. (Note: the perception of body odor as a social problem may be a recent phenomenon: in a letter to Joséphine, Napoleon Bonaparte requested that she not bathe, since he was on his way home!)

Metabolism is a complex and perplexing process. While we have uncovered large numbers of pathways in various biological systems (see the metabolic map below for a visual expression), we still don’t fully understand how different pathways – different sections of this map – interact with each other and work together. There are countless instances of regulation based on very specific changes in concentrations of very specific components inside and outside the cell.

One aspect of metabolism we do understand quite well, however, is the central dogma of biology. The central dogma is a concept that refers to the basic process of how cells go about their daily activities. It encompasses a host of components and is one of the main activities of a cell. Here is a quick and dirty version of it: first, you start with the basic component of life, a DNA (deoxyribonucleic acid) sequence. DNA sequences in cells are split into genes that each encode for a particular function; several of these genes together create a pathway, and several pathways create networks. During a process known as transcription, DNA is read by a molecule known as RNA Polymerase, which creates strands of mRNA (messenger ribonucleic acid). Oftentimes, it’s easy to think of DNA as a hard drive (which contains information for a long time and doesn’t get changed or deleted often) and RNA as the RAM (memory that is ephemeral). Through a process called translation, a molecule known as a ribosome reads the mRNA and creates proteins (sequences of amino acids). Proteins are the business end of the cellular process; they can fold in various ways and drive reactions in your cell that let the cell go about and do all that it needs to.

So what does all this have to do with body odor? Well, we know that the genes involved in metabolism in the bacteria on our skin surface are the cause of body odor. We also know that because bacteria multiply super fast (much faster than human cells), they tend to make mistakes in copying their genes – just as if you were typing a lot faster than your normal speed, you would make some typos. These mistakes, called mutations, can sometimes lead to the cell creating a protein that isn’t functional.

Imagine such a mutation occurring in an odor-related gene that rendered it non-functional – we would have bacteria but it wouldn’t make us smell bad! Now imagine trying to find this one bacterium that we want to isolate from the billions of bacteria on our skin surface making us smell bad: not so easy.

How to Solve this Needle-in-a-Haystack Puzzle

One idea for isolating these naturally occurring mutants is using a technique known as a CRISPR/Cas system (short for “clustered regularly interspaced short palindromic repeats,” pronounced “crisper-cas”). The CRISPR/Cas system is present in bacterial cells, and is a way to maintain immunity against invading genes from particles such as viruses. Recently, we have started using this system for editing genes by adding, deleting, and changing their DNA sequences. We can do this by using this system to make double-stranded breaks at very specific locations (to the single nucleotide specificity!) in the DNA sequence.

So we can use this tool to make very specific double-stranded cuts in the wild-type, or normal and functional, sequence of any odor-gene we want. By doing so, we can take a population of bacterial species, remove all the functional, odor-causing bacteria (because making such a double stranded cut kills the bacteria in question), and isolate the bacteria that has mutations. Not all the bacteria will mutations will be the ones we want, but by using bioinformatics techniques, we can guess that mutations in some parts of the genes may be better to target than ones. In doing so, we can find the non-smelly mutants!

Once We Find the Mutants, Then What?

You’ve probably heard of probiotics, such as those found in many yogurts, that can help you digest your food better. In a similar fashion, we might be able to find a way to make a cream or deodorant you could apply to your skin. It would allow the natural, non-smelly mutants to live their normal lives on your skin, working with your body instead of against it. Eventually, your native bacteria would take over and you’d start to smell again, but with reapplication (as with any deodorant!), you could theoretically reduce your body odor in a manner that is also body-friendly.

Until we get there, I started using a deodorant called Crystal Essence, which doesn’t contain aluminum-based compounds. The next time you roll on your favorite deodorant, think of the little bacteria you are killing that are just trying to help you out! 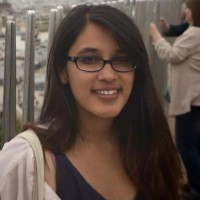 Aakriti Jain is a biologist/bioengineer interested in figuring out how tiny biological systems work with such precision and complexity. Her sense of direction (in life and otherwise) may seem amiss, but she is a firm believer in being lost with confidence!