On Being the Mom of “the Foreign Kid”

Today, my son Indrek was supposed to bring a candle and two hardboiled eggs to school for an art project. In his school planner, he had written “pikk küünal,” which means “long candle,” so I’d bought a long, white taper candle. When I double-checked his school’s messaging system this morning before school, however, the teacher had written that students should bring a “piklik küünal,” which, as far as I know, means “oblong candle.” Shit, I thought to myself. He’s got the wrong thing again. Based on my experience with Estonian schools this year, when the teacher requests something specific, the kids need that exact thing or Indrek will be the only one without it and he will be embarrassed.

Because we are living abroad, my kids have lots of inevitable small embarrassments during the day due to being international students and being out of linguistic and cultural step. Consequently, my husband and I are really conscious of making sure they have the “right” things with them when we can. The thing is, there are so many unarticulated things that cultural insiders just know and that no one thinks to tell you. For example, in the U.S. I would know what the “right” snacks are to send for the school Halloween party, or what the “right” way to dress for picture day is, or what’s the “right” way to go about setting up a playdate between Indrek and one of his friends. I don’t know these kinds of things here.

At almost twelve, Annika is old enough that her friends are pretty conscientious about filling her in on the protocol, and she is even more conscientious about asking, but seven-year-old boys aren’t so good at this kind of thing. I still haven’t heard the end of sending Indrek to school in a slapdash homemade Big Bad Wolf costume (a grey shirt, grey pants, and brown scarf threaded through a belt loop for a tail) on the day that they were supposed to dress up like a character from The Three Little Pigs, only to hear that the other kids had store-bought masks, luxuriously furry tails, and other wondrous costume creations.

Anyway, all of this means that I was determined that Indrek would have the right kind of candle for this art project today, come hell or high water. So on our morning walk to school, I took a route that took us by the only grocery store I knew for sure would be open at 7:30 AM. No oblong candles. I stopped by my parents’ currently unoccupied apartment, also on the way to school, and rifled through their cupboards. No oblong candles. We got to school just in time, only to realize that we’d left Indrek’s backpack in my parents’ apartment. We ran back to the apartment, retrieved the backpack, and arrived at the school about 10 minutes late. I caught the teacher in the hallway just as Indrek’s classmates were on their way to gym class.

“What time is the egg art project?” I asked (in Estonian), breathlessly and probably completely frantically.

“The period after next.”

“Oh, the candle shape doesn’t matter,” the teacher responded, airily. “We just need it for wax. Don’t worry about it. The eggs are the important part. Did he bring his eggs?”

I will remember these things when I am home again. 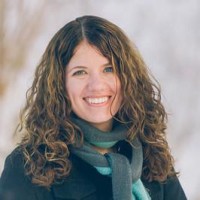 Marika Seigel is the author of The Rhetoric of Pregnancy and Expecting: A Brief History of Pregnancy Advice, both with the University of Chicago Press. She is currently living in Tartu, Estonia with her family, where she teaches at the University of Tartu and blogs about her adventures in language and parenting at fembroad.tumblr.com.