Taking Pleasure in the Sound of Words

My father has an unusual affliction. He doesn’t see it as a problem—he might not even realize he has it. For as long as I can remember, my father has been beset by Spoonerism.

My dictionary defines Spoonerism as “a verbal error in which a speaker accidentally transposes the initial sounds or letters of two or more words, often to humorous effect.” It was named after the Reverend William Archibald Spooner, who was notoriously prone to this type of mistake.

My sister’s husband famously tried to get my father to indulge his Spoonerism by repeating questionable phrases in front of him. For example, he kept saying the name of former Green Bay Packers football player Cletidus Hunt — or worse, the phrase “cunning stunt” — as well as the town where he and my sister attended college, Beaver Falls. Fortunately, it never worked.

I’m not afflicted with Spoonerism, but I have my own habits, my own obsessions when it comes to words and their sounds. I enjoy repeating certain words and phrases, over and over. I love the pronunciations of foreign languages, despite the fact that I’m apparently too lazy to learn them. And I’ve loved poetry ever since college. One of my favorites is Kay Ryan’s poem “On the Difficulty of Drawing Oneself Up,” from The Niagara River:

One does not stack.
It would be like
a mouse on the back
of a mouse
on a mouse’s back.
Courses of mice,
layers of shivers
and whiskers,
a wobbling tower
mouse-wide,
with nothing more
than a mouse inside.

What I love most about this poem is the repetition of the vowel sounds, the consonants, and the motif of the mouse. I also enjoy the almost-repetition of the slant rhymes in “shivers” and “whiskers,” as well as the more subtle pairing of “tower” and “more.”

like a faint purred thrum
of insect wing hit

against draped pane. Let
each own its rhythm,

Try to picture it
as a slattern hemmed

in by a corset,
tempered by wisdom,

As in Ryan’s poem, here again we have a seductive repetition of sounds. The ending consonants of “quiet,” “hit,” “let” and “velvet,” or “am,” “thrum,” “rhythm” and “slim.” Poems like these make me ridiculously happy; I can read them over and over again.

Like many people, I also have a habit of repeating favorite song lyrics over and over in my head—and it’s important to me to get the delivery right. I’ve loved Led Zeppelin ever since I was 12 years old, so when my mind is not otherwise engaged, Zeppelin lyrics pop into my head without fail. Almost every time I see a flock of pigeons or starlings, for example, I think of the line “Into the sun, the south, the north, at last the birds have flown / Shackles of commitment fell in pieces on the ground” from the song “Achilles’ Last Stand.” When I’m alone, I try to capture Robert Plant’s cadence as best I can, even though I can’t sing to save my life.

I’m still fairly puzzled as to why we humans take so much pleasure in the sounds of certain words. And what puzzles me is not the mere fact that we mindlessly regurgitate them, but the intensity and compulsion with which we do it. Dr. Elizabeth Hellmuth Margulis, the director of the Music Cognition Lab at the University of Arkansas, likens repetition in music to the rituals anthropologists are so keen to study. She says that “the repetition of gestures makes it harder and harder to resist imaginatively modelling them, feeling how it might be to move your own hand in the same way.”

Seems to me the desire for repetition is not so much cerebral or rational as it is visceral—a holistic necessity for the human animal. Maybe that’s why our interest in the reverberations of certain sounds is so pervasive. Having words or phrases turn into music engages us on a deep level, stimulating our fascination with ritual. We feel compelled to repeat the sounds we hear and love.

My predilection for the parroting of sounds isn’t limited to human language, either. For as long as I can remember, I’ve been obsessed with birds and birdsong. When I got mononucleosis in the sixth grade and had to stay home for a month, my parents bought me a recording of birds and their calls from the Audubon Society, and I listened to it every day. It filled up most of the day because it had so many birds on it—from the smallest finches at the backyard feeder to the largest seabirds circling the highest cliffs.

It’s been said that “music has charms to soothe the savage breast,” and perhaps the recitation, the repetition of certain sounds is a way for us to self-soothe. As Dr. Margulis also notes, music is loaded with repetition. We intuitively know that familiarity can be calming. That might explain why I kept listening to my birdsong record over and over again when I was at home sick. Not only did I feel terrible, I was also bored and lonesome, and the repitition was familiar, comforting.

Of course, this doesn’t fully explain why, 30 years later, I still feel compelled to imagine a trilling osprey kettling high above a lake, or a white-throated sparrow perched on the highest branch whistling for his mate, or the real Woody Woodpecker cackling away deep in the dense forest. I don’t repeat these calls out loud, but the desire to do so is still there, and it’s irrepressible.

Nor does it explain why I keep writing poems that combine both birds and the repetition of certain sounds, despite the fact that I’ve stopped sending these poems to literary journals. Like this one about starlings:

A starling is a starling is a starling,
with hardly any inkling of distinctness.
Yet this noisy genus nevertheless secures
its own startling niche wending tenuously
through time and space. Watch how these
Lilliputian yard-darlings prod and stab
between spears of starchy grass, each bird
wrapped in an inky fabric through which
little astral pinpricks peek, littering the lawn
with countless automata in an otherwise
aimless chain of phenomena.

In the end, I suppose I don’t really need an explanation for the pleasure I take in certain sounds and certain words. All that matters is the feeling I get from them. Sometimes you hear something and you just know it’s right—it strikes the perfect chord in you, and that’s enough. It’s a good, in and of itself. 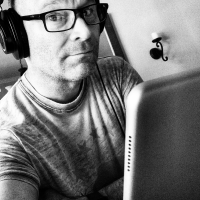 Steve Neumann is a writer whose work has appeared in Salon, Nerve, The Morning News, and other publications. He is a regular contributor at The Good Men Project and blogs at Patheos. Follow him on Twitter.