This Is Only Creepy If You Let It Be Creepy: A Short Story

My ex-neighbor Bill comes over to my place on Thursdays to stare at his ex-wife Janine through my window blinds. There’s a restraining order that says Bill has to stay five hundred feet away from Janine, but he pays me ten bucks an hour because I can get him to thirty feet without anyone knowing shit.

Bill always brings his binoculars and a six-pack of beer. Sometimes we order pizza. Bill sits in my recliner and waits for Janine to walk into her kitchen or den. To the outside world this might seem like a bad deal, to pay to see his ex-wife in such a limited way or some nights not at all, but Bill doesn’t care. He pays me week after week without complaint.

“Lisa,” Bill asked me tonight, “What’s this journal entry mean? The one that says ‘Water Heater’?”

Besides the hourly charge, Bill pays me a few bucks to track Janine’s comings and goings. I jot down whenever Janine gets groceries or works in her garden. Normally it’s easy money, but last week it got complicated. On Saturday, a man named Jeremy stopped over and had sex with Janine. I knew his name was Jeremy because of how loudly and persistently Janine kept screaming it. After they finished screwing, I noticed a truck down the block delivering a water heater to one of my neighbors. I wrote that down in the journal instead of the truth.

Bill was a handy guy. He still did things around the house for Janine when she wasn’t around. Once he climbed over the fence and cut down some tree branches that were getting too close to a power line. Another time, he mixed up some cement and tuckpointed a loose brick on the side of her house.

“I bought that water heater a year ago,” Bill said, “it should still be fine.”

All week I debated whether or not I should tell Bill about Jeremy. I decided against it. I’d seen Bill get angry a couple of times. The last time was right after he and Janine split up. Bill went out into his backyard and picked up a rowboat and hurled it against the side of his garage. Then he took an axe and split the rowboat apart and lit the pieces on fire. Then he stood there and laughed. While he was laughing at his fire some of the flames jumped onto his garage. This was when Bill really started to laugh, louder and louder, cackling while his garage burned to the ground.

Whenever Janine walked into her kitchen, Bill pressed his binoculars to his face. Janine was in her early 40s and she often wore sleeveless shirts or tank tops to show off her lean arms. When Jeremy stopped over last week he kissed Janine on the back of her neck and then the two of them tore off each other’s clothes and fucked on a granite countertop near a fruit basket filled with pears.

“Did she dye her hair?” Bill asked me now, handing me the binoculars.

Janine’s hair had been brown before, but now it was blonde. I guessed it was Jeremy’s influence. I remembered how I’d lost some weight when I started dating my last boyfriend, Aaron, but when we broke up I gained it all back, plus a bunch more.

“She always talked about going blonde,” Bill said. “I’m glad she finally did it.”

Sometimes when Bill was over we’d discuss our relationship troubles, but tonight I didn’t feel like it. Earlier that day, I’d driven by Aaron’s apartment and found he’d moved out.

“Do you know where he went?” I asked Elaine, the apartment manager.

I’d met Elaine before, a couple of times, maybe not during my best moments. The first time I’d met her I’d gotten very drunk and puked up a large amount of Easter ham in the foyer of Aaron’s building. The other time was a couple of days after Aaron and I had split up, when Elaine caught me pouring weed killer inside an enormous heart shaped stencil I’d laid in the grass outside his apartment window.

While Bill was watching Janine, another ex-neighbor of mine, Harley, knocked on my door. Until a few weeks ago, Harley lived across the street with his wife Lily.

“Bill mentioned to me that you let your ex-neighbors hang out at your place so they can be closer to their ex-wives,” he said.

I wasn’t a huge fan of Harley. He was a blowhard and a few years ago he’d made some disparaging remarks about a cheesecake I’d brought to a neighborhood block party. I never understood what Lily saw in him. Lily was neighborly to me, always waving hello whenever she saw me out in my yard.

“I only provide that service for Bill,” I explained to Harley. “He’s the only client I want right now.”

“Please,” Harley pleaded. “I just want to sit here and remember what my life used to be like.”

Lily and Harley’s house had lots of windows and I’d gotten the pleasure of watching their breakup from the comfort of my own bed. The yelling and accusing started in their kitchen. After that things moved into their living room. I made a plate of nachos and sat on my bed as their fight spilled onto their front lawn.

I thought this price might discourage him, but he didn’t flinch.

“Two hours’ worth,” he said, slapping forty bucks down on my dining room table.

I handed Harley an extra pair of my binoculars. Across the street, I saw Lily doing yoga. It looked very exciting to me, her ponytail shifting and bouncing as she stretched, but Harley stifled a yawn.

“I wish I could start over with her,” he said, “but once you’ve ruined something it takes so much energy to fix, you know?”

I knew. Aaron had cheated on me with his boss, a woman fifteen years older than him who’d recently had a hip replaced. I immediately forgave him, told him we could work through it. Unfortunately, Aaron wasn’t looking for forgiveness.

“I told you this wasn’t working,” he said, “and you kept ignoring me so I decided to show you instead.”

While I stood there with Harley, he pulled out his phone to check his messages. Bill never did this. Any time Janine walked into his line of sight, Bill stared at her like nothing else in the world existed.

“This feels even creepier than I thought it would,” Harley said.

“It’s only creepy if you aren’t in love,” I snapped.

While Harley and Bill watched their ex-wives, I went into my laundry room. I’d recently drilled a peephole in the wall by the dryer. When I was feeling especially depressed about Aaron, I liked to go in there and stare at Bill while he stared at Janine. Sometimes when I was feeling especially sad, I turned on my dryer and rubbed myself against its vibration and warmth while studying Bill’s loving and devoted face.

Tonight while I stared at Bill, I saw him get up from his recliner and walk over to the window. At first I thought Bill was trying to get a better view of Janine, but shortly after he stood up he smacked his hand against the window and screamed “Janine!” Then he screamed “No! No! No!” I watched as Bill sprinted down my hall and out my front door. I ran into my living room and saw what he was screaming about – Jeremy was in Janine’s kitchen sucking on her tit.

Bill ran next door and tried to kick in Janine’s door. It took a minute or two for him to knock it down. By then Janine and Jeremy barricaded themselves inside the upstairs bathroom. While Bill rampaged through the house, I heard sirens in the distance. Soon a squad car flew up in front of the house. Then another. I watched as the cops ran inside and wrestled Bill to the ground.

Most of my neighbors, Lily, the Wassersteins, the Driscolls, were standing on their lawns wondering what the hubbub was. Soon Bill was will dragged outside.

“Janine!” Bill yelled as he was shoved into the back of squad car. “Janine! How could you?”

As the cops drove off, I poured myself a gin and tonic. I thought I might commiserate with Harley about Bill, see if he had any good advice about my current situation with Aaron, to see if he wanted to make this time a regular thing, but when I got upstairs Harley was gone. I looked out my front window and saw him talking to Lily. He was standing close to her and he was pointing over at my house and Lily was throwing her head back and laughing. They kept talking and giggling until the streetlights kicked on and then Lily took Harley’s hand in hers and led him up the sidewalk and into the house and I watched her pull down her blinds and spin them tightly shut. 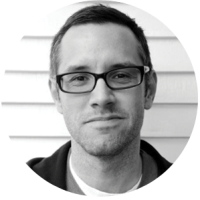 John Jodzio is the author of three short story collections, Get In If You Want To Live, If You Lived Here You’d Already Be Home and the forthcoming Knockout (Soft Skull Press, Spring 2016). His work has been featured in a variety of places including This American Life, McSweeney's, and One Story. He lives in Minneapolis.