It’s 4 a.m. in Zagreb, Croatia, and you’re wide-awake. You and your husband are on your honeymoon. While he sleeps, you admire his black curly hair and thin nose, envious of his ability to rest. As he rotates to his side, you wonder what images are crossing his unconscious and whether he’s ferried a phantom of you into his dreams.

Jet lag has left your body disoriented, so you mime resting poses. You feel like a fatalist lying next to his peaceful body. You’ve read more than once that lost sleep can never be recaptured. This fact concerns you, and you’re almost compelled to wake Marcelo to even the tally. You’re in this together now, and some part of you hopes you die together for the sake of simplicity.

By 5 a.m., you can’t take it anymore. You get up from the bed and drink the bottled water you purchased at Charles de Gaulle airport during your transfer. The mini-bar tempts you, but you’re already dehydrated and Jack Daniels will only worsen your case. You pop a few aspirin, pretending they’re sedatives, but you and sleep continue to skirt each other like foes.

From the floor-to-ceiling windows in your hotel room, periwinkle light begins to seep in. You hear garbage trucks roam and stop on the street below. You welcome the symphony of labor, but know the noise will only prolong your descent into dreams.

Across from your hotel is an imposing building called Institut Français de Zagreb. Next to it is an Adidas boutique, and adjacent is what you presume to be an eyewear shop. The window displays an overexposed photo of an androgynous face sporting hot pink Ray-Bans. The face in the window reminds you of your ex-boyfriend Hiroshi, a model.

While vacationing with Hiroshi once in Barcelona, you recognized his profile on a United Colors of Benetton ad at a train stop. At home in Manhattan, you routinely saw his face—ravine-sharp cheekbones and punk rocker hair—sail by on crosstown buses. At first it was alarming for you to encounter jumbo-sized images of your lover traversing the city, but soon every replica reinforced the magnitude of your connection to him. You’d chosen well and the evidence was pixelated for the public.

That was your life years ago. Your life now feels less exciting. From this vantage point, the past seems like a whirlwind. Although there were plenty of bad times, you pine for billboard illusions over this tethered tiredness.

You wonder if marriage is the last chapter. You’re glad Marcelo’s eyes are shut because you already doubt your union with him. Bringing your left hand to your face, you rub your wedding band and engagement ring over your lips in a rough, unreciprocated kiss.

You squint out the window and hate Croatia. Later in the day, you’ll feel exhausted by the time change, by the rude, old Croats who’ll discriminate against you and your husband because of your dark complexions. You’ll wish you had honeymooned in Bali or New Zealand, or some place farther that you couldn’t afford.

By 6 a.m., you feel landlocked like a mollusk confined inside an unforgiving shell. You’re convinced this predicament is to blame for your short stature and mental straightjacket. For the second time, you consider the private fiesta known as the mini-bar but quickly dismiss the impulse.

In the bathroom, you brush your teeth again in the dark. As you exit, you clumsily bang your leg against the metal trashcan under the sink. You’re sure you’ll wake Marcelo when you scream shit in Spanish, but you don’t. He continues to sleep like he’s been drugged for surgery.

Before you married him, you told Marcelo you’ve never wanted kids. You were dead serious, and you will be until you’re just dead. He said he was fine with that. As you cross the carpet from the bathroom back to the bed, you wish you’d requested a polygraph to confirm his answer and everything else the two of you exchanged with such certainty.

You study the face in the Ray-Ban ad then lie down next to your husband. Faces, you’ve heard, morph. In years to come, people at parties will comment that you and Marcelo look alike, that you resemble two Siamese cats, and a slew of other drunken inanities, none of which are true. On this bed you’re reduced to a bruise of solitude.

You blink sharply at the outline of your suitcases, the desk replete with hotel stationery. Despite the fact that you’ve never drawn with any level of accuracy, you’re compelled to diagram the abrupt shift your life took yesterday—from carefree cartoon to this crushing checkmate. 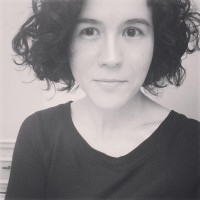