“Who Is Cagney Without Lacey?”: The Fug Girls on Writing as a Duo

The questions inevitably, appropriately, come in pairs: How do two people write a book together? And then, the money shot, with a conspiratorial step forward: Do you think you’ll ever do anything… on your own?  We understand the curiosity: From our site Go Fug Yourself to our three novels, we’ve been writing partners for nearly eleven years — longer than the sum of all Kim Kardashian’s marriages, and three years past what we’ve heard is the recommended life span of your relationship with your hairdresser. It’s natural that people expect one of us will eventually admit we are dying to unfurl solo creative wings that have heretofore been clipped, and that a split is imminent. It is not. Because, to what we’re sure would be the delight of our high-school algebra teachers, we have done the math. We think our particular ones do add up to a stronger two.

“For centuries, the myth of the lone genius has loomed over us, its shadow obscuring the real way creative work gets done,” writes Joshua Wolf Shenk, whose Powers of Two: Seeking the Essence of Innovation in Creative Pairs looks at the success of duos like Marie and Pierre Curie, and Steve Jobs and Steve Wozniak. But science is easier to imagine in collaboration — “Fetch me that test tube,” “What happens if we toss in some hydrogen?” — than writing books. Even TV shows, which have rooms full of writers who break story as a unit, end up dispatching one person to go off and assemble the script and address the group notes. But there’s a pervasive, romantic notion that a true writer is just one person, one dusty garret desk, one keyboard going ignored as he or she stares pensively out the window at falling leaves landing on an empty, swaying tire swing (this is how we assume Nicholas Sparks works). Adding a second person sounds logistically complex: If only one can type at a time, how do those fingers channel two brains? Is one person working while the other yawns and thumb-twiddles and does subtle yoga poses? In other words, to deploy a pun, pairing up on a novel can seem novel to outsiders. (And, yes, the person who wrote that joke in this piece is surprised that the other one didn’t edit it out.)

For us, it feels unnatural not to write as a duo. It’s hard to boil that down to any one quality, or strategy, but a major part of its backbone comes down to a Jedi trick that we refer to as the GFY Mind Meld. We’re not sure how it developed, or when; just that all of a sudden, like Jon Hamm, it arrived and it was undeniable. It explains how — despite us working miles apart, with the Hollywood Hills stretched between us — we sometimes tweet the exact same thing two seconds apart, order shoes online and then find out the other person bought them ten minutes prior, or send each other news articles the other is in the midst of reading. Sometimes, if you’re talking to us in person, we will utter word-for-word the same reaction at the same moment, or our jaws will drop in perfect unison. It’s is our version of psychic twin powers. Not every writing duo has to experience it, but for us it’s a comfort, the surest sign that our brains work in concert. One of us is not arguing to write Sweet Valley High but with Minotaurs; the other is not arguing to pen a slim, stark look at a 60-year old man’s decaying health and existential ennui replete with reflections on flaccidity. Those are fine projects — come to think of it, being a Minotaur would explain a lot about Bruce Patman — but they’re not right for us, and we both know it. Our personalities didn’t naturally crave opposition, and so we didn’t find it. In short: You have to choose your work spouse as carefully as you choose your romantic one. After all, the absolutely fabulous Patsy likely would agree she is less without Edina. They give each other context and clarity, bananas though it may be. Everyone knows The Edina Monsoon Files wouldn’t be as delicious without her blurry, bouffanted collaborator. Who is Cagney without Lacey?  Are you looking for someone who fills in your blanks? Shares your sensibilities? Has the same skills so that you can toss the weight of the world back and forth to each other’s shoulders? Do you both understand why One Tree Hill is super important?

Our partnership is more the latter three, which comes in handy in a micro sense, because writing one book with one voice involves a lot of trust. Most people assume you can just divide the project in half, or each take ownership of specific characters. That might work for a screenplay, or an extremely specific book, but for our three novels – especially our new adult fiction book, The Royal We, which is considerably more complex than the previous two — we both needed a fully fluent, functional knowledge of our characters. All of them. From the mains to the minors, the prince to his bride to their brigade of friends to the flowery biographer. We each had to have an equally proficient ear for their dialogue and understanding of their emotions, so we couldn’t just split the thing in half and then Frankenstein it back together, or else it would be a grotesque and unwieldy monster. Like some of those late seasons of One Tree Hill.

None of that answers the nuts-and-bolts of how, precisely, two people physically write the same novel. And you could ask six different duos and get six different answers. We personally choose to outline rigorously before we begin writing, establishing what plot and emotional beats need to occur in each chapter — a road map that leaves room for improvisation but keeps us from veering too far off course. We’d love to let the characters wander where they may, but practically speaking, it would really jank up the works if one of us handed the book to the other and said, “I had a brain wave, and now Prince William is a psychic werewolf hunter who lives in a cave in Bavaria. Just go with it.” Next, we engage in nature’s most time-honored, mature, and decisive method of deciding who steps up to the laptop first: We flip a coin. (A Windsor Castle one, to be precise.) Winner — or loser? — fires up an empty Word document and starts to type, while the other keeps the home fires burning on the rest of our writing projects (namely, Go Fug Yourself); when the one with the book runs out of gas, she makes notes to explain where she deviated or compressed and why, and then usually finishes a sentence with, “La la la put something brilliant here THANKS.” That gets e-mailed to the other, who reads and edits, rewrites or tweaks, and then adds a whole fresh chunk. Back and forth. In and out. An electronic word tide. Each of our Inboxes returns about 125 emails when we search on the word “draft,” and that doesn’t include the ones we titled “Royal We,” “TA-DA,” “BLARGH,” or, “Here take this I don’t even know anymore.” Google Docs is a no go for us. Nothing fries your confidence like scrolling back up to proof your work, and watching in real-time as the other person is actively hacking it to bits already. We once pasted a short four-paragraph section into Google Drive for speedy approvals, and as one read, the other couldn’t resist typing, ARE YOU ALONE IN THE HOUSE? We would never get any work done that way on the regular.

Achieving a thick skin during that collaborative writing and editing, is, however, a requirement, and is the larger miracle for our pairing — or any, we assume. It must be an egoless tango. It doesn’t matter who lays the last brick of the pyramid, because the ones in the middle that give it structural integrity are as vital as the ones on the outside. We assume the Curies didn’t spend their days dissecting who actually discovered polonium first, and that Marie wasn’t prone to screaming at Pierre, “I coined ‘radioactivity’ and if you don’t agree then you can stick this beaker right up your bearded French behind.’” Likewise, but with less lab equipment and way less impact on human life as we all know it, we came into our business relationship having been close friends for three years and set forth at the outset that our creative progeny would not take precedence. If any decision or circumstance threatened the friendship, we’d grind to a halt and deal with that first. Protect the love first, and the living second. Or, in the immortal words of Kenny Rogers, know when to hold ‘em and know when to fold ‘em.

Having said that, it doesn’t mean we pet each other’s hair and pass out trophies every week just for showing up. We said egoless, not spineless. There are tiny ways in which one person can lead; for example, one might be better at calling a halt to procrastinating, or the other might have a knack for trimming words, divining a character’s outfit from whole cloth, or just walking into the bathroom to think and then returning with a fresh perspective. Maybe one of you hates fonts and formatting (although who among us really hates talking fonts? Please). It’s okay to lobby for that word choice or character twist you believe in, if you think it’s a game-changer and not just editing for the sake of it. And it’s great to recognize individual strengths and weaknesses. Healthy, in fact. But we guard against living by them. We don’t trap each other in those boxes. We give each other room to try and fail and build, because when we both feel safe and comfortable taking risks is when the best stuff flows.

And that’s the true power of being a pair, both professionally and as best friends. We can catch each other, but also boost each other. We’re each other’s safety, and our courage.  And we’re not alone in that. While we could write a book on our own, we actively choose the collaboration instead. We embrace the power of the pair. 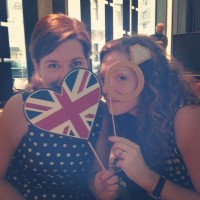 Heather Cocks and Jessica Morgan are the creators of the Internet’s wittiest celebrity fashion blog Go Fug Yourself, which draws millions of eyeballs a month and made Entertainment Weekly’s Must List and the Guardian’s list of 50 Most Powerful Blogs. They are the authors of two young adult fiction novels, Spoiled and Messy, and the adult novel The Royal We. They have contributed to publications ranging from New York magazine to VanityFair.com to InTouch, Cosmopolitan.com, Rolling Stone, and Grazia. They both reside in Los Angeles.