Previously by Evan Fleischer: This Is and Isn’t About the DC Punk Archive

“Edinburgh is a mad god’s dream,” Hugh MacDiarmid’s eponymous poem states (MacDiarmid himself described by Burns Singer as having hair that “curled up … like the grey-brown smoke of a volcano”), a poem amongst many carved into the gray granite of Scotland’s parliament, the entrance to the building that has as its immediate backdrop Arthur’s Seat shooting up green and tall behind it, an unnecessarily giant period stamped at the end of a cobblestone cowpath of a sentence, as if the world’s last medieval monk had wanted to emphasize how thoroughly done he was with writing and illustrating manuscripts after churning out The Book Of Deer, The Book Of Durrow, The Aberdeen Bestiary, and rendering Limmy’s bus capable of flight.

I went to Edinburgh to work on a sketch comedy show with Frances Bell for The Edinburgh Fringe Festival. Frances said hello and Edinburgh said hello with ocean shore glass train station roofs lapping beneath North Bridge, and the laughter of Edinburgh said hello, too, with a back-and-forth set of slowly accelerating ideas pinging back and forth between the two of us — like, What about a sheepdog herding sheep who’re frozen head to hoof in giant blocks of ice? What about a sketch where Bob Dylan’s band is actually infinitely smarter than Dylan? By miles and miles.

I visited Edinburgh in the middle of February partly to start getting a sense of the city and to look at potential theaters and venues in person. Why? Shows are fun. I’m a writer, but I’m very much at home with shows, too. I once saw a theater for sale in Exeter, New Hampshire, a phone number listed on the marquis, and I gave the number a call, hoping I’d be able to buy the theater outright, move in to some sort of loft on the premises somewhere, and spend my non-writing days putting on and facilitating shows. (It was the same theater I’d visited as a teenager when Wesley Clark was running for President and an aide instructed everyone to remove their winter coats because they were also shooting an ad that would air in the South, because that is how you win votes.) Like Camus, I enjoy both the back-and-forth between the adventure of being a writer — Scott of The Blank Page Antarctic — and the camaraderie, solidarity, and community of the stage.

Frances and I walked to Pleasance Courtyard up near what once was the old wall of the city and into one theater there where a rehearsal of some kind was in progress, the sound effects of gunfire and exploding glass standing at stark odds to the distinctly mermaidish stage design. (“Annie Get Your Mermaid,” a distant cousin of The Valley of Gwangi?) Before that, we’d taken the curving stairs and high-ceilinged windows and rooms of Summerhall. A ceilidh was on. We danced. Other dancers locked arms and swooped on over us and the otherwise traditional line of men and women like screaming seaplanes. We danced some more.

Scotland small? Our multiform, our infinite Scotland small?
Only as a patch of hillside may be a cliché corner
To a fool who cries ‘Nothing but heather!’ where in September another
Sitting there and resting and gazing around
Sees not only the heather but blaeberries
With bright green leaves and leaves already turned scarlet,
Hiding ripe blue berries; and amongst the sage-green leaves
Of the bog-myrtle the golden flowers of the tormentil shining;
And on the small bare places, where the little Blackface sheep
Found grazing, milkworts blue as summer skies;
And down in neglected peat-hags, not worked
Within living memory, sphagnum moss in pastel shades
Of yellow, green, and pink; sundew and butterwort
Waiting with wide-open sticky leaves for their tiny winged prey;
And nodding harebells vying in their colour
With the blue butterflies that poise themselves delicately upon them;
And stunted rowans with harsh dry leaves of glorious colour.
‘Nothing but heather!’ –How marvellously descriptive! And incomplete!
–Hugh MacDiarmid, “Scotland Small?”

When Frances and I were visiting two friends of hers at The Ubiquitous Chip in Glasgow, one of them asked me what I thought of Scotland, and I duffed it. I garbled the answer when I wanted to drag a whole proscenium out of me and shove different actors and actresses out onto it — get a lookalike of myself and shove him out into a crowded Edinburgh kitchen with two couches and shagworm lime green chairs, watch him ask everyone to introduce themselves to him all at once, and explain how — even though he’d been in the UK for less than six hours and in the apartment for less than five minutes — someone who wasn’t Frances already knew he was somewhat allergic to eggs and pointed him in the direction of food he could eat. I wanted him to talk about the American-sized bowl of vegetable curry one could slowly spoon one’s way through at Tchai Ovna while working through an amazing cup of Moroccan Apple and Mint tea, or tell them how there was more than one occasion where people in Scotland couldn’t understand his accent; or how he tried to describe an Edinburgh winter sunset as ‘Cuban light having a yawn’; or how — on the way up to Oban — he saw spread out safari branches of seagulls hovering over a full paddock of sheep, and a rainbow dipped into a West Highland loch. Or how he thought of going over to The Scott Monument and recreating the beginning of Wings of Desire, but with Batman looming adventuresomely and sulkily in it, too.

The Fringe Festival was born when eight theatre troupes showed up invited to The Edinburgh Festival in 1947 and put on shows all the same. Cook’s, Moore’s, and Bennett’s was yet to come. Angela Bartie’s book on the subject, The Edinburgh Festivals, describes reactions to the first festival being akin to reactions to the festival today, i.e., as one singer described it: “Plays and ballets by the finest artists were being performed, literally morning, noon, and night, and hospitality was being showered upon guests and visitors….” In Wesley Shrum’s book on the subject, “The dress rehearsal of Michael Green’s Coarse Acting Show in 1977 was stopped by the police when the neighbors complained of noise, so the rehearsal was continued in mime.” When August rolls around, these are some of the things I’m going to be keeping in the back of my mind.

Work on the show continued apace. Sometimes Frances and I would stumble across an actual headshot of an actual academic, dub him “a calcified wizard,” and then find ourselves unable to do anything for hours, as we were crying with laughter (“You’re a calcified wizard, Harry!”). And sometimes idle thoughts occupied us, like, “Do you think we’d be able to get Diefenbaker from Due South for the show? Could we interview him onstage?” Sometimes we read sentences out loud to each other, like this: “The Vegetable Orchestra (also known as Das erste Wiener Gemüseorchester, The First Vienna Vegetable Orchestra or The Vienna Vegetable Orchestra) is an Austrian musical group who use instruments made entirely from fresh vegetables. They are the world’s foremost exponents of this rare genre” and debate for hours about whether or not we should hire them as an in-house salad and/or band.

It wasn’t August yet. Frances and I sat outside The Scottish Parliament. We’d missed First Minister’s Question Time, but that was more than okay, as we would catch up on it later while making dinner. And over a bowl of miso soup crossed with rice crossed with steamed kale crossed with tuna crossed with soy sauce, we mixed together Black Books, Father Ted, Due South, Dara Ó Briain, Look Around You, old episodes of Mystery Science Theater 3000, and someone running around The Ed Sullivan Theater in a full-body green suit liberally distributing baskets full of peas, and tried to eat that, too.

So it wasn’t August, and I was watching Arthur’s Seat. Arthur’s Seat watched back. I looked back to where I’d seen the MacDiarmid etching and turned round again. “Where to next?” Frances said or I said or someone during the last night of the future show at the end of August said, and we started to giggle, potentially even waking the monk, and, the answer — as answers always do — came. 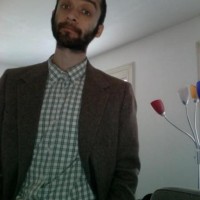 Evan Fleischer lives in Boston, Massachusetts. His writing has appeared in The New York Times, The Washington Post, The Paris Review, and elsewhere.