The Meaning of Literary Pilgrimages

on September 4, 2015 in Literary Pilgrimages

The Toast’s literary pilgrimages archive can be found here.

When you live across the ocean from where your favourite stories are set, Europe can seem nearly as imaginary as Middle Earth. London and Paris are real, but in my mind they exist as an amalgam of stories. Pure text doesn’t provide the sensory cues of visual media, so it demands that readers participate in creating the world of the story. It’s an intimate act of collaboration, a subjective and often meaningful experience, reading a book and imagining its setting.

For bookworms, the only way to bring our experiences with a text into the real world is through a literary pilgrimage. The actual location may never replace the image in a reader’s mind, but the experience in a real space can lend concreteness to the text. After we mentally inhabit a story, does visiting a tangible space feel more real than the story, the inner lives of the characters? Can seeing a writer’s desk give us as much insight into their mind as the words they wrote, even if they haven’t sat at that desk in a hundred years or more? If not — if the places we imagine will always be more vivid than the ones we see and later remember — why are literary pilgrimages so alluring?

I work literary stops into vacations at every opportunity. I’ve been losing myself in books for as long as I can remember (my elementary school nickname was Mr. Frodo), and despite growing up in Canada, I devoured a lot of European literature. A semester studying in England gave me the chance to see locations of significance and relate them to some of my favourite European texts. First I spent four months at Herstmonceux Castle, which Horace Walpole visited before writing The Castle of Otranto. Between the spooky atmosphere and ghostly legends, I was writing Gothic novels in my head; it was even easier than usual to picture myself in the books.

In that mindset, I sought out literary sights at every opportunity. My number one must-see was Paris, as Les Misérables has been one of my favourite books since I was a teenager. Modern Paris is a far cry from Hugo’s vision, but that didn’t stop me from imposing the book on the city. Every time I’ve read Les Mis I’ve had to create 19th-century Paris in my mind, but seeing the actual city lent depth to my mental picture. Nearly all of the locations in Hugo’s sprawling epic are real, but the city has been thoroughly restructured in the years since the novel was written. Nonetheless, I wanted to visit the spot where Javert famously plunged into the Seine between Notre Dame Cathedral and the Palais de Justice. Standing there, I thought, surely I would be able to conjure an image of him in despair, torn between symbolic value systems.

Whether it was because it was nighttime, because Google Maps lies sometimes, or because of my apparent inability to read maps, I never quite found the right spot. The experience remained theoretical, but the night was saved from anticlimax by a much stranger sight. Despite his dedication to accuracy, Hugo seemingly invented the street where Valjean lived. I walked by its approximate location and, glancing down the street, I saw the exact building I’d always imagined. Nothing about it was unique or distinct, but it was exactly what I’d pictured when I read the book. As I got closer I noticed that this building had the same number as Valjean’s home in the novel. Of course, it’s unlikely that Hugo had that specific building in mind when he was writing, but the writer’s intentions pale beside my personal experience with the text.

Reading fiction is always an act of collaboration between the reader and the story, and physical spaces can be read in the same way. These experiences can then become entwined with our ideas of the text itself, enriching our interpretation of it. Hugo wove the symbolism of the Cathedral and the Palais into his novel, but that significance is most apparent to readers who know Paris. And while both buildings have symbolic value on their own, I cast subjective meaning onto a nondescript one because of my love of a story.

Something similar was at play when I visited the Keats House. When I learned that it’s possible to visit the garden where John Keats wrote “Ode to a Nightingale,” I couldn’t book the trip fast enough. It’s been turned into a museum dedicated to the poet who lived there briefly, but the building itself has no inherent meaning; whatever ghosts or echoes of Keats we feel there are projections. The tours are led by docents; ours largely drew anecdotes from Keats’ letters as we walked through the building. The letters you see, like Keats’ poetry, give more insight into his mind, but in his house you can also view a statue that sits at his real height (barely five feet) and the small portrait of Shakespeare he kept for company when he was living away from home.

Such details and tangible realities are like an anchor; they tie the literary pilgrim to their subject by creating a sense that this was a person, not just an author. It’s difficult to separate Keats’ life from his poetry, so bringing the poet to life through his everyday existence enriches your appreciation for his work as well. He and his lover famously wrote each other letters from either side of this duplex, but the walls have been knocked down, so you can practically see Fanny Brawne’s room from Keats’. I stood outside his tiny room, thinking about his horrible death from misdiagnosed consumption and his firm belief that he would quickly be forgotten after his death. It’s easy to imagine the two lovers sending letters, but standing there and seeing how little distance actually separated them made it much clearer and sadder — I unsuccessfully suppressed a sob, worrying the kind old British ladies on the tour.

We fall in love with writers for their works, for their words. The places where they worked and lived act as reminders that they were real, flawed people — they existed outside of their works, and we can love them even more for it. Physical spaces feel authentic; they can’t be manipulated and twisted as easily as language. Yet with the act of preservation comes curation. The literary pilgrim remains removed from the real person, since others have decided how to present the writer’s life. Even Keats’ friends regretted expanding the inscription on his tombstone beyond the simple epitaph that the poet himself requested (Stanley Plumly goes into this at length in his lovely Posthumous Keats). If people who knew Keats found their thoughts of him muddled (and changeable) after his death, readers, from this distance, can’t possibly get a completely authentic view of him, even aided by visiting the place where he lived and imagining his everyday physical reality.

But a biased reading isn’t inherently negative; after all, such adventures are ultimately about the reader more than the writer. The most memorable literary pilgrimages are those undertaken for texts that are most important to us; anything we learn will then be coloured by our pre-existing knowledge and opinions. Further details and experiences can still enrich the text, and we gain better understanding of our relationship to it alongside others on a similar journey.

Other readers and pilgrims also made my experience at Oscar Wilde’s grave more meaningful. I visited Paris only months after the plexiglass shield was erected around the tombstone to protect it from fans’ lipsticked kisses, but naturally people now just kiss and write on the barrier. Messages like “thanks for getting me through high school” and “thanks for giving me the courage to be myself” adorned the glass alongside quotes from Wilde’s works; people had also shoved flowers and multi-page letters under the barrier. His gravestone has become an ever-changing, living monument, and a testament of the profound effect that Wilde’s work and legacy have had on people’s lives. Countless strangers from all over the world have had intimate, personal moments with Wilde through this physical symbol, but they form a collective experience. I may not have learned anything new about Wilde’s life by visiting, but I felt connected to him through others who had made this same pilgrimage and left their mark on it.

Literary pilgrimages offer the opportunity to make reading more social than is usually possible — we watch plays, movies, and television with other people, but we tend to read alone. That means that reading can be a very isolated experience, but still an intimate one, since we create meaning and connection with the text. Our individual histories and biases shape our perceptions of a book or an author, and the literary pilgrimage is another lens that colours our reading. But it’s also a shared experience, with the people who come with us and every other passionate fan who has made (or will make) the same journey.

When readers visit the setting of a favourite novel (whether the actual site, or the inspiration for the novel’s setting), we’re accepting this fictional history as authentic, connected to our real world in some way — and as far as our own experiences go, it is. No matter its real history, a place has the meaning that we give to it, since the experience of a pilgrimage is as subjective as reading the text. When we impose our imaginations on the real world, we’re essentially melding our mental visions with the landscape, creating something that feels more genuine than the literary worlds that have previously existed only in our minds. When we can see, hear, and touch something, it’s much easier to accept that it’s real. We’re drawn to film adaptations of our favourite books for this reason, too — because we can see and hear the characters that had before existed only in our minds. When we make a literary pilgrimage, we’re writing ourselves into the history of a space, one shared with a text, a writer, and countless other pilgrims. While the negotiation between physical and imaginary space is tricky to pin down precisely, literary pilgrimages allow the two spaces to meet, if only briefly, and bring readers a step closer to something they love.

All photos courtesy of the author. 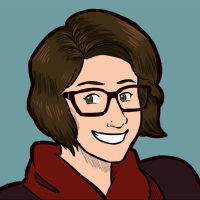 Allison is a writer, comics editor, and dog enthusiast based in Toronto. You can find her on Twitter.