“They didn’t get married after all”: Robert Munsch’s The Paper Bag Princess

Hayley Krischer’s previous work for The Toast can be found here.

The Paper Bag Princess was first told at the Bay Area Childcare Center in Coos Bay Oregon where I had a job in 1973 and 1974. I had been telling lots and lots of dragon stories. They were all fairly regular dragon stories where the prince saves the princess from the dragon.

Here’s the first thing about children’s author Robert Munsch that you should know. He is like F. Scott Fitzgerald and Ted Hughes in that his wife did the creative grunt work for him. But you should also know that Munsch, unlike Hughes and Fitzgerald, is willing to admit this.

The Paper Bag Princess begins with a very typical prince named Ronald and a princess named Elizabeth. “She lived in a castle and had expensive princess clothes,” Munsch writes. When we first meet Elizabeth, she is fawning over Ronald, hearts floating around her head, even though Ronald looks like a blonde version of John McEnroe circa 1977:

Elizabeth is a princess. Okay. Check. At first glance, children might believe this is another book like Pinkalicious, in which a girl turns pink because she ate too many cupcakes, or Fancy Nancy, in which a girl wears “fancy” clothes and uses “fancy” words.

But on the next page, Elizabeth is naked. A dragon smashed her castle, burned up all her clothes, and ran away with her prince.

At this point, one of the other girls in one of those other Pinky books might melt into a puddle of devastation. Not Elizabeth. “Elizabeth decided to chase the dragon and get Ronald back,” Munsch writes.

In many princess books and stories, the plot just happens to the princess. She doesn’t have the opportunity to decide anything. Cinderella is locked in an attic until the Prince can rescue her. Beauty is locked in a house with a Beast until she falls in love. Snow White cleans a dwarf cottage for fun after some vain witch tries to kill her. But on page three of Munsch’s princess tale, Princess Elizabeth takes control of her life. She is fucking pissed. And she is wearing a fucking paper bag because that goddamn dragon destroyed her entire wardrobe.

She marches up to the dragon’s house and bangs on his door. The dragon of this story is also not your typical dragon—he’s sort of cocky, not so aggressive, and actually kind of lazy. “Well, a princess! I love to eat princesses, but I have eaten a whole castle today,” the dragon says, before slamming the door in her face.

Elizabeth doesn’t take no for an answer. She knocks on the door again. It’s a big risk, isn’t it? This little girl in a paper bag up against a fire-breathing dragon.

Elizabeth is unlike other female heroines in children’s books, because she is unashamed and determined in her goal to save Ronald. She confronts the dragon. Elizabeth is, in a way, like Dani, the Mother of Dragons, though Elizabeth is more cunning because she uses the dragon’s own ego against him. She understands the dragon’s sensitive male psyche, and gets him to use up all of his fire until he’s out of smoke. Then she dares the dragon to fly around the world twice in like 30 seconds. Elizabeth plays the dragon, and when she’s done playing him, the dumb, egomaniacal dragon is so tired he falls asleep.

Now Elizabeth can save Ronald! Everything will be right with the world and they’ll live happily ever after.

When Elizabeth rescues him, Ronald is still holding his tennis racquet (because you need to be ready for tennis at all times, even when you’re imprisoned in a dragon’s cave). Ronald, really, is like every man on the Internet. He tells Elizabeth exactly what’s wrong with her despite that she just saved his life—maybe even saved the kingdom.

“Elizabeth, you are a mess! You smell like ashes, your hair is all tangled and you are wearing a dirty old paper bag. Come back when you’re dressed like a real princess.”

Ronald is the original troll. But our girl Elizabeth, she doesn’t take that shit.

“Ronald,” she says, “your clothes are really pretty and your hair is very neat. You look like a real prince, but you are a bum.”

And then Munsch blesses us with this, the last line in the book: “They didn’t get married after all.”

The Paper Bag Princess redefines happily-ever-after endings with this message: You shouldn’t marry a douche like Ronald just because you’re expected to. 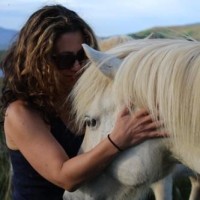 Hayley Krischer is a freelance writer living who lives with her family in the tundra, otherwise known as New Jersey. You can follow her on Twitter @hayleykrischer.