Planting Cherries in the Sand

The world beyond the patio door is a fenced-in patch of baked earth with a sandbox made of railroad ties wedged into the back corner. The sun-bleached sky is an overexposed Polaroid. You are four years old. You run barefoot through the grassless yard while your mother slouches on the sofa inside the house, her glazed eyes staring at a fireplace that has never been lit.

A fireplace in Phoenix is absurd. Your mother has told you so. She grumbles about the fireplace to your grandmother, who telephones from North Dakota every day. North Dakota is where you and your brother were born. Your brother is still a red-faced baby who can’t tell night from day.

In Phoenix, owning a fireplace is absurd and owning a Saint Bernard is abusive. Your mother has told you this as well. The people next door own a Saint Bernard. He barks and barks, the way your brother cries and cries. Your mother might be happy again if it weren’t for the Saint Bernard. She is angry at the neighbors for exiling the dog to the desert and abandoning him while they are at work.

Your father has poured new sand into the box made of railroad ties. Mornings, beneath the fence’s shadow, you rake your fingertips through the cool sand and inhale its earthy scent. At the base of the fence, you discover a small opening. Day by day the opening grows. Soon there is a hole larger than your fist.

You carry a Dixie cup filled with cherry pits to the sandbox one morning. You plunge your hands deep into the sand, digging trenches for your seeds. You will plant your mother a cherry orchard, a sanctuary of shade and sweetness.

Across the fence, metal jingles against metal. A huffing sound makes your heart throb with fearful longing. As you scoop away sand to expose the hole, the Saint Bernard burrows his leathery snout into the void. His nostrils pulse. You lay your hand atop his muzzle. It is the first time you have touched a dog’s nose, and you are surprised by its wetness. You pat the freckled coat above the nose. The dog’s mouth drops open, the pink tip of his tongue protruding between his teeth. You lower your hand, ogling his fangs, and he tastes your palm.

You linger there after the dog has wandered away. Sunlight angles into the hole, and you cover it again to prevent its detection. You will not tell your mother about the Saint Bernard, but you will remember him years later as your children bury themselves in sand at a beach far from home, in a place where you have come to live. 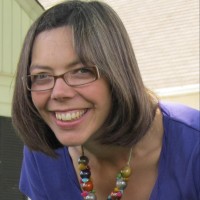 Kim Kankiewicz writes essays and articles for publications including The Washington Post, McSweeney's Internet Tendency, Pacific Standard and Full Grown People. She lives near Seattle and is a co-founder of the literary arts organization Eastside Writes. Follow her on Twitter: @kimprobable