Feel free to ask Aunt Acid a variety of questions at advice@the-toast.net at any time. Previous installments can be found here.

I have quite a lot of creative and artistic friends, working in various bits of fashion and art and culture and design. I don’t have such a job — I work in a mildly interesting, stable office job in a sector that is interesting and fun for me.

Sometimes my friends are going through a bad time with their jobs — they’ve changed jobs and it’s not going well, or they’re struggling to meet their sales targets or they didn’t get the place in the exhibition they wanted. Normal things for people working those kinds of jobs I guess?

Obviously I try and be sympathetic and empathetic whenever I hear about these things but sometimes I don’t know how big a deal to make of it or exactly what the right things to say are?

My career flow is boring and stable and I don’t have the same jumble of big wins and backslides that a lot of my friends do. When those friends who work similar jobs to me have issues I know the dynamics and what to say and find it a bit easier.

What’s the best way of being sympathetic and supportive to people that I care about but whose work lives I don’t really understand properly?

You, STS, are the 20th century trying to understand the 21st. Yes, you are the not-so-recent shimmering past, when a “mildly interesting, stable office job” was something to which most white-collar workers could aspire. Have you been at the same place for more than three consecutive years? Have you risen in the ranks without undue drama or numerous horizontal jumps from one ladder to another? My God, do you have a pension to look forward to?

Please let me buy you a coffee and you can tell me how you did it.

OK, I understand that you have a problem. Or you think you do. You are somewhat mystified by and yet want to be able to empathize with today’s ruffians, we who flit from gig to gig because either we are free-spirited entrepreneurial creatives (self-starters) or self-centered, solipsistic commitment-phobes (snowflakes), depending on whom you ask.

Your friends are the bohemians of whom Dorothy Parker once wrote, “Authors and actors and artists and such / Never know nothing, and never know much,” the hip, once fringe-y types who have become, to some degree, the norm — at least in cities like New York, populating myriad cultural properties from “Girls” to the brilliant new novel A Little Life. Viz:

Art was something that was just an accessory to a lifestyle. You painted or sculpted or made crappy installation pieces because it justified a wardrobe of washed-soft T-shirts and dirty jeans and a diet of ironic cheap American beers and ironic expensive hand-rolled American cigarettes. …

These were the days of self-fulfillment, where settling for something that was not quite your first choice of a life seemed weak-willed and ignoble. Somewhere, surrendering to what seemed to be your fate had changed from being dignified to being a sign of your own cowardice. There were times when the pressure to achieve happiness felt almost oppressive, as if happiness were something that everyone should and could attain, and that any sort of compromise in its pursuit was somehow your fault.

As Dorothy Parker concluded three-quarters of a century ago about a problem that has only worsened with time, “God, for a man who solicits insurance!”

What are your obligations to the freelancers and the fashionistas, the baristas and the bartenders to whom you find it difficult to relate? Why, very little. You are probably doing already everything they, or anyone could, expect of you. Do you listen to their stories and occasionally say “Wow”? Do you sympathize when they encounter adversity and cheer them on when they overcome it? Can you share in the bitter, bursting fruits of their outrage even when you find it mystifying? Then you are being a Good Friend. Really, I promise. You are exemplary.

We do not need to fully understand each other’s worlds, to speak each other’s jargon and breathe each other’s air, to support one another. My best friend runs marathons for fun; she even pays for the privilege. For these and other habits, I think she’s battier than a dugout, and she, of course, thinks I am, for other reasons that she can disclose when she has an advice column. Nonetheless, we love each other like dragons.

Your friends, at least your close friends, probably love you like dragons too, regardless of the occasional blunder you may experience when discussing things about which you cannot be expected to know much. To anyone but an asshole, good-faith effort excuses awkwardness. Especially if you own your awkwardness and say you’re aware of it and are doing your best.

Ask questions when you need to. Tell them, “That sounds rough,” when something does. That’s all there is to it.

One last thought. When I start fixating on whether I am being a Good Enough Friend to somebody or other, it is often a sign that I am, perversely, hurt that said person is not being a very good friend to me. My mind has a tendency to take my disappointment in another person and twist it around into anxiety directed at myself, since that is an emotion with which I am both more familiar and more comfortable.

If you are like me in this, allow me to suggest that what lies behind your question is not a fear that you are not being a Good Enough Friend, but rather sadness that somebody or other is not being a Good Enough Friend to you. I hope, for example, that when you refer to your work situation as “boring,” it is not because one of your artistic companions has dared to suggest as much. Stability in a job is in fact 1) enviable, 2) what makes the world go round, and 3) in any event, your choice, and worthy of respect.

I hope that the self-starter / snowflakes in your circle put as much effort into saying “Wow” to your stories as you do to theirs, and that they also make you feel listened to, sympathized with, and valued. If they don’t, please call them on their bullshit. They will be the better for it — as individuals and as friends.

The role of Aunt Acid is played by Brooklyn-based know-it-all Ester Bloom. 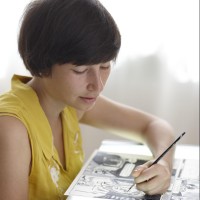 Liana Finck's first graphic novel, A Bintel Brief, was published by Ecco Press. Her cartoons and comics appear in The New Yorker, The Toast, The Forward, and Lilith Magazine.