The Years That Answer: On Christianity and Coming Out

The three years I’ve lived out of the closet have all been question years. I’ve marked them with my own rituals: around March first, my “official” gayversary, I reread The Miseducation of Cameron Post, which wasn’t my first gay book, but rather the first gay book I read after I started to believe I could be gay. March first is an approximation, of course, extrapolated after the fact. I didn’t start telling people until later, but coming out to myself has been the longest and hardest part of this process, and so it’s the milestone I mark. Making one’s own rituals carries a certain power, and mine have helped me take ownership of the person I’m becoming. The shadow side of that act of creation, though, lies in the recognition of the rituals I no longer own, either because I’ve left them behind, or they’ve left me.

I haven’t gone to church regularly for many months now; I’ve lost count of how many. For me, this has meant a profound departure from my life as I lived it before. It took me a long time to admit that I hadn’t just stopped going because I wanted to sleep in, to acknowledge that I just didn’t want to. It took even longer to figure out why.

I thought I’d done my wrestling with church and was settled in for the long haul. Raised in a conservative version of Christianity, in the first half of my 20s I discovered feminism, chafed against my church’s lack of female leadership, burned myself out getting involved so that I could change things from the inside. I walked away when I couldn’t stay any longer, found a home in a more progressive version of Christianity. I thought I was settled there, until well after I’d come out. I thought that if I was going to reach a breaking point with organized Christianity, it would have happened already. It turns out that I didn’t know what a breaking point looked like.

One of my breaking points looked like this: last March I found out that World Vision, a nondenominational Christian charity, had changed its hiring policy to allow for the employment of married gay people. Less than twenty-four hours later, they reversed the policy after thousands of conservative evangelicals pulled their donations.

I’d been participating in World Vision events since high school, and I’d sponsored two children since college. It hadn’t occurred to me that coming out would have any effect on that corner of my life. When the news about the controversy broke, I realized that on some level I’d assumed I could still be part of that community, and my sense of betrayal was no less devastating for the accompanying feeling that I should have known better.

It was spring break, and I was supposed to be studying for my PhD qualifying exam. I spent that day reading blog posts and comment threads and pacing my room. I remember thinking at one point, what did I do to these people to make them hate me so much? In the afternoon I forced myself to go out for coffee and tried to read about sixteenth-century Calvinism. Not much registered.

I haven’t dropped my World Vision sponsorships. That feels like the wrong decision a lot of the time, and I wonder what it says about my integrity, but I don’t know what else to do.

I started reading ex-fundamentalist bloggers because I’m fascinated by some of the more extreme forms that Christianity takes in this country, but their words have proved more applicable to my situation than I might have thought. They’ve taught me that Christianity is about language and culture as much as doctrine and belief. It’s the language and culture that have tripped me up lately, kept me out of the pews on Sunday. Code-switching feels too painful right now, and I’ve worked too hard to come to a place where I can allow myself to take care of my own needs first.

I thought that staying within the world of progressive Christianity would solve all of my problems, but my priorities have shifted so radically that now they fail to align with those even of many progressive Christians. I understand, and can even sympathize with, the desire to build churches where conservative Christians can sit down at the table with progressive ones. I understand the impulse to look at the “big picture,” to mark out a space for areas of disagreement and label those “non-essential.” For me, though, the stakes are different, and I’m not willing to risk my mental and emotional health in order to sit at the same table with people who would make my personhood a subject of debate. I used to see beauty and possibility in the idea of adiaphora: now I see a church that I can’t trust to have my back.

I mark the day that I came out to myself because it took 26 years to even get to that point, because it’s taken most of the last three to convince myself that I can still have a normal life and be happy. It’s hard to tell yourself a new story when you’ve only ever been told the same one.

“When I was straight…”

“You were never straight.”

My friend and I were sitting on his couch, drunk on rum. We’d almost finished the first semester of our second year of grad school, and I’d come over to celebrate. We’d watched Bridesmaids, then started a second movie we wouldn’t finish. I was still in that stage where thinking of myself as gay felt new and surreal: I’d be walking somewhere, or half-asleep, and I’d think I’m gay? How did that happen?

I don’t remember what I was telling him about when I was straight. I hadn’t meant to say it that way, but my tipsy, tired brain couldn’t handle the complexity of before and after, of what being out meant or didn’t mean about who I’d been.

I sat there, on a couch in a studio apartment in the Berkeley hills, and thought, I was never straight. It felt so good to hear those words, to hear someone I trusted validate the past I hadn’t known was mine to claim.

You were never straight.

The first six months of my coming out were euphoric, and then the anxiety set in. For a while I thought that I must be doing something wrong, because wasn’t it supposed to get better? I even wondered, in my lowest moments, if maybe I wasn’t gay after all, if I’d screwed up my life for no reason.

It took maybe another six months to dig down to the roots of what was bothering me, to see the half-submerged stories emerging from that place my conscious mind couldn’t reach easily, the place where I’d also once buried any knowledge that I might not be straight. “Internalized homophobia” sounds like an academic buzzword, but it’s real and crippling and learning to name it saved me. I tried to bring all of that stuff to the surface, the ugly feelings about what I was and the kind of life I could have. I let myself grieve for the person I’d been, the person who knew what her future was supposed to look like, who felt safe within the narrative she’d been given.

Sometimes I think that walking away entirely would be easier, but that’s not where I am either. When people ask about me and church, I say “Jesus and I are taking some time, seeing other people,” or “it’s complicated.”

It’s been liberating to allow myself the possibility of leaving. I tell myself that it wouldn’t change the fact that churches hold some of my most treasured memories: conversations over candles and thuribles, in pews and sacristies, standing around altars laughing and eating leftover bread. The body of Christ, broken for you.

“Gillian, the blood of Christ, shed for you for the forgiveness of sins.”

I tipped the base of the chalice towards me and sipped, kneeling on familiar blue carpet. Christmas Eve, the second Christmas after I’d been out. The year before, I’d walked into church hyper-aware of what the people there didn’t know about me and my life, feeling the weight of their gazes, seeing what they expected to see.

Now, as I heard the pastor say my name, I had to blink back tears. I murmured “amen,” took my sip, crossed myself. I filed back into the pew with my family, sitting a little too close to each other in the Christmas-full sanctuary. I don’t remember if I bowed my head for a moment of silent prayer, the way you’re supposed to after receiving communion, or if I just took out my hymnal and kept singing.

What I do remember is that moment of connection, the intimacy of hearing myself named in a place where I wasn’t sure if I still belonged. I remember thinking, there’s something here that’s bigger than both of us.

I still believe in that something, but I know that it exists outside of churches too. I’ve kept one foot planted in Christianity, but only in the out-of-the-way corners where I still feel safe. Those corners are mostly queer, because other queer Christians understand better than anyone what it’s like to carry both of those words and feel torn to pieces by what they might or might not mean together, to not know how to leave and not know how to stay. I said to a friend once, “I don’t want to feed the narrative that says you can’t be gay and Christian, even though I’m not sure that I can be, right now.”

I look at the word “Christian” in my OkCupid profile and I see all of the other words attached to it, and it feels wrong to leave it there but it would feel like a lie to erase it. I’d be pretending that I was never that girl who loved theological in-jokes and church supply catalogs and drew diagrams of the trinity on napkins, even if I’m no longer that girl. Christianity is my hometown: even if I do leave, it will always be the place I come from.

I am still waiting for the years that answer, if they ever come. When I started to write these words, I wasn’t sure if I was ready for them, or ready to put them out into the world. But I thought about the village it took to get me to this point, and some of those people are strangers on the internet who shared their stories and made me feel less alone. So I write this in the hope that someone else out there needs it as much as I do.

Maybe there are no answer years, or maybe the answers are only ever temporary. I might go back to church, but not this year; I might go back next Sunday, or never. This year, as I attempt to draw a map of the wilderness, the blank space into which I’ve stepped, I ask, Is this temporary? Or is it just where I live now? The person I used to be might have held out eschatological hope, might have believed that the arc of my life would curve back towards home. I’m not sure if I believe that, or if I even want to. 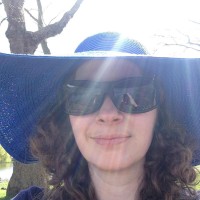 Gillian Chisom is a PhD candidate in history at UC Berkeley. She likes to read witch trials and make her own clothes.