I. TAKE THE MONEY AND RUN

When I am driving across the desert at 85 miles per hour just after sunup, moving back from Iowa channeling my mother’s father who died on the job trucking liquid nitrogen in three-day stretches around the country I am thinking about how perhaps the most subversive thing a female can do is travel alone.

In the past year, during which I have I have lived in five different cities in three different countries, I have worked as test question writer, journalist, driver and surly program coordinator (during which I planned a trip to San Francisco for fifteen visiting international writers in Iowa City with zero experience), salon receptionist, farmhand, art model, cabinetmaker’s assistant, web editor, and English teacher.

When I say I am good at quitting jobs I don’t mean to imply that you are not — the escape from wage labor is not a zero-sum equation. I mean rather that there is precedent.

The dream of working in public without a man coming and sitting across from you when there is a whole room of empty tables and saying, “You don’t mind, do you?” flourishes. When I say, “It doesn’t matter if I do,” he says, “We just want to be able to plug in” and continues to leer down my tank top. I get up and move.

Editing is my least-hated and best-waged labor. There is a very specific satisfaction I derive from putting things in their “right” places, and I prefer working for people whose work I care about who I’m actually invested in.

Someone is asking for language for care labor that isn’t the language of finance, and I am wondering if perhaps finance didn’t steal the language from the social body instead of the other way around.

When my parents met, my dad was living out of his car and working as a dishwasher and bike mechanic. My mom was living at home and working for her stepdad in his small advertising agency. My mom had been accepted to UC Santa Cruz but had me instead. When her mom threw her out when she got pregnant, she was like, “Yo, we need a place to live.”

When people ask what I do, I tell them first that I’m a poet. I like the confusion that not identifying with my wage labor creates in my small town. If they press it, I tell them that I teach English over Skype—which doesn’t pay well, but I can do anywhere—and do some cabinetry work, and about how sanding and puttying and assembly are not so unlike writing; you’re building.

The other night, my stepdad came out as against primitive accumulation when he started explaining how frustrated he gets when he has to work for people who don’t produce anything. “He’s just moving money to make money,” the carpenter bellows, and soon all three of us are shaking at the dinner table.

When I was growing up, my mom watched children and cleaned houses. Sometimes the men would ask her to clean their showers naked. I did my homework—and, during the year I was homeschooled, for which I would be mercilessly bullied when I returned to the public K-8 school of three hundred kids of mostly psychedelic dropouts, all of my work—on the white carpet of other people’s houses.

“Neither the wage system nor the institution of the family is able to meet the needs of those individuals whose forms of productivity and intimacy do not line up with such restrictive institutions of social cooperation and economic distribution.” –Kathi Weeks, The Problem With Work

For a while, I think this is around when he tried to convince my mom that the three of us should move to Sweden so he could be with his lover that I didn’t find out about until I was 20, my dad commuted three hours to Ventura to work in the boatyard off and on. He worked briefly in the True Value hardware store, then finally got a job at National Reso-phonic Guitars, but when they told him he was going to have to increase from four days a week to five he flipped out and they fired him for insubordination.

“It’s hell to be poor, Maya,” my mom still always tells me, just in case I got too many lofty ideas in graduate school, like, I have never hated going to any class as much as I hate going to work.

“The financial crisis illustrated at a macro-social level (for example, in the conflicts between eurozone countries) what a neoliberal meritocracy does to people. Solidarity becomes an expensive luxury and makes way for temporary alliances, the main preoccupation always being to extract more profit from the situation than your competition. Social ties with colleagues weaken, as does emotional commitment to the enterprise or organisation.” –Paul Verhaeghe, Neoliberalism has brought out the worst in us, The Guardian, September 29, 2014

Insubordination: to participate in waves each more militant and coercive than the previous. To send the watch running; to participate in riots for Christmas; to call upon Twitter for the insurrectionary news feed at the receptionist’s desk; to write poems on the job; to wish, “Happy birthday, I hope you’re getting extra-smashy today”; to use the University library to look up a manual to sabotage the machine.

Sometimes I feel like even the misfits don’t like me. Not hate, because that would require too much energy. Just a total lack of interest.

One evening when I am talking with Cassandra she says she wishes every man on Earth would be replaced by a Saint Bernard. This makes me happy.

Dreaming of a life in which the vast majority of my friendships are not long-distance.

Make an offering of skullcap to the gods or the summer owls may it please them such that they guide me through another night. The constancy of the February sun is terrifying. It’s the wrong time of year for mosquitos, grey whales, monarchs; the wrong place for West Nile, lightning, humidity.

I didn’t mind art modeling too much because it was basically getting paid to meditate except when frat boys in Elements of Art would talk through class over the teacher and everyone’s drawings would have to contain my directed glare, if they got to my face.

Jackie Wang: “Slow love is not something I know but perhaps could learn.”

I try not to freak out when the person whose arms I imagine around me when I can’t sleep, who has said some of my favorite things, like “Rules are made by people. I’m a person” and “You don’t owe him anything,” doesn’t text me back and accept his explanation of being too much of a black hole—

If I’m good at leaving, I’m also good at coming back. When the test-question-writing work dried up and I ran out of ideas for articles and the farm paid me only in vegetables and the salon was too toxic (I cut my own hair anyway, and besides I have yet to even put on makeup in 2015) and the International Writing Program ended with the semester I turned over my lease to a friend, packed up my car, and blasted back to the land of my birth, where I know all the smells to a point of claustrophobia.

My dad, who now gets by on Disability, is volunteering at a nursery that supports people with mental illness. The last time I saw him he was keen to agree that Reagan-era policies or World War II social trauma or capitalism or all the reasons I wasn’t allowed to watch Disney movies as a kid were certainly responsible for the U.S. depression epidemic.

Home is chopping firewood in my living room; boiling water on the wood stove; spitting in the dark; peeing in the dirt; peeing beside the water tank. Polystyrene confetti, ghost net, the material wedge of this atomic world that we’ve decided to live in

BUT WHAT DO YOU LOVE? 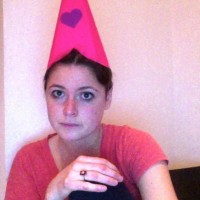 Maya Weeks is a poet, artist, and amateur oceanographer from California. She is currently at work on a book about trash in the ocean, Left Out In Weather (leftoutinweather.tumblr.com).