The knot descends on the pit of my stomach when I cross the Potomac, tightening as I make my way south. I barely notice Virginia. North Carolina greets me with tobacco farms, their large green leaves rolling out before me for acres. They die a bit each year, a cancer wrought on the terrain. I pass the pig trucks on the highway, their cargo tainted with purple blotches, bound for the slaughterhouse. I meet the Cape Fear River and let it lead me home to the place where the river meets the ocean and gives birth to estuaries teeming with life sprung from the cold mud. But the springs of water had become blood.

My friends’ voices used to blend together. We were a piece of something clear and true, gathered over six thousand strong, cascading through the arena united in song. Back home we were separate, small churches dotting the North Carolina coastal plain. But for one weekend, the youth converged on Fayetteville to form the Body of Christ in which we could do all things. Yearly, we called for rain to flow through our bodies in the form of snaps and claps, transforming into Jesus’s live, pulsating heart—our songs rising up to the heavens. We were cemented together by proximity, time, and the fear of God Himself.

Amendment One wasn’t on the ballot until May, but the churches had been on the warpath long before. For weeks the church down the street had been supporting its passage on its sign out front, half hidden by overgrown weeds and rust. Later that summer the sign was changed to read “Eat more chick’n.” We preferred passivity. “I’m not gonna ask you how you voted,” my preacher proclaimed from the pulpit five days after the amendment was passed by a thirty-point margin. I didn’t look over to meet the eyes of the sole gay couple and their sons seated in the next pew over, knowing full well that most of our congregation had been complicit in codifying our state’s hatred of them. We had begun to shatter the Body bit by bit.

When I was fourteen I would sometimes consider asking my best friend to kiss me, you know, just for practice until we found boys who actually wanted to kiss us. We could snuggle up to each other on the couch like we always did, only this time not stopping until our lips were separated only by breath, pausing for a moment to smile and appreciate it. It would be no big deal. We could discover together what the sensation of lips on lips felt like and be all the closer for it. I never got the courage to ask. She soon got a boyfriend and nothing was ever quite right again. I loved her by other names: other half, best friend, soul mate. It took me several years to figure out that she didn’t use these words in the way I did.

My God filled the heavens and the earth. My God was the lake that engulfed me in coolness even when the three month long drought left only a trickle in the creek. My God was the dab of sweetness that graced my tongue after being coaxed from the center of a honeysuckle. My God lived in the pine sap that dipped down the trunk, pooling in the base of the tree amongst the fallen pine needles until thick and gooey, sticking to the soles of my bare feet. My mama would scold me when I tracked it on to her clean floor, sending me back out to the yard. I would try to scrub the sap from my feet, never quite getting it all off.

Though we had been scattered from there all over the earth, my childhood friends always fell back into our high school routine whenever we arrived home from school, milling around the town waiting for someone to organize us back into formation. We eventually ended up in Elena’s backyard, huddled around a fire pit. That night we moved around the fire with the wind, switching spots, sitting on each other’s laps, trying to stay ahead of the smoke. Cuddled on the towels in the dust from which we were formed, they traded stories of hookups and mistakes made in the name of collegiate adventure. “I like to keep things private,” I repeated when they pressed.

It was nothing. It was everything. I couldn’t say these things.

But everyone’s world crumbles at the edges every once in a while.

“I’m not sure I can believe in God anymore,” I said, sobbing so uncontrollably he couldn’t understand me. The preacher comforted me until he was satisfied that I had been reassured, both numb from the February wind. But as he spoke, my god had been washed out of me and swept out to the sea by the waves at my feet.

But I couldn’t say these things.

Instead I left. I fled until my feet were stinging from the hot pavement instead of sinking into the gritty sand and the fresh saltiness of the ocean air made way for the metallic scent of bus seats. In exile, there were no people around who had been taught by my mama or voted for my daddy or sat beside my grandma at the early service. In exile, there was no one who grew up relying on song to learn scripture. In exile, there were no hushpuppies fried by people with big smiles and slight drawls. In exile, at least, I thought no one could see my shame.

It took almost a week for the bruises to completely disappear; the yellow patches traipsed up and down my torso, evidence of where I had allowed fingers and lips to roam. I swore it would be the last time. It’s always the same story. One minute I was drunkenly chattering at some guy who mistakes this for interest, all the while playing the is-she-straight guessing game with the tiny blonde perched prettily on the ratted-up couch. The next minute my body was being hungrily pawed at by said guy whose name I didn’t care enough to note. I had no serious objections and, besides, it was more interesting to hook up than to skip out. There might be numbers exchanged, there might be promises to call, though in the clarity of daylight and sobriety I’ve never done anything of the sort. I’ve heard that doing the same thing over and over again and expecting a different result is called insanity. I called it hope; a prayer that queerness was a fluke and a fear that this might be the prayer god chose to make an appearance for.

The ruling came down on a warm Friday afternoon in October following a day of calls to the Register of Deeds and nervously tapping any hard surface my fingertips landed on. North Carolina had been forced by the sheer will of the courts to grant me some of the humanity that they had stripped from me. It wasn’t until the enormity of regaining it sucker-punched me in the Walmart frozen food aisle that I realized that I’d been missing it in the first place. I called my friends hoping that one of them would understand. They couldn’t.

I was nineteen and surrounded by rainbow banners. I heard the hymns of my past raised up not to the god of my childhood, but to something higher that I couldn’t quite reach, a pride forged in the wake of violence and hate and had emerged pure. For love is as strong as death, unyielding as the grave.

“Just a few years ago, we couldn’t walk outside during the day,” a trans woman said to the crowd.

“I wear this rainbow stole as a visible sign that this is who I am to be,” said the former Methodist preacher who loved his son more than his post. The shame rose to my cheeks, hot and red. Sometimes I forget those aren’t my people anymore and their doing is not my doing.

Many waters cannot quench love. Rivers cannot sweep it away.

An aisle over is a little girl seated between two men, holding both of their hands and leaning on one’s arm. I watch the girl in the midst of her contentment until she catches my gaze and smiles. For a moment I can feel the god of my childhood. I weep into my hands, the salt water flowing out between my fingers.

Even with the edges gone, the world is still there. 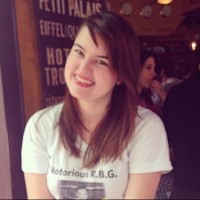 K. DeHart is a college student from North Carolina. She is currently studying in Washington, D.C. This is her first publication.