Bodies Without Malice: A Short Story

The therapist looked disgusted when I told her Quentin’s idea of foreplay was an erection against my leg. I felt vindicated. Even she was repulsed by my husband. Our magnetic fields repelled each other on the loveseat.

“Thanks for that,” Quentin said in the car.

“Did you see the look she gave me?”

I wondered what he expected after all this time.

“I forget what it’s like to be held,” I said, then waited for a response.

He kept driving. The rain splintered out on the windshield. He knew the best ways home. He took the car in and I can’t do that by myself. My continued dependence was not convenient until I tallied everything. The therapist knows something that we don’t, but she’s beyond bribery. She wants us to make boundaries, expect them to be broken, and then forgive. Both of us are exhausted, beyond the parameters, overlapping each other’s miseries. Forgetting whose is whose.

She told us something was missing. In this particular session she had asked if we were making love. Quentin laughed, uncomfortable at the thought.

“I don’t want him to touch me,” I said, only after, realizing how prudish I sounded. “I don’t want to be touched.”

He used to drive differently, now he held the steering wheel with a lazy wrist. He had become careless. Standing next to one another used to be a dance. Once I showed him a magazine, people were naked on the cover, wrapped in Saran Wrap with soap and water between them. They made a pool between their bodies. He saw my fingers scan the cover and that night we stood naked, bound in plastic wrap. Our faces burned with light.

“If we can stay like this for an hour…”

“Let’s waddle.” He pointed his lips to the bathroom.

Falling, laughing hysterically, I pissed myself and him. Disgusted with ourselves and closer, we kissed. There had been nothing more visceral for me, and when he ripped us apart from our binding, I felt more in love. We cleaned ourselves in the shower. When he stepped out, my skin turned yellow and blotched and my hands shook. Much of my life has been this way. Joyous and then weak and shaken by something I don’t know. Quentin saw my face and it was decided I needed a doctor.

The bridge was high and the Fraser River was far down and snot green. There was no music, or anything new outside, and the silence was too much. I had been cheating on my husband, and he’d saved me from squalor. He let me go with him. It was almost as bad as being snuck in his luggage. We shared a single bed, and neither of us ate.

“We’re not kids anymore,” he said. “We’ve been through it, Beverly.”

Last night I was rocking myself at the kitchen table. Quentin pulled me hard from my seat. My arms were dislocating until he let go. He was slobbering and his nose was dripping. I told him I was sorry.

I didn’t find myself profoundly alone in marriage while he was next to me breathing or eating or snoring. I wasn’t lonely; I was contented. Quentin wasn’t boring, I was the boring one.

I started talking to myself under my breath. Sometimes he’d catch my mumbles and whispers, and maybe this worried him.

“Are you okay?” he asked with disdain.

This is marriage, I told myself. This is what the contract entails: moments, even stretches, of misery and unhappiness. Loyalty compels humans to live in inhumane conditions. Sometimes loyalty sends people to their graves.

My Aunt Boo worked at the truck stop on the rez. I watched her skip around the dining hall and smoke at the bar until her husband came. She was always pale, but she became even more ghost-like when he walked in. Sometimes she looked at me with a scared, bloodless face that told me it was time to run and get my uncles. They would come and drag him home so that she could finish her shift. His drunk rage would have killed her if she hadn’t disappeared one night with a trucker from Manitoba.

I empathize with Quentin, especially when he’s pretending to care.

I took out several bulbs from the vanity in the bathroom one night as I was going mad, so that I only saw a dim, dumb version of myself. I couldn’t look at my reflection. My skin was too alive, and my eyes too dull. I felt impassioned by my conflict, my affair, and dead because I had ruined myself. What I desired was turning into myself, in a dark room, facing a wall wrapped in cold sheets. I wanted to be where the shame was.

We met cute at the library. I sat reading an article about Adam and Eve called “Bodies without Malice.” It went through the motions of Eve’s transgression and Adam’s contempt. After the descent of man God sent out his only son as sacrifice. Man had to descend to ascend.

“I come here to be bothered,” I said. “I’m bothered by this article.”

His hand felt very soft and his wrists were hairy. He shook hands like I was a man.

“Oratory,” he said. “I wonder how you teach that.”

“With my mouth and their ears.”

Gary’s pupils went large. “Would I be able to sit in?”

I was up all hours of the night, crawling walls and watching bad TV. I was becoming someone Quentin thought was unimpressive and ordinary. I sat on the couch one day and he asked me strange questions to make me creative. He asked me to write his obituary.

“I feel more dead without the wife I knew,” he said.

“I’m sorry I’ve become such a louse,” I said. “I’m sorry I am so much less than I was before, but what are you? You have had the same job, the same credit, the same wage, the same everything.”

Quentin grinned at me to be cruel. “You think I’m happy with you? Do you think I’m happy watching you slink around and lose your job, being a lazy, crazed woman? How many years did it take us to get this house, or get these jobs? You’re just throwing it all away. Was he worth it?”

“I worked hard for everything I throw away. I wish I could get rid of you.”

There were tears in his eyes and I grinned to be cruel. He wanted to hit me and so he left me alone. He didn’t come back for two days and I didn’t ask him where he went. I hoped that he was with another woman. 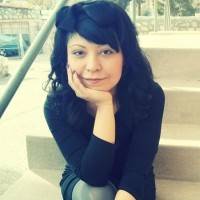 Terese Marie Mailhot is from Seabird Island Indian reservation. Her work has been featured in Carve Magazine, Yellow Medicine Review and is forthcoming in The Offing. She works as a columnist for Indian Country Today and studies at the Institute of American Indian Art.