Ten-Cent Stories, Typewritten While You Wait

“Write me a story about a backpacker whose dying wish is a tiramisu cupcake.”

“Write me a meet-cute about Cthulhu and a woman at a bar in the style of Charles Bukowski.”

I say yes. Of course I say yes — I’m the man sitting under the tree with a typewriter. In the two years I’ve been busking, I’ve written over 250 stories for strangers. I’ve only ever turned down one prompt.

It works like this: I’m at the Lake Ontario Beach pier in Rochester, NY, or at the Union Street farmer’s market, or at the Corn Hill Arts Festival. I’m wearing a brightly checkered shirt, dazzlingly white pants, and brown-and-turquoise-colored women’s cowboy boots. A fellow comes up to me, and asks me, with a general wave at my setup (chalkboard sign, ceramic sugar jar for tips), what all this is. And I tell him if he gives me a prompt, a first line, a character in an unusual situation, an object that’s broken in a weird way, or anything of that ilk, I’ll write him a story.

It’s hard for him. He’s on the spot now. He stands off to the side, thinks for a while, comes back to me, and tells me he has it.

At that moment, if I had to guess what sort of story he’d ask for, I’d have said it was probably going to be another prompt about Marines invading Canada. But I’d be wrong. He, like everyone I write for, surprises me.

“Write me a story about the Lorax returning to the private sector, after years of unsuccessful tree activism,” he says.

I put a half-sheet of the cream-colored résumé paper I bought at Walmart in my Montgomery Ward no. 22, which I purchased for five dollars at a moving sale in a now abandoned house in Meadville, PA, and type.

“I don’t care what salary he’s asking for,” the CEO of ExxonMobil said. “We want him and we’ll pay for it.”

“Well, he’s here now, in the waiting room. You can tell him yourself,” the secretary said.

“I knew you would,” said the secretary.

The Lorax was short, and orange, and hairy, and just as cretinous as the CEO had dreamed for all those years that he’d advocated for the damn trees. Now here he was, hat in hand, asking for a salary and a living. He’d seen the light at last.

“I’ve dreamed about this moment,” the CEO said.

“I’ve had nightmares about it, as well,” said the Lorax in his sing-song voice.

“What made you change your mind about us?” said the CEO

“Don’t gloat,” said the Lorax. “If I catch you gloating I’m walking right back in the forest.”

Many of the prompts I get are for stories about people’s grandchildren, for their grandchildren, or about their dogs. I’ve written stories about Elsa and Spiderman teaming up with little Charlie to save Rochester. I’ve written about Dora the Explorer and bene taxed trying to remember the names of the children in Lemony Snicket’s books. It’s hard to do anything clever with those stories, but the little ones often don’t care about clever anyway, so I write what they want as best I can.

I think they like the stories, but it’s hard to tell sometimes. One little girl — she couldn’t have been more than seven — asked if I could write a story about the future. When I told her of course I could, she asked me, with a deadly seriousness, if I was a time-traveler.

Not everyone wants to be entertained. Once, at the pier, a woman came up to me. She wanted a story about a person who is in love with a man, but can’t tell him that they’re in love with him.

“Great!” I said. “But what’s the conflict? Why can’t the person tell the man they love him?”

Another time an older woman approached me. She told me that since she lost her husband a few years back, she’s had a dark time of it. She said it’s so hard for her to find the joy in life anymore; that she tries to focus on her children and her grandchildren, but she still just feels so sad. Could I write her a story about that? About where she should find joy in life?

Sometimes I get writer’s block. But this was not that. The woman was in real emotional pain and she needed an answer — not just a story — and what was I supposed to do with that? And — here’s what’s worse — I started the story, because she asked me to. I painted a picture of the sadness. There was one line I was proud of, about seeing the world through coal-colored glasses. Then I started paragraph two, where the story should take a turn towards uplifting, and suddenly there I was looking at my own life and wondering where I find the joy, and honestly my answers were too fragile to share with her. I was just a stupid twenty-six-year-old dude. I wanted to tell her, “Lady, if I had the answers, I sure wouldn’t be in upstate New York right now. “

But I wrote on. She was waiting, and there was someone else in line behind her. I wrote about focusing on the bright parts of living, and about how over years the grey spots get smaller. I tried to avoid sentimentality without being depressing. I don’t know that it worked. I gave her the story, she walked off, and I knew I’d never see either one again.

Some folks ask for advice in a story, and some want answers to the questions in their lives. The most surreal and frightening moment I’ve had involved one intense man who was — I think — asking me for absolution for having, without the slightest provocation, hit a woman thirty years ago.

The only prompt I ever turned down came when I was first starting out. A woman came up to me and asked me what I was doing.

“I write stories for anyone who wants one,” I said.

“Do you write dark stories?” she asked.

“Because I have dark stories,” she said. “Lots of darkness in my life. Will you write a story about CPS? I want three stories.”

She told me CPS had taken her child from her, and that she had such a story about how the bonds of motherhood could persist for eighteen years. I felt like I was in over my head. Then she got angry and started yelling about the government. People started to look at us, and I think we both felt uncomfortable. She never told me what the three stories were supposed to be, and walked away instead. I left a little early that day.

But the lovely moments far outnumber the sad or unsettling ones. A man came up to me at the pier, where he had been fishing. He told me he had lots of stories. “Like what?” I said.

He said he was an undocumented immigrant. That he was born in Honduras. That he made his way up to Mexico, and from there he snuck across the border by squeezing in the top of a boxcar filled with lumber. He said the car was so full, he had to turn his head sideways so he would fit. He rode in the car for three days, but he’d gotten on the wrong train — so instead of taking him deep inside America, the train had followed the border, and he still had to be careful about the border patrol. As he walked around a little border town, some kind men — good Samaritans — bought him a Greyhound ticket to Dallas. He got to Dallas at four o’clock in the morning, and he was safe in America, and he walked around the empty streets until the sun came up.

I wrote it up as best I could.

Or this one: A man and his wife struck up a conversation with me. They wanted a story about their son. They wanted him to come to the pier with them that day, but their son really disliked being outside. He was on the spectrum, they said, and also terrified of bees. But he was kind and he liked robots and he was really smart.

“Can you write a story about my son? Being with us here today?” the father asked me.

I wrote that the father and mother wanted their son to join them. He was frustrated, because he wanted to come outside but the bees scared him and he wasn’t going to risk meeting them. So he locked himself in his room for a month. His mother got worried. He was only leaving to grab a plate of dinner, and then he’d go back immediately and shut the door. Weird noises came from the room at all hours of the night. And after a month, he emerged, deep circles under his eyes, and a tired grin on his face. In his hand was a robotic bee. All over the world, the bees were eradicated and replaced with robots. And in a year, the son and his mother and father came to the pier, together, now safe from the threat of stings.

A dopey story, and the bees being replaced feels a little too much like a real thing that humans at their worst might try to do, but hey, I had five minutes. The father smiled when he read the story and thanked me again, and it felt like we’d both taken something good from this story we’d made together.

“Write me a story about a circus being attacked by train pirates.”

“Write me a story about a young woman with a rare form of liver cancer.”

“Write me a story about my husband — a frugal accountant — building a fence, but put the whole story on the moon.” 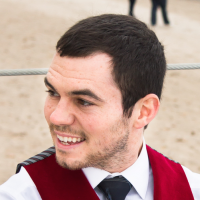 Karl J.P. Smith is a scientist and raconteur living in Rochester, NY. He has an audio theater podcast about bootleggers and another podcast about life in graduate school. Find him on Twitter @10centstories.