The walk from the subway to the Society of Illustrators isn’t long. So when I say that my apprehension grew with every step I took along Lexington Avenue, I mean that it expanded rapidly, like the chorus of a Pixies song.

It was early autumn, and just starting to get cold in Manhattan. I wore black sweatpants, a jean jacket, a purple scarf. Soon I wouldn’t be wearing anything at all.

In my bag I was carrying a leopard print robe I had bought for this gig, something to wear in between poses to help me play the part of a model at ease. The truth was, I had never actually posed for a class like this. I had impulsively applied, figuring it was in my wheelhouse (more on that soon). It could be a quick way to make some extra cash while I focused on building my freelance writing career.

By the time I arrived at the bright red door of the Museum of Contemporary Comic and Cartoon Art, I felt like I was going to blow steam out of my ears. Still, I kept going, expecting my customary boldness to kick in at any moment. My racing pulse and tensing muscles were telling me something that my mind couldn’t compute. There was no way in hell I could actually be scared to be naked in front of strangers. Not me, not now.

A pretty woman about my age sat behind the front desk.

“I’m here for the Figure Drawing class,” I managed to tell her. It seemed like she was at the end of a long tunnel. Laughing nervously, I attempted a joke; “I’m the Figure!”

She had a friendly smile, but I was too frightfully far-gone to be put at ease.

“Third floor,” she gestured to the stairs.

MOCCA’s stairway is narrow and steep, and claustrophobia only heightened my anxiety. I didn’t even know whom I was supposed to talk to when I got to the third floor. The woman who had booked me for the gig had the unpunctuated digital correspondence style of someone who was too old or too busy to bother with email etiquette. Was it the lack of structure that was causing the freakout I was trying with all my might to ignore?

The third floor felt more like a cocktail hour for wealthy Upper East Side art patrons than a community class. The full bar was already busy, the jazz band was warming up, and there were at least twenty people sipping from glass tumblers and warmly socializing. The median age appeared to be forty-five.

Instead of comforting me, or making me feel in control, seeing the actual scene of the room in which I had agreed to take off my clothes and be carefully scrutinized for three hours sent my terror boiling over the edge.

I walked through the room, past the folding chairs reserved with sketchpads and cardigans. The chairs were arranged around a small area that was clearly meant for the models. My eyes darted, hoping to look conspicuously out of my depth, the person who didn’t belong and therefore the one who would be the center of attention, like a cult sacrifice. I knew as soon as I connected with the organizer, I wouldn’t be able to back out.

I walked through the room, and no one approached me. Suddenly, I turned on my heel and made a bee-line for the door. On the way down the stairs, I got caught between three older ladies gossiping between the landing, and I almost puked on them in fear that someone would call after me. I walked out the door onto 63rd street and burst into heaving, gut-twisting tears.

It’s not all that notable for a thirty-two-year-old woman to get cold feet about being paid to take off her clothes in front of strangers for an evening. The thing that makes it weird for me to chicken out of such a gig is that I have been professionally naked for almost a decade.

I also recreationally frequent sex parties and kinky play parties, where I thrill to the pleasures of sexual extroversion.  I don’t even need to feel like the center of sexual attention to be comfortable naked. My idea of a relaxing afternoon is schvitzing at a banyan, and when I’m hiking I can drop trou and relieve myself in the time it would take you to refill your water bottle.

For a long time, my identity has been tied up in my shamelessness. I know that level of vulnerability freaks most people out, so I take joy and probably some sense of superiority in being some kind of nudity wizard. I like it when people look at my body when I have given them permission or charged admission to do so.

Sex work can involve a lot of fashion, and I have learned so much about feminine glamour from my coworkers. But the thing that has always been the most magical to me about sex work spaces was the fact that I could be naked in them.

Of course I was undressed on set, having sex, or in session, tormenting clients. But it was even more fun to be brazenly naked in dressing rooms, offices, or the kitchens of friends whose houses we had taken over for a shoot.

I love my body. I love my muscles, and I love my proportions, including a notoriously logic-defying derriere. I love my pink puffy nipples and high arched feet and guitar-player fingers. I love my hairy legs and the smell of my own sweat. I have long relished the fact that I’ve made my living by rubbing men’s faces in my own adoration of my strange little body.

So why, on this day, was my body telling me it didn’t want to be shared with these particularly Upper East Side strangers?

Walking rapidly toward Park Avenue, I pulled out my phone to call the SOI organizer.

Doing my best Ferris Bueller voice, I feigned sudden illness and apologized for canceling at the last minute.

This honestly made me feel better than if she’d expressed polite sympathy. It was A Very New York way to handle the situation.

Knowing that I had relieved myself of responsibility to the gig, I was free to walk and sob and try to figure out what the hell had happened to me.

My incredibly patient and understanding partner met me on Lexington, and we took a Feelings Walk to the water.

The East River was there, conveniently, to be walked along. The 59th Street Bridge loomed appropriately, for perspective. I tearfully explained what had happened. I breathed. I tried not to panic. I got over my shame. Grief welled up to replace it.

“You’re changing,” she reminded me. “You’re a writer now. You’ve retired from sex work, but you haven’t really admitted that yet. It’s possible you’ve rounded a corner, and sharing that part of yourself isn’t how you want to make money anymore.”

“I am so glad I did it when I had the nerve,” I found myself saying. I was thinking of my mid-twenties self, the way it filled her with power and bliss to do something that scared other people so much.

I rummaged in my bag for my water and found the leopard print robe. Regret welled up again. There was a piece of clothing I’d spent a few bucks on, a costume for a professional naked person. What was I supposed to do with it now?

“Why did my body betray me? My body has always made me brave!” I moaned.

“I think,” she said, “it was braver of you to admit your vulnerability than it would been brave for you to stay.”

I saw Michael Haneke’s Funny Games back when I had been doing sex work for a few years. It’s a terrific and horrific punishment of the bourgeoisie, in which two young men torture a family in their summer home. At one point, the villain instructs the mother to strip. You can tell by the way she quakes in humiliation that, of all the craven things she is forced to endure, being naked in front of strangers is the most agonizing.

When I saw this movie, I thought to myself, “If someone wanted to fuck with me, they would have to do better than tell me to strip naked. That would just make me feel more in control.”

I still don’t really know what happened to me that day at the Society of Illustrators. In a way, I think I didn’t want to take off my clothes in front of people without having something to say or a way to move. I didn’t want to be naked without being revered as erotically powerful on my own terms. Maybe I’d just got soft – literally, after a decade of standing up tall, I had spent the past three years hunched over my laptop, and I suspected you could see it around my jaw and belly. Or maybe, at thirty-two, I just didn’t want to be naked in front of strangers for $20 an hour, and I was going to have to get over that.

The weekend after that experience, my friends and I piled into a van and drove to another state for a weekend-long queer leather sex party. In my early days of sexual explorations, an event like this would have been strictly professional. When I thought about what to wear, how to be, what kinds of scenes I was going to do, I would have thought about it in terms of how much money I was going to make and who I was going to meet that was going to get me another gig. I would have revved up for the experience by glamoring myself into a larger than life persona called Tina Horn.

Absolutely everything about this group trip resembled friends with a common interest going to a weekend sports tournament or nerd event. We packed bags of gear and snacks and shared stories. The only funny thing was that we were going to a huge private warehouse to role-play scenes of power play, to show off leather corsets, to beat each other black and blue with wooden canes.  This is one of the ways my community celebrates our queerness and our kinky desires; by playing at it, all together, and treating it like it ain’t no thing.

Recently I had begun to realize that, because I’m an actual pervert, I could do the things I wanted to do, wear what I wanted to wear, play the scenes I wanted to play. My propensity and comfort with public sex had evolved from an occupation to my recreation.

In my bag, I packed sequined panties, a lace bodysuit, stiletto heels, and my leopard print robe. I thought it might be a good way to heal from my confusing failed attempt at live nude modeling. I thought I could find a new use for it after an intense play party scene, when I wanted to cover myself. But I never actually ended up wearing it there, either.

It turned out I preferred to be naked. 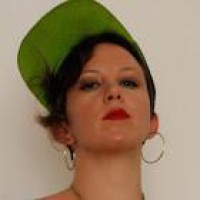