“Can I take a picture of your pussy?” he asked.

I had seen him every Thursday night for the past couple of months, so I knew the drill – I was the most gorgeous girl, the perky tits, the tight little body, the perfect ass, the beautiful pussy. These things interspersed with commentary on the classic rock on satellite. Every time the song changed he would look up and ask me if I knew it. He was a grandfather with a firm beer belly and a long silver braid, and every single time I saw him he told the same uproarious story about the time he had forgotten to take down his sex swing before his grandchildren came over. He always took the full hour, but he never tipped. Listening to him for all that time was the most difficult part, even though his dick was bent sideways at a forty-five-degree angle, and that presented other problems. I let him take the picture of my vulva, and checked it after to make sure that none of my more immediately identifying features were visible. I’m a generous person.

On the way home, the agency driver opened the sun roof to let in some fresh air and cranked up the radio to be heard over the bellowing wind. Led Zeppelin’s “Ramble On” was playing. It was two o’clock in the morning. Somewhere, I imagined Melissa Farley was sleeping. Or perhaps she was awake too, working, like me – or else kept from sleep by the moral terror that she conceives of as my life.

It always surprises me how little people can get away with knowing about sex workers. I had a client once who assumed I had children to support, and was scandalized when I confessed I didn’t. “You’re just one of these selfish women,” he told me, “these selfish women who want to move to a beach somewhere with a pair of massive fake tits and live off the interest.”

That wasn’t the immediate goal, I told him, but yes, that sounded good to me. First, though, I’d like to finish my bachelor’s degree without starving. That’s what Farley and her ilk cite as the damning evidence that my work isn’t really my choice – if not the children, or the drug habit, or the malicious pimp, then the not starving. As though this makes me vastly different from anyone else working a job solely for the money.

I’m a full-time student. I used to sling fast food for minimum wage. I worked doubles on weekends and clamoured for shifts through the week even though I knew it would mean that I would be up well into the night finishing my readings for class the next day. It was a hamster wheel of a time. If I wanted to make enough to cover my bills, I needed to work more than twenty hours a week. Part-time workers can’t get those kinds of hours, and even if they could, my grades started to suffer as soon as I was consistently working ten.

I can say without any reservations that my year of student labour was far and away more degrading than the two years of sex work I have under my belt. If I got sick too often working at the fast food place, I had to provide a doctor’s note. I suffered abuse from customers who lumped me in with the automated machines. My gifts and talents were utterly squandered as I stood, sometimes for hours at a time, staring at the door, waiting for someone to come in and put me to use, knowing that if I got caught reading or writing or even listening to music I would be reprimanded. All of this and I wasn’t making enough money to pay rent and utilities in the same month. Groceries became a luxury. And yet people laugh about student poverty — they joke about cavities and scurvy as though one’s early twenties are merely a dry run for real life and one cannot actually starve to death.

The platform we’ve given to people to evangelize about a job they’ve never worked and whose workers they are not listening to has created a climate in which I must prove beyond all doubt that my choice is my own. This was phrased best by a man I used to be friends with who would regularly post articles about the horrifying conditions of human trafficking, equating this with what I choose to do for a living. I sent him a message once explaining his false equivocation, and though he was not cruel or belligerent, he persisted, telling me: “I’m still not sold on the supposed agency of sex work.”

When I was in high school, I was shown a video in law class about abortion. A young girl wished to terminate her pregnancy, and the video followed her as she was exposed to differing opinions on the matter. One man told her that a good girl would never choose this. I thought that perhaps he needed to expand his definition of what a good girl was, or what a choice was. Choices are complicated – it should go without saying, but it doesn’t, not when an overwhelming number of people who have never done my job keep trying to keep my job illegal and my work unsafe. I have to sell them on my own agency.

Like a pro-life lobby that doesn’t support welfare, or affordable daycare, or clean drinking water, or universal health care, we are facing off against a movement that seeks to destroy something without offering anything in its place. Farley and her friends aren’t demanding that we raise the minimum wage, or lower tuition rates, or make the basic necessities of life like food and water and shelter and health care a universal right. They aren’t even offering to cut a cheque to all the people, primarily the women they claim to care so much about, who will be without a livelihood should their prostitute-free utopia come to fruition.

Which it never will, of course. I work in Canada. The day Bill C-36 passed into law, I saw a client who hadn’t even heard about it. I’ve had clients who were police officers. I know women in the capital who have had clients who were politicians. They call it the oldest profession in the world for a reason. It endures. Melissa Farley hasn’t been listening to sex workers – she took a skewed sample of men who visit sex workers and men who don’t and drew conclusions about their potential danger based on hypotheticals.

I don’t live in hypotheticals. I live in the voluntary sex trade. I’ve been assaulted by countless men. By a man who was a client? Only once. Studies like Farley’s, poorly conducted and disseminated by media outlets with ostensible integrity, increase the stigma against my work and make it more difficult for me to defend myself against the violent one among the gentle many. When we cannot defend ourselves, we get hurt, or killed.

The night I saw the grandfather, I got home a little after two o’clock in the morning and folded the evening’s earnings into the wad of cash I keep ferreted away to deposit before the first of every month. I peeled myself out of my dress and lingerie and replaced them with sweatpants and a t-shirt that I used to wear when I ran track in elementary school; it drowned me then. I decided to watch an hour of Bojack Horseman before bed. I’m a little late on the uptake with most shows, but once I get into one, I binge.

That was the end of my night. I didn’t shoot up or cry about the most recent piece of my soul I had auctioned off. I didn’t toss the keys to the Rolls in a crystal bowl and double-check my appointment for my breast implant surgery. These experiences are fine, of course, as long as the people they belong to are reasonably safe and happy. They’re just not mine. That’s what people understand least, I think – how little like hell or heaven sex work is, no matter what people like Melissa Farley would have you believe. I thought about her briefly, sleeping somewhere, dreaming of her crusade. Only briefly, and then the moment passed. 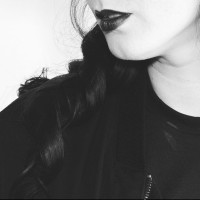 Marlena Evans is a sex worker and artist with a pretty impressive collection of dead plants. She can be found on Twitter @evenmarlena.