I read the text from Mama after working on a paper about the conflicting attitudes toward Charles II for a restoration literature class.

Yasmeen did you get my email

I look at the email. The subject is please correct.

I peruse the email, deleting the unnecessarily lengthy sentences, editing them so there’s parallelism within them, restructuring the email as a whole so it’s more cohesive. I insert a few adverbs and light adjectives to give it a friendly but professional tone and send it back to her, telling her to let me know if she needs me to fix anything else. She texts me when she’s received it:

When I was thirteen years old, my mother decided to go to graduate school for a Master’s in Nurse Practitioning. It was then that I began to become a better writer, as I helped her with her written English.

Not only was my mother going back to school after more than twenty years, but she was also getting higher education in a language that was not her first, doing so while working full time and caring for a household of five. At thirteen, I was too self-absorbed to marvel at such ambition. I only paid attention to her pursuit of an MSN when it directly affected me — on weekend mornings. All I wanted to do was sleep in and update my Xanga with survey questions about the last show I watched, the last song I listened to, and the last book I read. But because my mother didn’t know how to type and needed to focus on formulating research questions and ideas for her case studies, I would instead transcribe her graduate school papers while she told me what to type.

The week before Mama had a paper due, we would spend the entire weekend working on it together. She would sit on a chair next to the computer, with nursing textbooks and sporadically scribbled-on notebooks strewn across the desk. Staring at the computer screen for hours and transcribing advanced medical terms about complex topics forced me to read and reread. Sometimes I would notice a missing comma, or see that two sentences didn’t necessarily flow well together, and I would change the structure of the words. Suddenly, I had a larger vocabulary, thanks to the research journal text I was paraphrasing.

At thirteen, correcting my mother’s written English was a deterrent to my enjoying a full Saturday meant for eating leftover pizza and watching Spongebob. But later, her English became something much more damaging — it made my strong and invincible and confident mother nervous, overwhelmed, and uncomfortable.

As I began to mature and experience the inevitable identity crisis of being a hyphen-American, I turned to my mother for answers and guidance. Mainly, I wanted to know what it was like living in the United States as a Muslim immediately after the events of 9/11, since I was only ten years old in 2001 and couldn’t understand the full scope of what it meant to our community.

Yes. When we would call your uncle Osama in Egypt we wouldn’t say his name because we didn’t want the Department of Homeland Security to get confused.

What did you think was going to happen to us?

We had no idea — but some Japanese people came to the mosques to tell us this happened to them too at one point, so we thought we might be put in internment camps.

Were people really racist to you?

Sort of. My coworkers used to sit around the break room casually commenting how horrible those Arabs are and how the only solution was to go into Iraq and kill them before they killed us.Then they would tell me, ‘But not you, Sally! You’re a good Arab; you’re not like the others.’

Here was the good stuff, a situation every Arab, every Muslim in America has faced in some capacity. I asked my mother how she put those ignorant bigots in their place. Did she educate them about what Islam really teaches? Did she explain how bombing Iraq wouldn’t solve anything?

She confessed that she said nothing. She admitted that maybe if she spoke better English — English without an accent — she would be better able to respond to such ignorance. But she feared that her English as a second language would just make her seem unpatriotic, guilty by association.

I was furious. Furious that the media’s dehumanization of Muslims and Arab Americans was successfully seeping into people’s minds. Furious at my mother’s co-workers (whose Christmas parties and summer barbecues I had attended) for their ignorance.

But most of all, I was furious at my mother for allowing her friends to denigrate her — and all of us. She should have said something. Anything! I know I would have. I would have had quick responses; I would have put those ignorant people in their place.

Recently I was at the supermarket, waiting in line to buy American products — surrounded by my fellow American supermarket shoppers — when an elderly white man turned to me, put his hands on my shopping cart, and asked me why I wore a scarf on my head.

I wanted to say something clever (“this red scarf matches my cute sweater!”), but he already knew the answer.

It’s your religion, isn’t it?

Yes, I stuttered. I could feel myself blushing and beginning to shake. He was a loud, forceful man, his voice interrogative. Now the other people in line were staring at us.

Where are you originally from?

(That wasn’t the answer he was looking for.)

Then he smiled and patted me on the shoulder with his large hands, as if to tell me I had been a good sport.

When he left, I began to cry. It had been my first direct encounter with someone who was being hostile because of my race and religion, and it hadn’t been anything at all like I had imagined. I had said nothing. I didn’t bring up Iraq. I was a native English speaker who didn’t have any trace of an accent, and I hadn’t known how to respond to such ignorance in the moment.

The other customers looked at me sympathetically. One older white woman apologized profusely for the man’s behavior and told me that I was welcome here. The cashier, a college student with peach fuzz, just tried to pretend the encounter hadn’t happened. He asked me if I was playing supermarket Monopoly, if I wanted any coupons.

Now when Mama texts or calls me from her office and asks, in a hushed whisper, about an email she’s about to send to an irresponsible co-worker, it occurs to me that perhaps she isn’t calling me to discuss grammar because she speaks English as a second language. I think that maybe she is just having trouble brainstorming a nicer word for “negligent,” and she knows that if she comes off as confrontational, even slightly, things won’t go well for her.

So I take her call, and we talk about her email and what she should say, and we try and think of less harsh words, together. 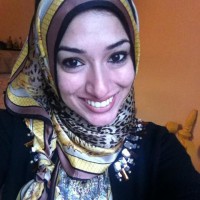 Jasmine Riad is an aspiring high school English teacher, the type to whom kids give elaborate and thoughtful Christmas gifts. She currently lives in Burlington, Vermont with her husband and their dead herb plant.