From America, With Love: Dating as a New Immigrant

Each time I come home to the Philippines I am met first with a sensation like dissolving. Each year, my plane touches down in the middle of the night, and drifting into the crowd at baggage claim I come to the realization that I am no longer the exotic face; shoulders and tongue relaxing, I drop my American accent and revert to my native language. For five years, I have been living in the United States, and it has begun to feel more like home to me than this country I now visit for just one month a year. Still, surrounded by strangers with familiar faces, faces like mine, one cannot deny that this is the feeling of homecoming.

A week later, Adam makes his own touchdown at the Ninoy Aquino International Airport. For him, coming to this place means to be seen, means that his white skin and blue eyes mark him, in these rare moments, as someone other. The first time he came to visit, he had asked, is this how you feel all the time? Now, as we drive home, he kisses me and tells me how familiar it all feels.

I think of this rhythm my life has gained from flying back and forth across the world, how I thought I would be alone in this. I think about this man and how he has come to share that rhythm for the past two years.

He kisses me, and tells me about a man he met at the San Francisco airport. I told him I was visiting my girlfriend in the Philippines and he said, ‘Why would you do that to yourself? You’re too cute for that.’ He thought you were some mail-order bride. I told him it wasn’t like that.

He kisses me. I almost want to pull away, but I don’t know how to explain why.

In history class, Filipinos are taught to be grateful for our Western colonizers. After all, without the Spanish, who would have delivered our beloved homeland into the embrace of Catholicism? Who, but America’s own General MacArthur, would have liberated the Philippines from the Japanese and ended the horror of World War II?

Coming to America for the first time, I was thankful. Just like I was taught. I was thankful to the university that had accepted me, given me a U.S. visa and a place to live in Boston. As a college freshman, I quickly became friends with two girls who had been born and raised in New England, and embraced my identity as “the exotic one” of our group. After all, wasn’t I?

At parties, feeling men’s eyes on me, I would turn to these two friends and say, listen, it took me 20 hours on a plane to get halfway around the world to this party. I’ll be damned if I don’t use that to my advantage.

When a man did finally come up to me, often the first thing they said was excuse me, where are you from? I always wanted to know what they thought first. Their ignorance was a game to me. If they guessed right, I gave them my praise. Either way, they got my attention.

The first time I made love to an American man, he whispered to me, I love the color of your skin. That was the first time I had ever felt less than myself, only loved for my appearance, and I wondered if that made me someone different.

Over the years, I would meet men who told me they loved that I was foreign, men who loved me in spite of it, men to whom it only mattered when I told them stories about my past. But you’re so…American, they would sometimes say, and I would agree. I would tell them how I changed my name and my accent when I arrived. When you looked different, spoke different…sometimes different was the only thing other people could see.

The summer I turned nineteen, I started dating a man who only ever referred to my race by occasionally calling me “Hello Kitty.” He enjoyed hearing my stories about growing up in the Philippines, but other than that our conversations revolved around music and psychology, our shared course of study. One day, after six months of dating, he used my laptop to check his email. There on the screen was a love letter from his girlfriend in China, whom he’d said he had broken up with almost a year ago.

It was the proof I needed to solidify an idea that had been hibernating in me since I came to America: the fear that, as a fetishized being, I was easily replaced, competing with all the other Asian women who I was told looked just like me. In this case, I was the replacement. I was Hello Kitty, and so was this man’s girlfriend, and to him there was no difference.

I met Adam during my final year of college, the year I would have to return to the Philippines after finishing my undergraduate degree. I had successfully done what I had come to Boston to do; now my visa was being terminated, and I would have to leave the life that had taken me five years to build.

But then I applied to a graduate program in Boston, which gave me a new student visa and allowed me to stay in the U.S., at least for a little while. Adam and I now live together in an apartment with a view of the city skyline. He has visited the Philippines with me three times. We have graduated together, and traveled the world together. He taught me how to snowboard, I taught him how to cook. He was there for me the day I spoke to my mother for the final time.

In our kitchen now, hanging above our dining table, there is a collage of pictures, postcards, magnets, ticket stubs, memories upon memories stacked over each other in layers. In each picture, we are touching: an arm around the shoulder, hand brushing hand, our cheeks together. Reaching for each other. Even in those times when we have been half a world apart, we have reached and found ways to come together.

How could I communicate this to the man he had spoken with about me at the San Francisco airport? How, even in my own country, could this incident remind me that I was so different?

In the car, I watch the airport’s looming silhouette shrink smaller and smaller in the rearview mirror. I think about the summer Adam and I went to New York and saw the musical Miss Saigon on Broadway. Loving that musical, I told him then, had been a large part of my identity since the first time I saw it at the Cultural Center of the Philippines, when I was eight years old. Back then, I had never before seen a person who looked like me in so grand a production, never witnessed such talent as Lea Salonga had beneath those spotlights, her voice reaching out to the American soldier who had abandoned her and her child in a slum. On that grand stage, spotlights gleaming, it was easy to believe the tragedy of that story was but a testament to the magic of the theater. In the final scene of the musical, Kim, dirty and sobbing, surrenders her son to the arms of the gleaming white American family she is sure will give him a better future. Then she kills herself.

Was this how that man at the airport saw me? To him I was Kim, was Hello Kitty, was the woman in the sorry state, either desperate enough or conniving enough to be loved. Never deserving of that love.

This is the single story forced down the throats of women like me by countless movies, operas, TV shows — even my country’s history books. It is the story I tell myself on those days I am forced to remember that America is not my home.

These days, I try not to imagine who will steal my love from me first: another Hello Kitty, or some faceless blonde head more deserving of that love than me. It is an irrational fear, I know, but one that I have yet to shake. I turn my American accent on and try not to miss that feeling of dissolving. I remember that, unlike what I was taught about my country’s independence, my relationship is not a debt. It is not something I owe to anyone.

As an Asian woman, I find that I am often asked to second-guess myself; to forgive and understand others before I am allowed to defend myself. Like the actresses who win the role of Kim in Miss Saigon, my bliss is entangled with my oppression. But I am hoping that, like history, this is one story that can be rewritten. I tell people it is owed to me. I will make it true. 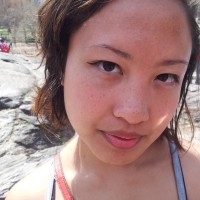 Frankie Concepcion is a writer from the Philippines living in Somerville, MA.