“The Real Mr. Darcy”: A Literary Pilgrimage to the Jane Austen Centre

on January 7, 2016 in Literary Pilgrimages

“Jane Austen never attended services at Bath Abbey,” Mr. Darcy informed me. He was wearing a poorly-fitting imitation silk riding coat, and he carried a walking stick.“You see, she was Protestant and would not have liked the Catholic services. She wrote in Sense and Sensibility about the dangers of too much romanticism and sentiment, and undoubtedly she would have disliked the ceremony of Catholic ritual.”

I put up my hand like a schoolgirl. “Sorry,” I said. “But this was the nineteenth century, right? So this church couldn’t have been Catholic.”

Mr. Darcy looked a little hunted. “When the church was founded in 973, it would have been Catholic,” he said.

That was the wrong date, but I let it go. “Sure,” I said, “but Jane Austen lived post-Reformation. There’s no way this church was Catholic in her day, right?”

Mr. Darcy’s eyes glazed over. “Of course, madam,” he said. I was pretty sure Mr. Darcy did not know what post-Reformation meant, but he was being very polite about it.

Darcy is not high on my list of reasons to read Austen. He is outranked by her beautifully balanced sentences, each one polished until it shines like glass; her wit; her women. Austen’s men tend to be cyphers, plot devices to service the stories of other characters, but her women are all so funny, so finely drawn, so distinct, that it astonishes me every time I open one of her books.

But what is most fascinating to me about Austen is how very small her world is. Her books exist in parlors and drawing rooms, behind needlepoint samplers and hands of whist. It’s an incredibly privileged world, of course, but it is tiny, and its boundaries are iron-clad.

Austen’s critics say that this is what makes her books airless and dull. It’s what Charlotte Bronte was talking about when she observed that Pride and Prejudice is “an accurate daguerreotyped portrait of a common-place face; a carefully fenced, highly cultivated garden, with neat borders and delicate flowers—but no glance of a bright vivid physiognomy—no open country—no fresh air—no blue hill—no bonny beck. I should hardly like to live with her ladies and gentlemen in their elegant but confined houses.”

For me, Austen’s elegant but confined houses are part of her allure. Bronte was entirely wrong when she concluded that “the Passions are perfectly unknown to her”—it’s just that Austen’s passions are subliminal. Within this tiny, highly regimented world, every little object takes on special meanings and resonances, just as the smallest action the characters perform carries enormous social and emotional significance. Think, for instance, of all the meaning carried by Lizzie Bennet’s muddy hem: it tells us that Lizzie is more worried about her sick sister than about her dress, that she is athletic and energetic enough to enjoy walking in the mud, and that she is attractively rebellious against strict social conventions, while Caroline Bingley cares more for clothes and conventions than the health of her friend. There is an entire social treatise packed into that single muddy hem.

So when I found myself in England with a few spare days on my own, I decided I would go to Bath. Jane Austen is a cottage industry in Bath. It is the home of the Jane Austen Centre, it hosts an annual Jane Austen Festival. Historically Austen hated Bath, but she lived there for years. It would be fascinating, surely, to see the actual domestic space of a writer who is so focused on small domestic details.

Of course I knew there would be Mr. Darcy merchandise all over the place. I have seen the statue modeled after Colin Firth in his wet shirt; I have seen the bookshelf at Barnes & Noble dedicated to Darcy fanfiction. But that was fine. I have nothing against women swooning over Mr. Darcy. He is, after all, designed to be swooned over; it is his primary reason for existing.

“Sir Walter Eliot,” Mr. Darcy informed me and a gaggle of Swiss tourists, “did not think highly of the women of Bath. In Persuasion he complains, ‘The worst of Bath was the number of its plain women. He had frequently observed, as he walked, that one handsome face would be followed by thirty, or five-and-thirty, frights; and once, as he had stood in the shop in Bond Street, he had counted eighty-seven women go by, one after another, without there being a tolerable face among them.’” The Swiss tourists giggled as Mr. Darcy lowered his book. “Ladies,” he said, staring earnestly into our eyes, “you are all beautiful.”

Mr. Darcy was leading the Jane Austen Centre’s walking tour of Bath. According to the Centre’s brochure, on this tour you get to experience Bath as Jane Austen lived it for the nominal price of ten pounds. What actually happens is that you go on a facsimile of the same walking tour that the Mayor of Bath’s office offers for free, only in the Jane Austen version you pay the price of a movie ticket plus popcorn to be led around by a costumed actor instead of someone who knows what they’re talking about.

And this actor is playing a very specific version of Mr. Darcy. He is not, especially, Austen’s Darcy, who is famously awkward and impolite. After all, the most famous line said by Austen’s Darcy is the one Elizabeth overhears when she first meets him: “She is tolerable; but not handsome enough to tempt me; and I am in no humour at present to give consequence to young ladies who are slighted by other men.” What kind of man says that out loud? A rude one, that’s who.

The Jane Austen Centre’s Darcy is the Darcy from really bad fanfiction, the kind that only gets a few pity kudos on AO3 because it’s so out of character. He is polite. He walks on the street side of the sidewalk, holds up traffic so that old ladies can cross the street, and addresses every woman he sees unfailingly as madam. You can just imagine the actor going over his script, breaking it into beats and scribbling down all the synonyms for polite he can think of. “What’s my intention for this part? To be polite. To be courteous. To have . . . etiquette. To compliment them.”

And then, running out of words, he would start over again. “To be polite. To be courteous.”

And yet everywhere we went that day in Bath, there was not a question in anyone’s mind who the polite man in the poorly-made Georgian riding coat was meant to be. Everywhere we went, someone would cry, “Mr. Darcy!” and he would stop and pose with his walking stick while the camera shutters clicked, nodding politely to everyone who greeted him.

The Jane Austen Centre is not alone. The Wiki-How for “How to Find a Modern-Day Mr. Darcy” (yes, it exists and the illustrations are amazing) advises: “If your date opens doors for you (chivalrous), truly listens (thoughtful), is concerned about your needs (kind), and appears in most respects to be a thoroughly modern gentleman, he is very much a modern-day Mr. Darcy.”

In Mr. Darcy Takes a Wife, Darcy is “all gentlemanly solicitousness” from the very first page. And in Me and Mr. Darcy, our heroine swoons over Darcy’s “impeccable manners” and “chivalrous” behavior, explaining that he is the perfect man because he is “respectful and knows how to treat a woman.” Popular culture has performed one of its great switches: it has replaced Austen’s rude and awkward little nerd with a dashing romantic hero of impeccable social graces. Is it the repression that did it? Did the fact that it would never occur to Mr. Darcy to be vulgar, because one simply isn’t in Austen’s world, convince everyone that he is a model of courtesy? Have we chosen to ignore everything that goes on beneath the surface in Austen’s elegant but confined houses to simply revel in the elegance?

To see Jane Austen’s writing desk, you have to go to the British Library in London. It’s in a glass case in their Treasures of the British Library display, across from one of Shakespeare’s folios and a few cases away from some Beatles sheet music. It is a very small desk, and foldable, designed to be easily stowed away, which it must have been often; Austen wrote in her parlor and would hide her writing whenever callers stopped by. At the British Library it is open, with very small spectacles pinned to one corner and the tiny notebook that held the first draft of Persuasion lying on top of it, splayed flat so you can see Austen’s fine, precise handwriting. Under the shadow of that desk, the disciplined confinement of her novels acquires visceral force. This much space was she permitted, and no more.

In the display case next to Austen’s desk is Dickens’s first draft of Nicholas Nickelby, in a notebook that dwarfs Austen’s entire desk, with generous margins and looping, scrawly handwriting. It is impossible for me to imagine what Austen might have done with that kind of freedom, that kind of certainty of her own right to take up space.

As Mr. Darcy pointed out Putney Bridge to us, explaining that it was just like the one in Florence, two teenage girls walked by and looked him scornfully up and down. “You’re not the real Mr. Darcy,” one of them yelled.

Mr. Darcy turned pale and clutched his walking stick, but he said not a word. It would have been rude. 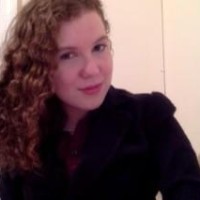 Constance Grady lives in Queens and toils in obscure branches of publishing. Follow her ramblings on Twitter or Tumblr.