So is taking your time.

These are three of the most important lessons I learnt at university.

The week before the first day of classes, international students and out-of-state students who couldn’t make an earlier day all moved into the dorms for our last orientation session. We got to our rooms first, had a chance to settle into this new environment – which was, for the majority of us, our new home in this new country. The dorms were still empty save for us kids from all over the world; we met in the halls, at night on the “strip”, our accents mingling and flowing, already forming little groups that we would all fall back on in the years to come. I found my home that week in the Caribbean massive, populated mostly by my fellow Trinis. In that week when we were all masking our homesickness with excitement, the familiarity of your neighbour was like entering a new space with someone holding your hand, even if all that was comforting was the way they sounded, the way they talked.

The second week all the other students moved into the dorms and we found ourselves separated, our quiet little homes disrupted and invaded. The third week, a group went up on Facebook: “My roommate is a Trini, what the fuck is they saying?” The next day I started defining words immediately after I said them. Soon I was switching out “lime” for “chill” or “hang out”, “wuz de scene” for “what’s up” or “what’s going on”, “hoss” for “dude”. My language became slower, more deliberate; my words and conversations more thought-out and conditioned.

By the time I graduated, the Caribbean massive was a memory of my early university days. I had surrounded myself with that which I (at least some part of me) aspired to be: white, privileged, identifiably American. My language reflected that. My accent was now the quiet Trini, the acceptable British intonations that come with speaking proper English from back home. The quick cadence of my tongue left me, slowed to a lilt, something approximating the exotic otherness Americans (especially American men) loved. Appealing enough to stand out in rooms of people, in interviews and meet and greets, but soft enough that I would not immediately be regarded as another brown immigrant fighting for the American dream.

When I moved back home, the difference was stark. “Freshwater Yankee. Yuh not even gone full time and hear you.” Here there was no benefit in this new accent, my new words, my slower tongue. I was home and people still asked where I was from. To relearn the language was to speak in a way I never had before I left. I overcompensated with slang and dialect. All my “r”s were dropped off the ends of words; already contracted words (don’t, can’t, won’t) contracted even further (doh, cah, woh); “th”s no longer existed.

On that first day of orientation, afraid to meet new people, struggling to keep my anxiety in check, hearing the Caribbean accents around me – their fears and excitement echoing in the strain in their voices – calmed me. Each island is different, but there is a strange consistency among Caribbean accents. We share a similar history, a similar upbringing, similar words, similar highs and lows in our speech. There’s serenity in knowing you are not alone. In those following weeks, after the invasion, I could hear the subtle differences in all of us. We were all now speaking our best English, as “standard” as we could make it without losing all of what made us us, without giving up the one thing that tied us to home.

It never occurred to me, though, that at home I would still not belong.

In Trinidad (and Tobago) the way you sound, the way you talk, can tell people where you are from, where you went to school, what kind of job you have – it determines people’s entire perception of you and your life. In certain spaces the proper English I learnt in private schools sits loftily above the Trini English I learnt at home, in the schoolyards, in soca, from The Schoolmaster and Earl Lovelace. These spaces exist in the “professional” world, at work, in the classroom, in business meetings, at the fahncy events of the cultural elites. My upbringing mirrored this. I was constantly fighting between the two “languages” – admonished by my mother to always “speak properly” as we learned in school, and made fun of on the weekend when I played with my cousins. As a child I was always jealous of them, their freedom with words, their ability to sound “normal”; to sound like my parents, my aunts and uncles; to go to the public school down the road and not the private school in town (the city); to never be laughed at for how they spoke.

As I went through secondary school (another private Catholic school), there was a precise way in which all the girls in my school spoke – straddling the two modes of speaking, we found our own voices. And when outsiders laughed, we laughed too. We belonged somewhere after all. We shared an identity. Everyone knew this is how con-vahnt girls spoke, our accent was more identifiable than our uniforms. There was a lilt in our voices and more than a little bit of a pretentious air when we spoke. Now, years after I graduated, even after the accent has changed and I’ve melded something different altogether, I can still be picked out as one.

There are others like me, who’ve come home from abroad and subconsciously over-corrected, attempting to sound like a place they’ve never been and will never visit. Then there are those who’ve been over-correcting their entire lives, whose skin colour, income bracket and address already made them stand out in Trinidad; those who go abroad to study and their accent gets thicker as if trying to prove their Caribbean-ness to everyone they met, because yes, there are white people in the Caribbean.

I took a trip recently with my best friend and realised that I was still adapting my accent to my environment. With her, I spoke like myself, just a little muted, but after the first night out, repeating every other word I said for guys who approached us at the bar, I reverted to that university accent. In a city in Central America, in a bar overrun by tourists – American and European – I confused more than a few there. I fielded continuous requests to repeat whole sentences and received many a compliment on my grasp of the English language, even from men for whom English was their second or third language.

I think I’ve always been aware of those three lessons, and will always have some use for them – slow down, enunciate, clarify. And there’s another lesson I’m realising I’ve known all along: there is a time and place for everything. It has been widely acknowledged that a certain language for certain people in Trinidad can bring respect and privilege. Our national language, Trinidadian Creole English, is rejected and mocked in some spaces. It can make you sound “uneducated,” so I’ve heard, even if you hold a degree. It can make you sound “classless,” whatever that means. It can cost you that job you just interviewed for. But without it, your entire identity is called into question – you can’t possibly be from here, have been born and raised here, want to be here; love here, cherish here, know here. 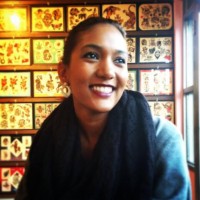 Denece Mohammed is an actuarial student living and working in Trinidad and Tobago. She writes mostly about herself -- her family, love, friendship and feminism -- and mostly for herself.